Trump Impeachment is the Scott Walker Recall All Over Again

Posted by Mike LaChance on November 30, 2019 18 Comments
A few years before Trump won the 2016 election, there was another effort by the left to undo the results of an election. Remember the repeated and unsuccessful efforts to remove former Wisconsin Governor Scott Walker from office?
Read More 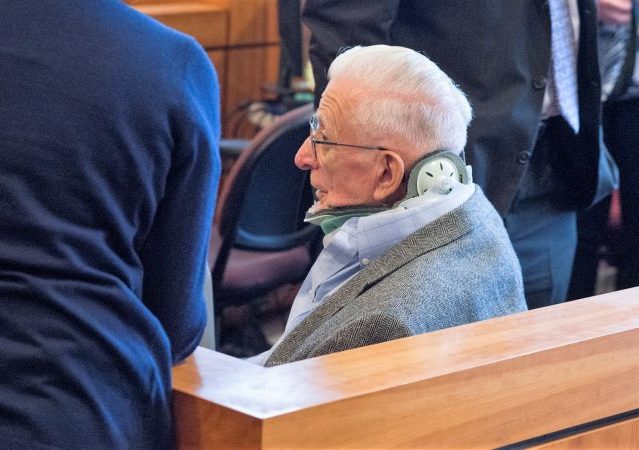 Posted by William A. Jacobson on June 15, 2019 95 Comments
The Gibson's Bakery massive verdict against Oberlin College has sparked incredible reader excitement, and brought many new readers to Legal Insurrection. I've spent the last week trying to absorb what is happening. The reactions to the compensatory and punitive damage verdicts remind me of only a few times in Legal Insurrection's almost 11-year history.
Read More

Scott Walker revolution on the line in Wisconsin

Posted by William A. Jacobson on October 31, 2018 14 Comments
Oh what a night. That was the post I wrote the day after Scott Walker defeated the recall effort against him in 2012:
Read More

Posted by William A. Jacobson on November 09, 2017 16 Comments
Scott Walker's 2012 recall election wasn't the first election I ever covered, but it definitely was one of the most intense. It was what I called Wisconsin’s Long, Strange Trip, linking to our exhaustive coverage of all the crazy:
Read More 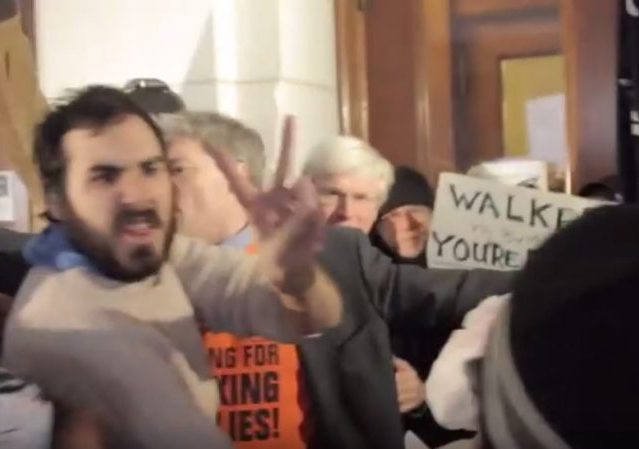 WISCONSIN or BUST – The “long, strange trip” and today’s primary

Posted by William A. Jacobson on April 05, 2016 98 Comments
All eyes are on Wisconsin. Before I get to today's primary, let's take a look back at one of my favorite political periods in the history of the world - the defeat of the Recall against Governor Scott Walker after over a year of protests against the public sector union collective bargaining reform bill. It was what I called Wisconsin's Long, Strange Trip, linking to our exhaustive coverage of all the crazy:

When Walker defeated the Recall late in the evening of June 5, 2012, it was Oh what a night. That was a time when the Legal Insurrection community was more united and cohesive, and thousands of us celebrated the win with the inaugural launch of website fireworks and John Phillip Sousa music:
Read More 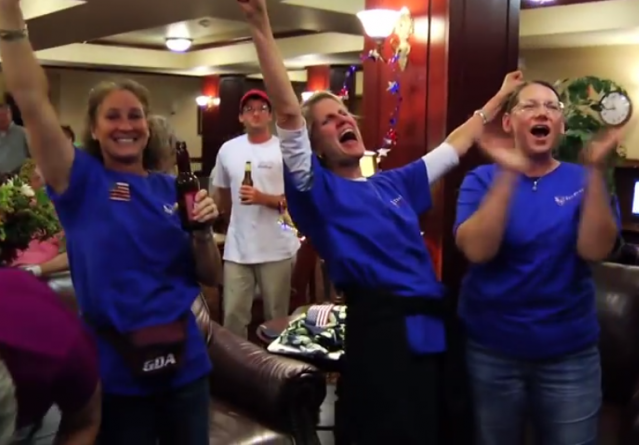 Posted by Mike LaChance on July 08, 2015 3 Comments
Time has really flown by, hasn't it? Would you believe the famous recall election that Scott Walker won in Wisconsin was three years ago? As you may recall, it was a big night at Legal Insurrection with fireworks and music on the site. Our Wisconsin Recall Tag has the history. Wisconsin first lady Tonette Walker tweeted out this reminder yesterday:

Can't believe it's been 3 years since @ScottWalker made history by winning the recall election! VIDEO: http://t.co/ruqOWAq403

Here's a great video from the Walker team to commemorate the event:
Read More

Posted by William A. Jacobson on September 10, 2014 10 Comments
We have seen this picture before in the Wisconsin's union-induced long strange trip during the 2012 Recall Election:

The collective bargaining law that precipitated the insanity recently was upheld in its entirely by the Wisconsin Supreme Court. Now the unions are doubling (or is it tripling, at this point?) down on the get Walker meme, via WaPo:
Read More

Posted by William A. Jacobson on September 02, 2014 26 Comments
We have written many times about the secretive John Doe proceedings in which Wisconsin prosecutors seized a wide-range of records from numerous conservative activists on the theory that it was a crime for such activists to coordinate issue advocacy with the campaign of Governor Scott Walker. In a federal lawsuit brought by two of the targets, Eric O'Keefe and Wisconsin Club for Growth (the "Club"), a federal district court judge enjoined the John Doe investigation finding, among other things, that the investigation violated the targets' constitutional free speech rights.  The court also found that the prosecutors advanced an invalid theory of criminal liability, since such coordination did not violate campaign finance laws. A state court judge earlier had made a similar finding. The John Doe investigators, who are defendants in the federal lawsuit, have appealed to the 7th Circuit Court of Appeals. O'Keefe and the Club filed their responsive appeals brief today. A copy is embedded at the bottom of this post. The brief is deep into the law, but it's the factual recitation which is riveting, detailing a prosecutorial conspiracy to sway the political process against conservatives and to undermine Walker. Here is the full Summary of Argument:

In February 2012, at the outset of a tough reelection campaign and battle for control of Congress, President Barack Obama's official campaign committee threw its support behind Priorities USA Action, a "super PAC" supporting Democratic candidates. "[T]op campaign staff and even some Cabinet members [would] appear at super PAC events," and they helped Priorities USA Action raise millions that it spent in support of Democratic candidates.[fn] Defendants launched and aggressively pursued a secret criminal investigation targeting every major right-of-center advocacy group in Wisconsin on the view that this kind of "coordination" between a candidate and supporters of his policies is illegal. They also claim the power to restrict speech on public policy issues based on an advocacy group's communications with a candidate, whether or not that speech has anything to do with that candidate's own campaign or election.

Posted by William A. Jacobson on January 15, 2014 13 Comments
We previously wrote in detail about the “John Doe” investigation in Wisconsin targeting a wide range of conservative groups and Scott Walker supporters relating to the failed Democratic attempt to recall Walker.  See Secret probe of conservatives makes Wisconsin ground zero in First Amendment war for the details. We also noted the Big defeat for anti-conservative Wisconsin “John Doe” probe, when a judge recently quashed subpoenas. In a new development, Eric O'Keefe, one of the targets of the investigation, is demanding that the prosecutors end the probe or face a federal lawsuit (full media release embedded at bottom of post):

Eric O’Keefe, who has been identified in media reports as a target of a secret “John Doe” investigation in Wisconsin, today demanded that state prosecutors end their action against him or face a federal civil rights action. O’Keefe is director of the Wisconsin Club for Growth, which was also targeted for alleged unlawful “coordination” with Governor Scott Walker’s campaign for fiscal reforms. “This investigation is political payback by elected prosecutors against conservative activists for their political successes in Wisconsin,” stated O’Keefe. “They are violating the constitutional rights of private citizens and must be held accountable.”

Posted by William A. Jacobson on January 10, 2014 14 Comments
We previously wrote in detail about the "John Doe" investigation in Wisconsin targeting a wide range of conservative groups and Scott Walker supporters relating to the failed Democratic attempt to recall Walker.[*]  See Secret probe of conservatives makes Wisconsin ground zero in First Amendment war for the details. Good news.  The subpoenas issued in the secret probe have been quashed in a secret court ruling uncovered by the Milwaukee Journal-Sentinel, Secret ruling deals major setback to John Doe probe into recall elections:

Prosecutors in the John Doe investigation into spending and fundraising during the raucous Wisconsin recall elections were dealt a major procedural blow Friday, according to sources. The five-county investigation remains open, but subpoenas issued in the probe to conservative political groups supporting Gov. Scott Walker were quashed, sources familiar with the development said. The ruling — which is sealed — raises First Amendment concerns about the subpoenas. The Journal Sentinel has not turned up any Democratic candidates or liberal interest groups involved in the recall elections that have been contacted by John Doe prosecutors. "The John Doe is still open," said one individual familiar with the case. But other sources said Friday's ruling seriously undercuts the well-publicized probe, launched in the summer of 2012. Those familiar with the case said the decision was handed down by retired Appeals Court Judge Gregory A. Peterson, the presiding judge in the investigation who took over the case in November.

One year ago – WALKER WINS!

One year ago last night Scott Walker won the recall election and Republicans kept control of the state Senate despite recall attempts. It was a long, strange trip. If you were here that night you would have experienced the camaraderie of other readers on our live...

Graeme Zielinski, Communications Director for the Wisconsin Democratic Party, was one of the key Democratic operatives behind the anti-Scott Walker intimidation campaign which we featured here so often around this time last year, Wisconsin’s long, strange trip. Zielinski stood out from the usual protest operatives because of his...

Today Wisconsin Governor Scott Walker will hold a "Beer and Brat Summit," fulfilling his recall-election-night promise to proactively repair the state, reeling after months of partisanship and rancor. "We've got some fantastic, authentic Wisconsin products that we will be sharing with legislators of both political parties...

It only took one panel discussion at Netroots to reveal just how divided the left is in its narrative over how to handle Wisconsin. Audience member Lisa Graves from The Center for Media and Democracy's PRWatch, upset with the panel's analysis of Obama's interaction with the Wisconsin...

Preparing for victory or to start a war?

Tuesday's recall election in Wisconsin won't be the end of the road for union organizers and radical leftists. No matter what the outcome is for Walker, Kleefisch, and the others, it appears that Wisconsin's role as host will continue. Worker's World reports that there are widespread...

Wisconsin Lt. Gov challenger chides nonvoters (but is he one himself?)

It surfaced today that Mahlon Mitchell, the democratic challenger to Wisconsin's Lt. Governor Rebecca Kleefisch, admitted on camera that he only got involved in politics in 2008--and it's questionable if he even voted at that time. Mitchell, who is the president of the Professional Fire Fighters...

As Wisconsin's Governor Scott Walker enjoys a more confident position with the release of new jobs and poll numbers, some on the left are backing away from the import of the outcome of his recall race. Two new polls released Thursday reveal that Governor Walker (R)...