On Saturday I documented the paltry turnout at MoveOn.org and union rallies around the country (other than Madison, which did have a good turnout).

In The Village Voice this morning, Roy Edroso took me to task for my estimating that the protest nationwide (outside Madison) likely did not exceed 100,000.  Edroso writes a column at The Voice titled, Exploring the Right Wing Blogosphere, another one of these people who looks at Tea Parties through binocluars, like on safari. 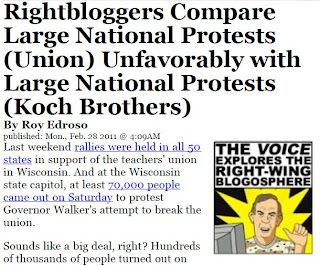 Here is the pertinent part of Erdoso’s column today:

“Last weekend rallies were held in all 50 states in support of the teachers’ union in Wisconsin. And at the Wisconsin state capitol, at least 70,000 people came out on Saturday to protest Governor Walker’s attempt to break the union.

Sounds like a big deal, right? Hundreds of thousands of people turned out on behalf of teachers in one state who were holding out for collective bargaining rights, despite opposition from Republicans and from bigtime “liberal” columnists who also consider schoolteachers grossly overcompensated….

You wouldn’t know it, though, from the report of Professor William Jacobson at Legal Insurrection, who flatly declared, “50-State Union Protest Falls Far Short Of Predicted Turnout.”

Edroso went on to list some rallies I failed to include, none of which were sizable other than one supposedly large rally in San Francisco:

There’s a problem here for Edroso.

In fact, this estimation was half my estimation, so surely that was some right-winger trying to smear the labor movement, right?

Wrong.  The source for the 50,000 nationwide number was a MoveOn.org spokesman interviewed by the liberal AlterNet website:

A MoveOn organizer tells AlterNet that at least 50,000 people came out in the streets across the country for today’s Rally to Save the American Dream….

Outside the San Francisco Civic Center, one of the dozens of protests in all 50 states drew a boisterous crowd of approximately 2,000 people.

I have e-mailed Edroso calling his attention to the error and asking for a correction:

“Thanks for linking to me, but you messed up your cite for the San Fran rally, the report you link to refers to “A MoveOn organizer tells AlterNet that at least 50,000 people came out in the streets across the country” that was not the count for San Fran itself which the article put at 2000. So the MoveOn.org spokesman confirms what I said, which was that the national number (excluding Madison) was under 100k. I trust you will run a prominent correction since you used that erroneous San Fran number to assert that I was wrong and biased in my own reporting.”

I will keep you informed.

[Note: I misspelled Edroso’s name in the original; that has been corrected.]

Update:  Looks like Legal Insurrection readers are on the case:

but, Edroso refuses to run a correction, choosing instead merely to strike through his wrong numbers.  That tactic is okay where the change in numbers doesn’t affect the entire point of the post, but the corrected MoveOn numbers disprove Edroso’s thesis that there was widespread support around the country.  Even MoveOn puts the number (outside Madison) at only 50,000, yet Edroso persists in his thesis that the right-blogosphere deflated the numbers.  Edrosos should run a prominent correction to his post, not just bury the error in a strikethrough:

I wouldn't count on that correction being posted. The Left lies. They aren't about to start telling the truth now. Remember the crowd quotes in the Restoring Honor (big) and Restoring Sanity (bust) Rallies?

Eat crow, lefty buzzard!! (After you wipe the egg off your face.)

When all this mess started in Wisconsin, I felt like finally, via Governor Walker, the taxpayers of Wisconsin had a chance to rein in the uncontrolled feeding at the taxpayer trough by the unions. Now that the police refused to carry out their orders (clear the Capitol), I'm not so sure.

Governor Walker seems reluctant to go hard-nosed on these people. And I can't understand why since he won with a sizable margin. It is obvious the average Wisconsin wants to control the spending brought on by lucrative union contracts. Where are they? I understand they have jobs they honor by going to, but what about Saturday and Sunday? There should have been a million pro-Walker Wisconsin citizens rallying for Walker this past weekend.

The unions understand the stakes. They know if Walker can get them under control, other states will follow. Not knowing Wisconsin law, I think Walker should have had the state police remove those protesters, not the county sheriff's office.

If Walker loses, and the unions win, we can look for more anarchy all across the nation. With the Marxist in the Oval Office, the communists/socialists/Marxists are now emboldened and they are going to take advantage of a sympathetic POTUS.

Michelle Malkin managed to squeeze a "redaction" of a claim by a liberal rag (I won't name the scumbags but you it can be found at Malkin's blog) but the "correction" was more offensive than the original offense. The rage referred to her as a Fox News "professional entertainer" rather than the experienced journalist that she is. So get ready for a correction attached to a brick.

Every time a Lefty Blogger Lies, a Moderate gets their Conservative Wings! 🙂

Here is the link explaining my prior comment about Michelle Malkin:

You read what you want to read, which is why it is so hard to proofread your own writing. Edroso wanted a big number, and there was a big number there, so he read it the way that he wanted it to be.

You see what you want to see, which is why the mainstream media can find hate in Tea Party protests but not in leftist protests. They are trying to report honestly, but their biases influence what their perceptions. If they would recognize that they have biases, we could start a dialogue.

I would be shocked if Madison DIDN'T turn out a huge number for a Progressive Leftist union rally. Madison is like Berkeley for the center of the nation. Many of the country's hardest-core Leftists can be found there.

Thanks for the info, Professor. I've corrected the info in the post. As to your claim that I "asserted" that you were "biased in [your] own reporting," I don't see where I said that — can you point it out? I *did* say you missed several rallies, and you did.

@Edroso – "But the weekend events were nonetheless impressive. You wouldn't know it, though, from the report of Professor William Jacobson at Legal Insurrection …. " that sounds like an accusation that I skewed the numbers downward. The MoveOn estimate proves that turnout outside of Madison was not impressive, and everyone knows it. The change in the numbers was central to your thesis, so you should correct the thesis not just use a strikethrough. Also, you should make clear that the rallies I did not include would not change the result, which is that turnout was low overall nationwide.

Oh he's a slippery one to the end. But you caught 'im anyway.

It's like watching Hillbilly Hand Fishing on Animal Planet. 🙂

"As to your claim that I "asserted" that you were "biased in [your] own reporting," I don't see where I said that — can you point it out?"

Doesn't matter that you pointed it out (he only leads off the article with that charge). Since he didn't use the word 'bias' outright, he'll rest on his claim that you're lying.

I'd say dealing with this sort is like dealing with children, but that's not fair to children, who are often quite honest. It takes time to learn to lie. Especially to yourself.

When you have to resort to peddling blatant lies and hoaxes to prop up your failed ideology, your posts become a waste of everyone's time. One lame excuse and lie after another for why the policies for which you push never work, and now the Left is at the point where it has to lie about facts because you can't scare up a decent crowd of supporters even when you astroturf them in (with taxpayer money no less!). Keep on trying to defend your failed ideology, I'll just keep on laughing as I witness the the core progressive left (centered around the notion of promulgating socialism) is effectively dying–and thrashing around as hard as it can while it dies.

Everything you need to know about the left is in it's name: LIbEralS. Take the capital letters at their face value for they tell the whole story. What else do we neet to know?