Oh what a night

Oh what a night

What a night last night was.  It was as good as if not better than when Scott Brown won in January 2010.

Almost 20,000 people viewed the live feed during the 4 hours it was live.

I hope everyone enjoyed the fireworks display and music. We had fireworks firing off and exploding over the blog posts and music playing in the background, including John Philip Sousa’s Stars and Stripes Forever, Tchaikovsky’s 1812 Overture, Lee Greenwood singing God Bless The USA, and Kate Smith singing God Bless America.

This image doesn’t do it justice, but it’s the best I could grab: 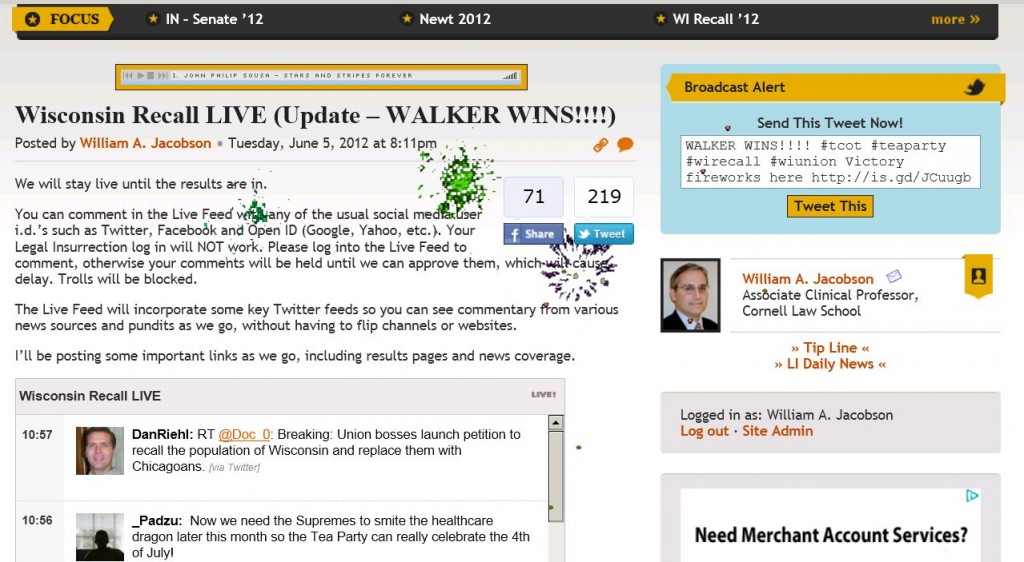 Here was my favorite comment on the live feed:

You may come to regret that suggestion.

Also, here were my favorite Tweets of the Night, in no particular order:

Walker now has a mandate to put liberals in re-education camps. That would be wrong, but he does have the mandate. #p2, #WIRecall #WIUnion

Throw a tantrum, get spanked.

I don’t think this means anything for the November election. Except that the liberal capacity for self-delusion continues to be infinite.

On Tuesday we saved Wisconsin; in November Wisconsin will save America!

Ah, geez! That’s what those black spots on my iPad were–fireworks! Heads up, Prof, they don’t come through so well on iPads! I thought something was wrong with it, until I realized it was only happening on LI.

Bill: Congratulations! The Stars & Stripes Forever with fireworks was a great innovation. (I played it overandoverandover last night.) Your blog, more than any other factor, was the motivating influence for me to help the “good guys” through contributions to both Prosser’s and Walker’s campaigns. It appears to have been money well-spent. Combined with the results in California, maybe this nation has sent a message to the socialists and union thugs. God Bless America! chuck

Loved the fireworks and music, Professor, but they froze my comment screen. No matter…nothing I had to say was half as good.

Ditto. It was great fun just to watch, anyway.

At risk of telling people stuff they know already…

and Twitter was…well…atwitter last night and into this morning with calls for assassination of Gov. Walker.

Two things I found interesting and worth exploring…

1. I didn’t see or hear any Collectivist or Mushroom Media type credit the TEA Party for this at all; and

2. I kept hearing about 7+:1 spending ratios. Somehow, I find that dubious, and would like to look under the hood of that claim.

Thanks for highlighting these. I knew of the first 2, but not the third. All are noteworthy — telling gems from this year-long fiasco.

Yes, the media would studiously avoid mentioning the Tea Party role in the Wisconsin win, but there were Gadsden Flags inside the Victory Party tent in Waukesha WI last night. If that isn’t symbolic, I don’t know what is.

5 out of 6 wins against recall insanity, but sad to say one cliffhanger of a loss, tipping the Senate to 17 to 16 in favor of Dems.

Easy to overlook in the importance of all the celebrating, but Walker couldn’t get anything done without the Senate votes to pass his reforms. Now he will have a challenge to do things in the 2nd half of his term.

We wish him well in that, he deserves the opportunity to further reform the state.

It’s hard to get too down about this today, but still sad to see.

Not to worry, Al. If I understand correctly (H/T Ace), the Wisconsin legislature is not set to convene until after November and that seat is now gerrymandered to almost guarantee a Rep win then.

Although a loss is never good, the dems’ takeover of the state senate is pretty hollow. The legislature won’t meet until the fall. There will be another election in November, so the loss can be recouped almost immediately.

In effect, the dems now have a slender, one-vote majority in a lame-duck senate. That’s ALL they have to show for a year’s worth of sound and fury in Wisconsin!

The unions and the Left did their worst in Wisconsin,but the republicans withstood the onslaught. All in all, it shows the abiding strength of the Tea Party in politics. Woohoo!!

I can see November from my house!

Obama won Wisconsin handily in 2008, then arrogantly said “I Won” was a mandate for the transformation of America and declared:
“We” are who we’ve been waiting for.

In 2012 he’ll receive the message
Remember Who “We” Are !
http://www.youtube.com/watch?v=RHtVxDz43KY

I wasn’t familiar with Kristin Branch. Very nice. Thanks, OcTEApi.

Krista became popular through a bunch of appearances at Tea Party Express rally’s throughout 2010 and through performances and theme songs for Republican primary candidates.
She’s fabulous, hope she continues to get more appearances.

(In response to DWS not Axelrod.)

@DWStweets as opposed to Obama’s brand of divisive politics is noble and right.

“Come for the tears, stay for the hysterical snot bubbles.” — Iowahawk at AOSHQ live comments, 10:14 EDT.

Professor Jacobson: Your site was the go-to site last night. Best comments, funnest stuff happening. I thought that comment thing worked well. A couple of times the traffic almost overwhelmed things but it came back.

I have been collecting the tears of the left to kill garden slugs. I am not sure I would want to each veggies that they touch however.

I predict this will be the most important election live feed as soon as this November election, assuming Jacobson repeats then and the server can handle the load. The rapidly growing influence of the blog flowing from Rush’s tweet and all the coverage Jacobson’s getting from various stories he’s breaking is something to behold; has any political blog even taken such a steep upward trajectory? Amazing to think Jacobson has a real job, too!

Should be “ever taken.”

I hope the governors of all 57 states (sic) take notice. Especially the Republican ones (we’re coming for you RINOs)

The 1% have been put on notice. The fourth branch of government, the bureaucracy, needs to reevaluate its priorities.

The left wing narrative (propaganda) being pushed on local and national news sources this morning was that Walkers win was a testament to big money private donations and the influence of SupePac’s.

//snarc on//
Which is so not like the big money and influence of public unions.
//snarc off//

The extreme wages and benefits and unaccountability (can’t be fired) to the average taxpayer. Where they essentially declare direct (collective bargaining) access to plunder taxpayers bank accounts is a right.

The fundamental problem is the political appointees of this administration. Those are the people who overrode the recommendations of the nonpolitical professionals with respect to oil drilling, “green investment,” and enforcement of voting laws, for only a few examples.

I admit that the EPA has gone starkers with respect to enforcement of environmental laws and selective enforcement of other countries’ laws, but that was via guidance from this administration.

The problem is not Barack Obama alone, but the entire political apparatus that came with him, and the irresponsible politicians that put their venal interests ahead of their country. We need to get rid of the politicians who thought it was a good idea to foist Barack Obama on us in order to install a kickback scheme for their contributors.

In case you are wondering, about half the Democratic Party at the national level will be willing to help with this task.

Especially interesting were several and repeated Democrat refusals to acknowledge the DOE’s 1705 loan guarantee program as a failure.
In case you’re not familiar this is the program funding Solyndra and the many other well documented government investment failures.
The Democrats were vociferously defiant that Solyndra and the other crony capitalist Hells Kitchen of “green investment” programs like them were minor blips that just needed tweaking around the edges.

We still have to deal with this nonsense about the exit polls. All I hear is that these polls showed Obama hammering Romney. Never mind that they underestimated Walker’s margin of victory. No, that’s not important. What’s important is that Obama was unaffected by Wisconsin and he still remains The One in that state.

I guess when your trains wrecks as badly as the Democrats’ did in Wisconsin, you have to pull something positive out of it, even if it’s something imaginary.

Let ’em have their exit polls. Throw a bone to the dogs.

Thank-you Professor Bill for all your hard work! The live feed was great and transported me into this wonderful virtual living room with a whole host of like minds, all well-connected, astute and informative. The Sousa and fireworks were icing and gravy! Never once last night did I even need to turn on the idiot-box to get information!

I’ve been eating so much schadenfreude for dessert this past week that I’ve gained 5 pounds and a couple of cavities! LOL!

20K? Wow. That was a really great way to keep up with things. Thanks so much!

Such a Night! Even Elvis agrees – http://www.youtube.com/watch?v=7kgm-vppxOY

Just one complaint about the celebratory music. It should have included ‘ON, WISCONSIN.’

Not everyone is so entirely enamored with cheese heads, especially so since Wisconsin recently tried to steal our Michigan mitten.

My favorite tweet of last night, from Charlie Sykes:

Seriously, this is going to last longer than four hours. Do I need to seek medical attention.— Charles Sykes (@SykesCharlie) June 6, 2012

My second-favorite tweet, from Ramesh Ponnuru, sums up the past year pretty well in just 8 words:

Kristin Branch should be the house band at every Mitt Romney rally and campaign event either live or paid to have her videos live on the big screen before Mitt arrives on stage.

American Idol background with talent from the south Wow

This and Gateway Pundit were my go-to places last night. Thank you very much.

[…] Oh what a night – Le·gal In·sur·rec·tion Also, here were my favorite Tweets of the Night, in no particular order: National recall election set for November bit.ly/yFRM9j #WInning […]

I am looking forward to another fun evening with the Professor and friends Nov. 6th!

I so enjoyed the blog-party. The recording of Stars and Strips Forever reminded me of the great national military bands we have. Had I known there was going to be “fireworks,” I would have brought popcorn. The comments of the bloggers were heartening. And, and, the reason for the celebration was just outstanding. We look for more cause to be jubilant in the near future.