BlueCheddar is a Wisconsin “progressive” website that posted a video confession by an anti-Republican stalker who poured beer over a Republican legislator.

The stalker has been charged with disorderly conduct, but the conduct potentially was a felony battery under Wisconsin Statutes 940.20(4):

(4) Battery to public officers. Whoever intentionally causes bodily harm to a public officer in order to influence the action of such officer or as a result of any action taken within an official capacity, without the consent of the person injured, is guilty of a Class I felony.

The key issue would be whether there was “bodily harm” which is defined in section 939.22(4)(” “Bodily harm” means physical pain or injury, illness, or any impairment of physical condition.”) Mere pouring of beer would not be enough, but if it caused any pain to the legislator, it might be enough.  E.g., State v. Higgs, 230 Wis.2d 1, 601 N.W.2d 653, Wis.App.,1999.(“throwing a cup of urine at him which entered his eyes-caused a burning and stinging sensation”).

BlueCheddar also had quite a laugh over the incident, including a follow-up video featuring the stalker at a “we’re going to pour a beer on you” protest.

But a funny thing happened on the way to all the cheesy bravado and laughter.

The stalker clammed up when confronted by the press, and BlueCheddar has pulled the confession video from YouTube: 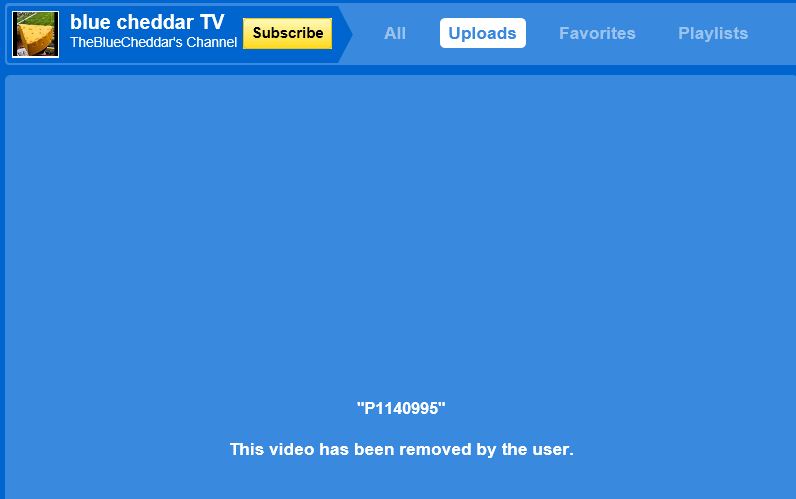 But the internet never forgets, or at least not the conservative blogosphere.  John McCormack, who had written about the video, also knew someone who had downloaded the confession, so the evidence is preserved:

The lesson the stalker will learn, unfortunately, is not not to commit the crime, but not to brag about it on video.

In Texas, when the cheddar gets blue, we throw it out along with any other spoiled items.

If his singing entourage ever forms a merger with the BDS singers … I fear the resulting artistic synergy could be absolutely unstoppable.

LukeHandCool (who is shaking like a leaf on a tree … of course, it could just be the nausea).

Some people just don’t listen because they won’t shut up.

WI Statute 947.01: Disorderly Conduct. Whoever, in a public or private place, engages in violent, abusive, indecent, profane, boisterous, unreasonably loud, or otherwise disorderly conduct under circumstances in which the conduct tends to cause or provoke a disturbance is guilty of a Class B misdemeanor.

The penalty for a Class B misdemeanor may include a fine up to $1,000, or imprisonment for up to 90 days, or both; however, for a repeat offender, the term of imprisonment increase up to 2 years.

I’ve said this before & I’ll say it again – the left just doesn’t get how this “Internet thingie” works.

Al Gore should have written an operators manual (recycled paper of course) when he invented the internet.

They think they are smarter than everyone else, but their just IDIOTS!

They believe they are so right and anyone who disagrees with them is so wrong that they can therefore do anything they want and always be right.

[…] about it.  What’s that?  The link doesn’t work?  Well, that’s because (as per Legal Insurrection) the Blue Cheddar Wisconsin Democratic shill blog (which put up the video originally) apparently […]

(I can’t help it.) Since this happened in a bar, can be be considered to be Beer Battered? 🙂

Instapundit » Blog Archive » MADISON, WISCONSIN: A place where “people seem to have acquired the idea that the usual rules don’… | September 19, 2011 at 5:05 pm

[…] example, why is it ok to pour beer on Republican lawmakers?  Shower glitter on Michelle Bachmann? Or throw shoes at John Howard? These acts are now […]

The greatest irony is that the beer spiller – a professional Madison protestor as of late – got DAYS of air time saying he and the protestors of Governor Walker’s policies were the victims.

Complete stalking and bodily assault against an elected official. The FBI should toss this YOU-HA in jail for eighteen months and let him re-consider his choices.

How is this not clear to all?

If I were to dump a beer on a police officer, I’d be in jail for 6 months for assault. Guaranteed.

I know someone that did 6 months in VA for assault for saying, “Don’t be an a**hole” to a state trooper.

Speaking of which, remember that Democrat state assemblyman in WI that told the female Republican, and I quote, “You’re F*cking dead” on the floor of the statehousee immediately after she voted on the bill to stop the state from collecting union dues? What happened to him? Nothing!

Well, if it is a felony and this BlueCheddar is involved in the promoting this activity….perhaps there is a RICO action involving a criminal enterprise…..

see if that works for them….

As anyone here who works in LE can attest; if criminals didn’t brag about their criminality, half of most crimes would go unsolved.

Most criminals are stupid and/or arrogant. It’s part of why they’re criminals.

I love to see cheap shot braggarts get their comeuppance though.

The left does this all the time; the right plays by the rules and the left cheats and then claims they’re smarter, cooler and more deserving but they’re just freeriders on other peoples discipline, courtesy and optimism.

This sort of thing will not stop until there is more concealed carry. At that point it will stop completely.

I’m not clear why this guy has not been arrested. I have not seen the beer incident. But if I saw someone coming at me in a menacing manner, beer mug raised as if to hit me with it, I would take defensive action of one sort or another.
Isn’t this incident similar to the Supreme Court scuffle? One Justice coming at another in a menacing manner and he raises his hands to protect himself? What is happening to our society when one group of people believe that they have the right to assault someone without paying a penalty?
Ultimately, this is not going to end well.