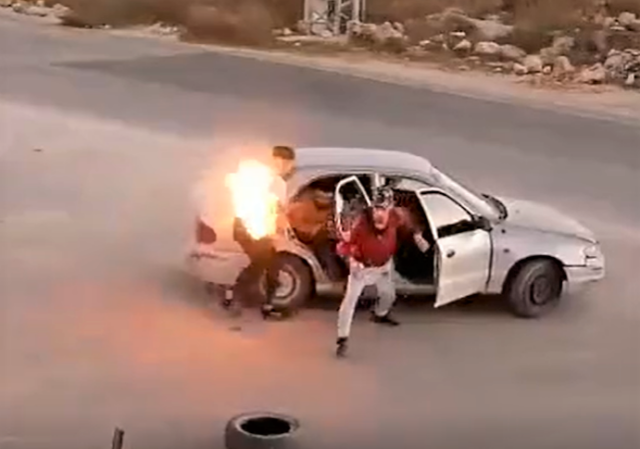 Here we go again. Another example of a Palestinian Work Accident.

The incident took place outside Kibbutz Migdal Oz in the Gush Etzion area of Judea that was inhabited by Jews prior to their explusion by Jordan after Israel’s War of Independence, in an area that all “two state” proposals have shown remaining with Israel:

Migdal Oz was established in 1977 on the site of Migdal Eder, a Jewish village destroyed 50 years previously early in the course of the 1948 Arab–Israeli War. The name is taken from a Biblical phrase describing God, written in Psalm 61:4 and Proverbs 18:10.

Gush Etzion and Kibutz Migdal Oz have been the scene of many terror attacks, including a shooting in 2018:

Gunshots were fired from a car with Palestinian license plates near the West Bank settlement of Kibbutz Migdal Oz on Sunday night in what the Israel Defense Forces called an attempted terror attack.

I can’t find other reports on whether the extent of the perp’s injuries, or whether he was captured.

The perp joins many compatriots who have died or been injured in Palestinian “Work Accidents”:

Is the car okay?

This made me laugh.

I was hoping to see them run the windows down to get more air.

Is there a terrorist OSHA?

I love a good terrorist-lights-himself-on-fire/blows-himself-up video.

Instant karma gonna get you.

Looks like a worker’s comp claim as well as a product liability claim.

I’ll hand him this: he didn’t run away screaming. Whether intentional or not, he used the car seat back to smother the flames.

It is possible, that these self-immolations are relatively frequent, so as to ameliorate further harm, the Palestinian schools teach their children . . .

“Stop, drop and blame the Zionists for everything”

Such a violent, hate-filled people, those Arab Muslim, so-called “Palestinians.” The Islamic ideology is in desperate need of an internal reformation, to cleanse it of its intrinsic pathologies — to wit, supremacism, totalitarianism, belligerence and hatred of non-Muslims.

But then you could fit what was left over on a flashcard.

Saving throw vs Dexterity? I rolled a 1. That’s good, right?

They are environmental terrorist. All that work to get ride of a tire.

That dude is definitely the hottest pitcher in the terrorist baseball league!

Now, if only Milley and Austin blow themselves up…

In the immortal words of the inimitable Nelson Muntz ……..

The other guy couldn’t manage to light his tire on fire*, either. Pathetic.

(* Verbally, “laht his tahr on fahr”. Sometimes my Texas accent comes through.)

There was a huge tire fire in Winchester VA that burned for nine months in 1983 and smoked out DC regularly. It was a local sensation. Looky-loos would actually take day trips just to watch it burn.

Some wag took some paint to a major intersection in Leesburg and wrote “TAR FAR” on the pavement of the correct route out of town.

I remember when I had only been in VA for a year, and read in the local paper’s police log column that there had been a night-time burglary at “Smiths Tar and Battery.” I spent too long wondering why any business would sell those two things.

I saw this first on reddit /whatcouldgowrong (yes, a guilty morning pleasure). Most there were disappointed that the car didn’t go up like a fireball.

I love warm fuzzy sentimental human interest stories like this one.