Gaza: Ayman Jameel Zidan used his own family as a human shield. 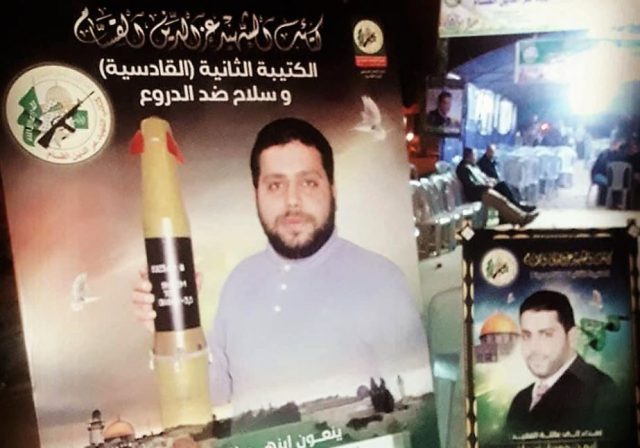 A “work accident” is a commonly used term to refer to Palestinian terrorists who die by their own hand when explosives or explosive devices they are handling detonate prematurely, or when a tunnel they are constructing collapses.

We have covered many such incidents:

Joe Truzman at his valuable weekly Ground Brief newsletter (to which you should subscribe) reports on the latest Hamas work accident:

The military wing of Hamas, Al-Qassam Brigades, acknowledged Friday [note – link goes to Hamas website] that one of their tunnel engineers, Ayman Zidan, had died. They were not specific about the cause of his death, only stating it was an “accident.” However, Qassam activists claimed Zidan was working on a tunnel underneath his home when it collapsed and killed him.

Here is the announcement from the Al-Qassam brigade, the military wing of Hamas: 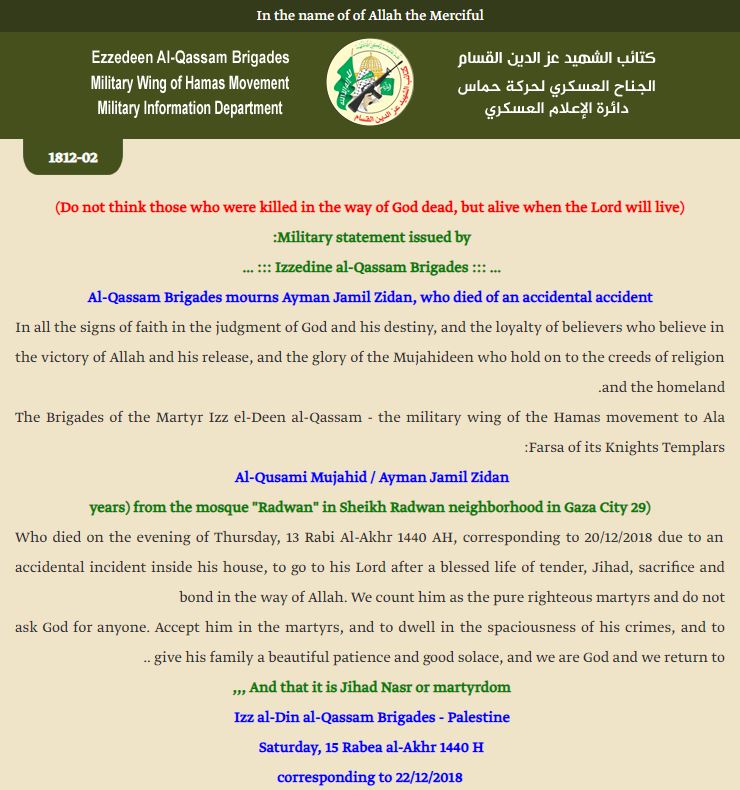 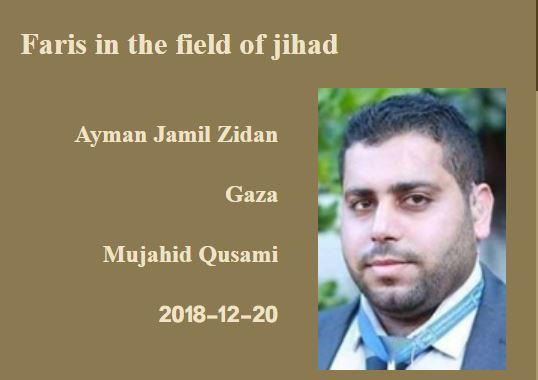 Additional information was posted on a pro-Israel Facebook page:

Zidan was killed in the collapse of a hole he dug in his home (6 meters deep).

A terrorist was killed yesterday in a tunnel collapse in Sheikh Radwan in the Gaza strip his name Ayman Jamil Zidane 32 years old. 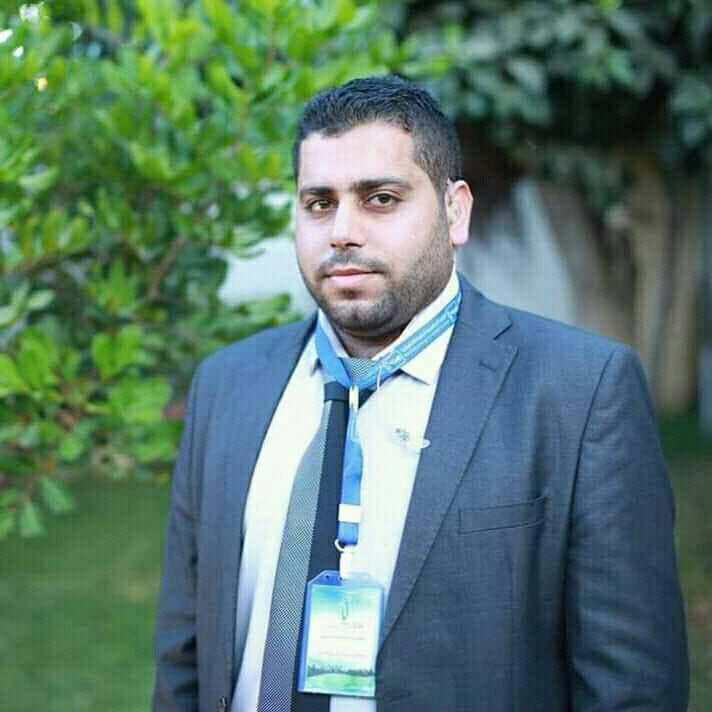 Truzman posted on Twitter this Hamas poster and banner from Zidan’s mourning tent: 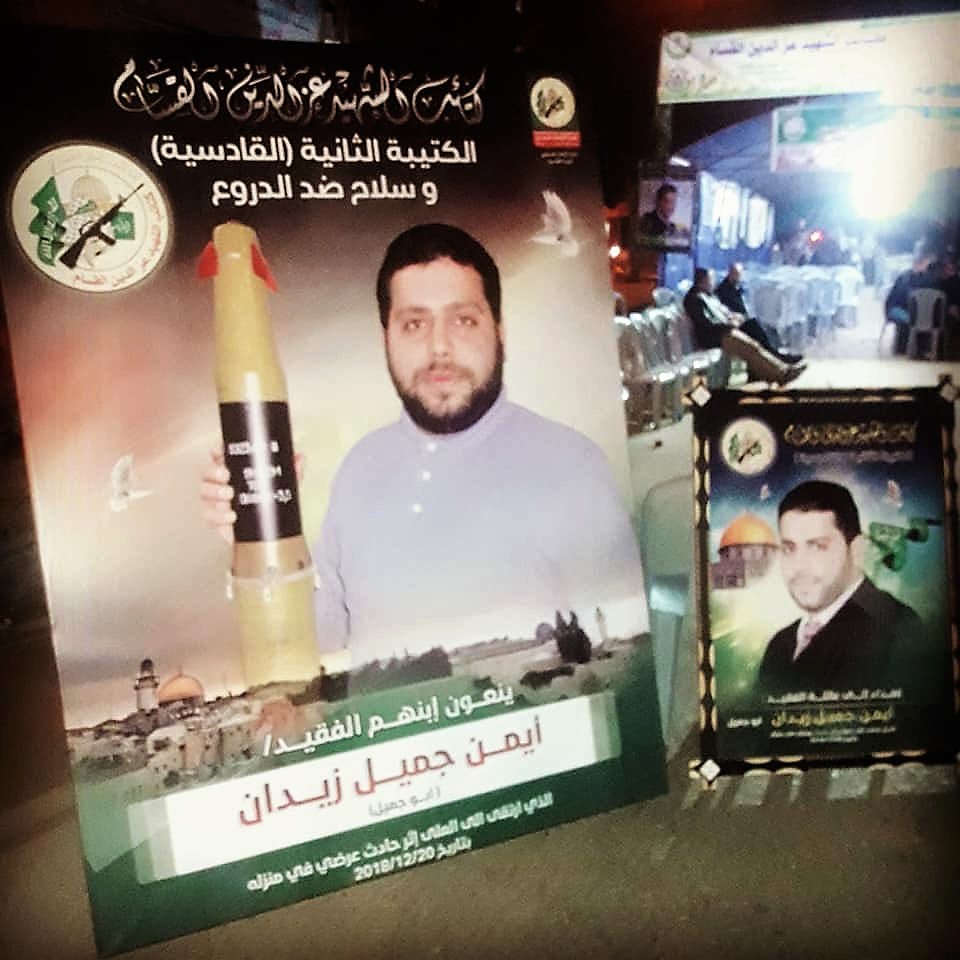 As with most of these work accidents, the most significant part is not the accident itself. It’s how and where it took place.

For background on Hamas’ human shield tactic, see our recent post, Remember, Hamas hides behind civilians and international media will try to cover it up.

So, are they going to dig his remains out in order to bury them, or are they just going to give a different twist on the family plot?

Another way nature keeps the a-hole population under control. In this country, we use four-way stop intersections.

Come to Portland where we have 4-way, 2-way, and no-way intersections. The no-ways are interesting, although to bicycles, all are no-way.

This isn’t far off.

Buried alive. What a way to go. Under his own house, occupied by his own family, too. Criminy. That’s just most definitely got to be some poetic something-or-other there.

Certainly not much of a “Tunnel Engineer”, that’s for sure, which definitely bodes well for Israel since he must have at least been somewhere in the general vicinity of the Hamas ‘gold standard’ given the lofty praising and the accoladed lamentations of the Hamas terrorists leadership.

Whole extended families, out to second cousins, should probably be made martyrs, allowed to immediately bask in their afterlife.

Don’t try this at home.

Naturally, one imagines what these infantile Arabs might accomplish, if they devoted all of the time, energy, money, foreign aid, and sweat equity that they currently spend on ceaseless belligerence in service of their jihadist imperative, towards building infrastructure, stable governments and a foundation for foreign investment, commerce and tourism.

I would say it was an act of God.

hopefully he did not go into the afterlife alone
but took most if not all his family with him ….

It is a shame that third world S***holes like this don’t have more underground gas lines. Guy hit one in Maryland about 20 years ago and the leak followed lines to 12 other houses that all went “poof” thankfully midday when unoccupied. Who knew that there were DIY fuel-air munitions.

If only there were some sort of “call before you dig” program. /s

You know what really stands out about a lot of these photos of work place accidents? Just how rotund many of those killed in workplace accidents look…which isn’t a bad effort given how they are supposedly living in concentration camp like conditions.

Somebody (probably the U.S. taxpayer) is paying them.

File another claim with Mutual of Gaza…

I love stories with happy endings.

They should all be forced to live in Gaza. Doh!

It is VERY UNFORTUNATE that several HAMAS leaders were not in there with him.
Now that Israel knows that border civilian houses are being used maybe drone surveys of these houses would reveal “excess” dirt being removed as a clue. Tunnels have always been used throughout history in warfare. Should come as NO surprise! Especially right now, the drug dealers use them between Mexico and US, using empty warehouses, etc..

Let me guess – it’s Israel’s fault that this guy died?

Why, yes. His tunnel collapsed because Israel restricts the import of concrete, because it can be used to build tunnels…

State and federal OSHA types investigate workplace fatalities here in the US. One of the absolute slam dunk guaranteed criminal citations accident is collapse of a ditch or tunnel–for failure to properly shore the sides. You can maybe persuade the OSHA inspector not to issue a criminal citation for other sorts of industrial fatalities. But a tunnel or ditch collapse? The foreman and some company execs will do time in the slammer.

Too bad this guy’s supervisors weren’t with him.

Remember in the Roadrunner cartoons how that violent Wile E. Coyote would paint a tunnel on a rock wall, but he would be the one smashing into it? You can learn a lot from those old cartoons.

There are a lot of Wile E. Coyotes in government. At least McLame is gone.

Okay, I have had it with this terrorist being called an ‘engineer.’ He IS NOT an engineer. He digs tunnels to undermine Israel. He is a sand dog. I AM an engineer, BS and MS in Aeronautical Engineering. And none of my engineering projects ever killed anyone.

Engineer? He didn’t even qualify as a mole or gopher.

Engineer? He didn’t even qualify as a mole or gopher.

I think special mines should be planted deep in the ground along the border at several depths and varying distances. They should designed not to detonate from surface actions.i am certain there is no technical problem designing them nor legal prohibitions.

We really need a laughing smilie along with a clapping smilie for heart warming stories like these.

“Brigades engineer, Ayman Jameel Zidan, died overnight after ‘a hole he dug in his home collapsed.”

I guess “engineer” is Hamas PC for ditch digger.