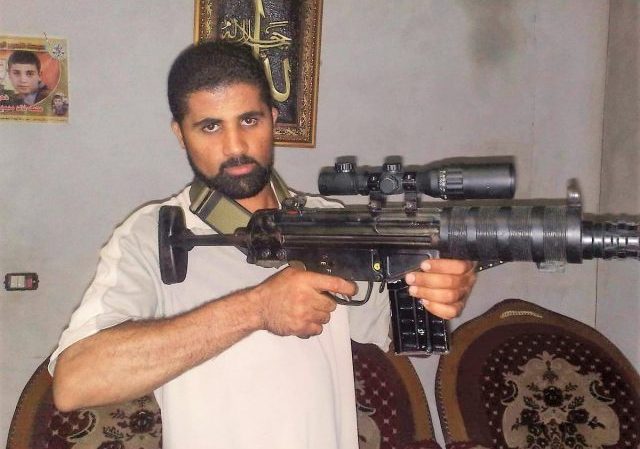 We have covered numerous examples of Palestinian terrorists blowing themselves up during what are called “work accidents.”

In some of the cases it’s clear that it was a self-inflicted martyrdom, in others it’s suspicious that perhaps the Israelis had a hand:

Two Palestinians were killed and one was wounded in an explosion on Sunday in a building in Gaza, health officials said….

“An explosion took place this morning in a house west of Gaza City,” police spokesman Ayman al-Batnijiy said. He gave their ages as 35 and 13.

“The police launched an investigation into the cause of the explosion.”

Israeli media identified the victims as Ahmad Mansour Hassan, a commander of an Al-Aqsa Marty’r Brigade missile unit. He was apparently killed while preparing a rocket. The explosion also killed his son, and a third individual was critically injured.

The Times of Israel has more on Hassan’s career:

The head of a missile unit belonging to an offshoot of the al-Aqsa Martyr’s Brigades was killed in a mysterious blast that rocked central Gaza on Sunday morning, Palestinian media reported….

Ahmad Husan was the head of the missile unit of the Ayman Jawda Group of the al-Aqsa Martyr’s Brigades, according to the Ma’an news website. 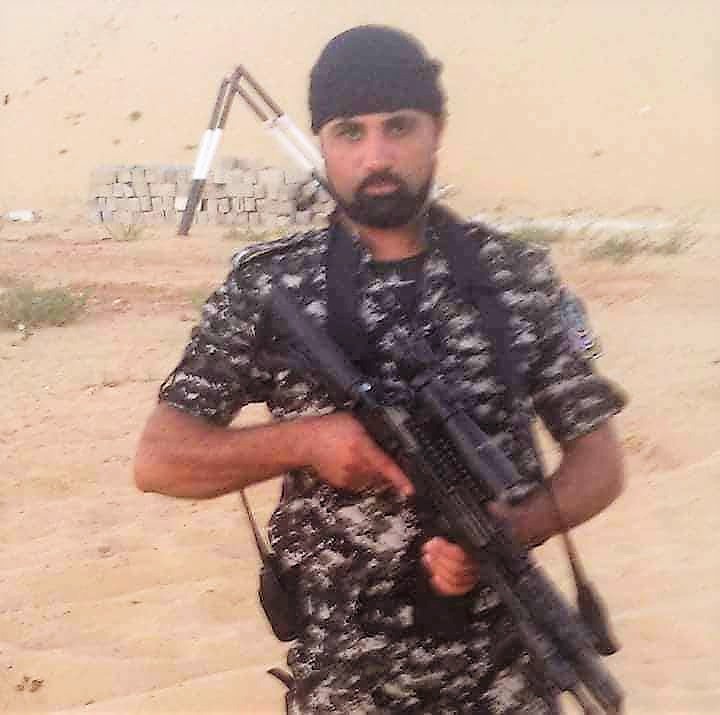 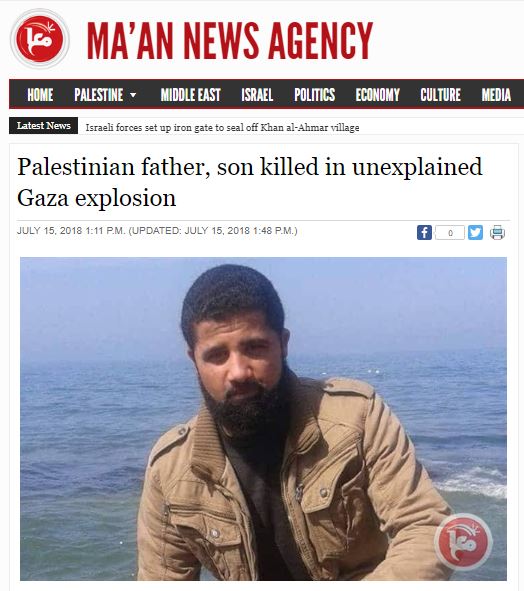 Palestinian media is raising questions as to whether this really was an accident (via Google Translate):

Palestinian sources said that an Israeli reconnaissance plane bombed the building near the Shifa Medical Complex west of Gaza, while other sources suggested that the explosion was caused by an accident.

So was it really a work accident? In other news,  in 1996 Hamas master-bombmaker Yahya Ayyash’s cell phone *accidentally* blew up when he was holding it to his ear.

Dontcha love it when a plan comes together?

The only thing I love more is when, in an excess of piety, they occur in the basement of a mosque.

Hopefully in the midst of the weapons cache.

What, your church or synagogue isn’t where you stockpile weapons?

Evolution in action, even taking out his son. This clown definitely deserves the Darwin award. rather he blew himself and son up, or he aggravated Israelis enough to get them to help along, he and his fellows are a stupid lot of ingrates.

We making sh*t up again.

Well, if Mossad can control the weather then they can cause a rocket to explode “accidentally”, no?

As a wag posted on twitter, “He died doing what he loved.”

Apparently no OSHA in Palestine.

Accident? Note that he was a “rocket commander” not a “rocket scientist.”

Commander where the explosives mutinied.

Yeah, that’s the problem with homemade bombs—sometimes they blow up at home.

On a lighter note, he’s dead.

I recall touring a facility south of Houston that manufactured high explosives for oilfield use. All of the equipment was in bunker like structures, every safety precaution was followed, and the actual manufacture of the explosive components was handled by remote controlled machinery, with 6′ thick concrete walls between the components and any human.

And in spite of all the precautions, every few months one of the assembly stations would get wiped out by an explosion, because that stuff is just nasty that way.

Compare that to one of these pali’s with all of his components just kicking around the top of his workbench in some garage.

Yes, as a matter of fact! Worked for them in another life.

The Palis used to have cars before they torched the one border crossing where the gasoline pipeline runs from Israel to Gaza and burned all the tires near the security fence.

Now they have “man caves” and “home workshops.”

These facilities usually have roof panels which are designed to swing upward, directing the force of a blast and everything it is moving up.
I designed automation for a few decades, including some for munitions.

Ahmad: Honey…have you seen my bomb making book?
Mrs Ahmad: No, Dear…..
Ahmad: Let me see…is it the red wire goes here, or the black wire?

You know, sometimes the cause really does not matter – only the results.

It’s been said that terrorists “are always a threat to someone.” To which I’ll add “even if it’s only to themselves.”

In more than a few of these cases the accident is arranged by his colleagues. These “Palestinian” fighters are little more than common street criminals arranged in gangs. They have turf wars like all such thugs.

Does his home owner’s insurance step in to help the family?

Perhaps Legal Insurrection commentators would be willing to chip in and send a “Spam & Cheese” snack tray for the throngs of loyal Pali’s honoring his remains…that were scattered over a 10 square block region… There’s nothing as tasty as “Spam and cheese” on a saltine.

So if Ahmad Mansour Hassan had a work accident…can he apply for workman’s comp?

Ahmad Mansour Hassan as a kid….

If the PA pays the families of people who died while attempting to kill Israelis, then without irony, yes, his surviving family will most certainly be able to get compensation for this “work” accident, precisely because it was an accident in the course of the work he was employed to perform. Surely you meant that question rhetorically.

I am sure as part of Trump getting NATO to cough up more cash, they Euros are expanding AD&D coverage for the PA – in order to be…fair….

Surely you meant that question rhetorically.

No, I was being dead serious…
I’m in a terrorist fantasy league and Ahmad was my best player!
No, wait a minute…that’s not it either…
I was being sarcastic…

I think that the remains should be hit with at least four fuel air bombs, clearing a sizeable area of all life.

And America will be paying his workmen’s comp

Not anymore. Obama is no longer POTUS. Trump ended that.

Does he still get his 72 goats?

“Indeed, for the righteous is attainment – Gardens and grapevines And full-breasted [companions] of equal age”

The Quran describes the houris that good Muslims will receive as the reward in Jenna, the Islamic paradise. Not only do they have large full breasts, they have big brown eyes, and they modestly lower their gaze only lifting their eyes to look at their beloveds. And the Muslims will marry these houris.

And I love it when dishonest Muslims (not embarrassed westernized Muslims) try to hide the truth about what Islam teaches. So they deny that Allah promises Muslims eternal sex slaves, and 72 is the bare minimum as really good Muslims can get thousands, in heaven insist that the word houri has been mistranslated and it really means raisin.

And I cheerfully tell them, “If you say so!” Then I start citing the verses, and ask them, “Your idea of eternal paradise is where you marry the large-breasted raisins with the big brown eyes? Man, Islam is a whole lot weirder than I thought.”

It sounds like they are describing Ocasio-Cortez. 72 of her would be truly terrifying, even worse I suppose than the 72 Virginians they are going to meet (hate those typos).

One of the 72 virgins I imagine Ahmad is now engaging with.

Rather women or goats, none will be deflowered because Arabs are are completely impotent after dying.

One Palestinian mother to another–talking about their sons;

Poor old Ahmed
alas, he is no more
for what he thought was H2O
was H2SO4.

My parents always taught me if you can’t say something nice about somebody, don’t say anything.

That’s a nice gun. I hope it wasn’t damaged.

I think I’ve seen it before in pics of other Hamasholes. So if you makes you feel any better I don’t think it’s his. I think Hamas just loans it out so their “fighters” can take pictures with it.

This is my favorite pic of Ahmad; The Terrorist with the “Soulful Eyes”…

There he stands…in the family room, posing in front of grandms’a chairs and he’s holding…A GIANT GUN…with…HIS FINGER ON THE TRIGGER!!!!

I can only imagine the conversation that occurred later that day….

Mom: Ahmad, dear…..?
Ahmad: Yes, mother?
Mom: WHY ARE THERE BULLET HOLES IN THE WALL??????
Ahmad: Ahh…umm…we were taking pictures and…it was an accident!
Mom: Wait till your father gets home!!!!!

Where does the body go after one of those workplace accidents?

Where does the body go? In reality, the body pieces are gathered together by the Palestinian Eagle Brigade (pigeons) and digested….ending up as bird poop to decorate the local mosque.

What was the last thing to go through the “rocket commander’s” mind a split second after he knew he screwed up?

If obama or hillary clinton were working in the field for hamas (instead committing treason safely behind the scenes), they too would wind up blowing themselves up.

“Dammit, Ahmad; go out and put the zero back on the “Days Without a Workplace Accident” sign.”

I sold into the industry for a while….

How about posting the ages of these Islamists?
because to claim the Right of Return to a Mythical Palestine they would have to be over 72 Years old since 1947 was the last year Islamist Muslims outside of Israel were born within the borders of Israel.

don’t see many geriatrics or walkers tying those invasions… also the life expectancy in the areas and countries surrounding Israel is 73 maximum so very few are statistically alive.

Is any of their stuff tested by UL?

Is anyone going to nominate Ahmed for a Darwin Award since he spectacularly removed himself from the gene-pool? Might get an (dis)honourable mention?

That he took is son with surely should merit the award.

This must somehow be connected to stealing clouds from Gaza/

Now I can’t get that Elton John song out of my head.

I didn’t know there was a country named Palestine. Ohhhh, you mean ISREAL! Now I get it!

Israel needs to drive all the palestinians out, either back to Jordan, or into the ocean as fish food.

A “workplace” accident in a house? An odd spot for a workplace.

“…Yahya Ayyash’s cell phone *accidentally* blew up when he was holding it to his ear.”

Those “batteries” do have a penchant for exploding. Sue the manufacturer. LOL