“Work Accident” during Al Quds Day protest calling for destruction of Israel and liberation of Jerusalem. He joins a long line of people who have “accidentally” hurt or killed themselves while trying to do violence against Israel. 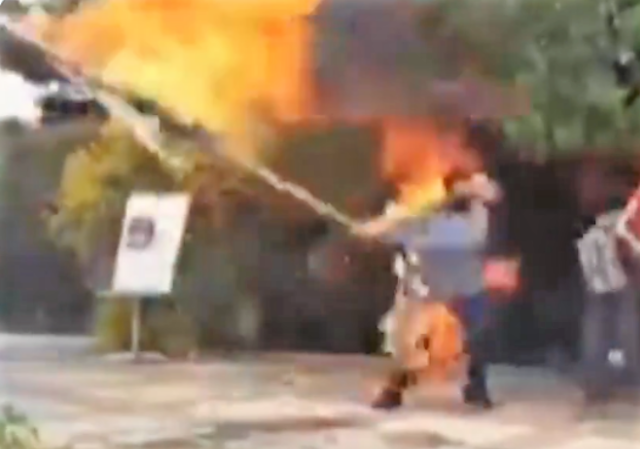 I’m not sure this technically qualifies as a Palestinian Work Accident, since the person involved was Iranian, not Palestinian. But he was protesting during Al Quds Day, calling for the destruction of Israel as part of a pro-Palestinian “Death to Israel” event.

Regardless, he joins a long line of people who have “accidentally” hurt or killed themselves while trying to do violence against Israel.

A video of a man in Iran ironically catching fire after attempting to burn an Israeli flag circulated on Arab social media on Sunday.

The video shows the man lifting a burning Israeli flag and attempting to wave it, before a sudden burst of wind causes the fire to quickly spread down the pole and to his clothes. The man responds by dropping the flag and running frantically – hopefully to a nearby pool.

According to Arab media that shared the video, the incident took place during a Quds Day protest held in Iran. Other people on the scene can be seen holding Palestinian flags.

Watch: A man in Iran catches on fire while burning an Israeli flag during a Quds Day protest. https://t.co/qv4NUU1OEE pic.twitter.com/9q0Cv6W7zI

Authorities in the Islamic Republic attempted to burn the Israeli flag, as they usually do. But this time, karma got them and they ended up burning themselves.

Meanwhile unlike the regime, ordinary Iranians increasingly refuse to burn or walk on Israeli and American flags. pic.twitter.com/flOKCA44wn

He is obviously a flaming idiot.

Maybe he should’ve started out with a smaller flag and worked his way up. All the other people in the crowd had smaller flags that were easy to carry, but this guy had a flag bigger than Michelle Obama’s ego.

Not possible…this flag at least fit on the screen.

Okay, replace “ego” with “oshiri” and see if that fits.

That’ll do as well…

No doubt that burst of wind came from Shaitan himself.

Why would you bring the Black Stallion into this?

I hope this video goes viral.

Fierce competition in the Iranian Follies … but the insane mob knocking the Ayatollah’s putrid corpse to the ground in the “funeral procession” is still very much in the lead.

BTW, the entire internet has been wiped of that video clip, which is one of the funniest ever in history. Wiped clean. “Like with a cloth.”

I saw one commenter describe that incident as “Khomeini Coffin Surfing”!

All the world loves a happy ending.

That flag should have had a warning on it: “Do not hold flag in hand. Place flag on ground, ignite flag and get away.”

My Arabic isn’t good. But as he is running away I think he says “I swear I’ll sue.”

Is there nothing the Mossad can’t do??

Bless his stupid little heart, that’s nothing compared with what awaits him in eternity.

guess the flag’s instructions were in yiddish–or chinese

God responds with a puff of his breath.