Palestinian media: “The Brigades mourned its fighters, Ahmed Abu Hasira and Osamah Janina, and said they died after a blessed life full of struggle and sacrifices, asking Allah Almighty to accept them as martyrs, bestow His mercy upon them and make His Paradise their eternal dwelling.” 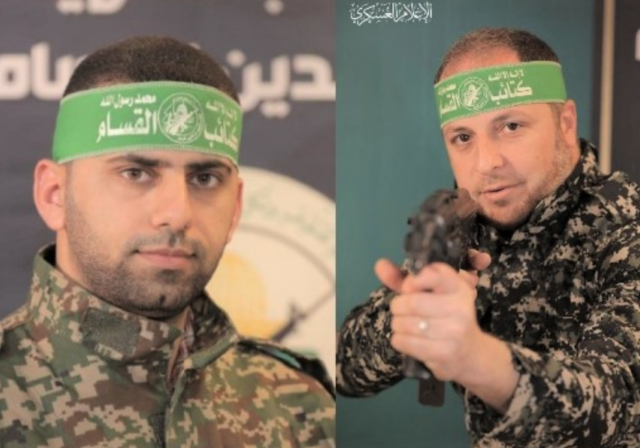 Don’t ya just *hate* when this happens?

According to the ‘Palestine Information Center‘ two Hamas ‘resistance fighters’ were killed when dismantling unexploded Israeli ordnance from the recent fighting:

Interior ministry spokesman Iyad al-Buzom said that two Palestinian resistance fighters were killed on Wednesday when an explosion occurred inside a military site in the central Gaza Strip.

In a press release, Buzom explained that blast happened during the dismantling of Israeli unexploded ordnance.

For its part, al-Qassam Brigades, the armed wing of Hamas, said that two of its fighters died as they were working on dismantling a bomb remnant from the last Israeli aggression against Gaza.

The Brigades mourned its fighters, Ahmed Abu Hasira and Osamah Janina, and said they died after a blessed life full of struggle and sacrifices, asking Allah Almighty to accept them as martyrs, bestow His mercy upon them and make His Paradise their eternal dwelling.

Israeli media identify them as military engineers working on the explosives at a Hamas military base:

Two people were killed after trying to defuse an unexploded IDF ordnance at a military base in Gaza, Israeli media reported.

Ynet reports that the two killed were engineering members of Hamas’ military wing, who attempted to defuse the armament within the confines of the Hamas base.

They almost certainly were trying to salvage the explosive for future use, as common Hamas practice as the L.A. Times reported recently: 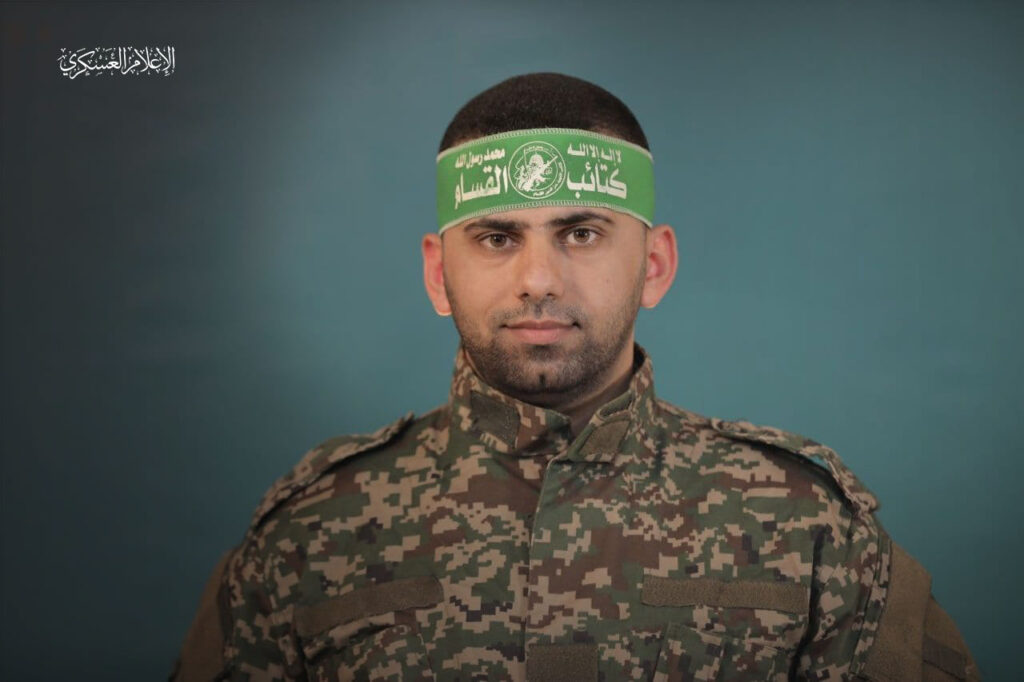 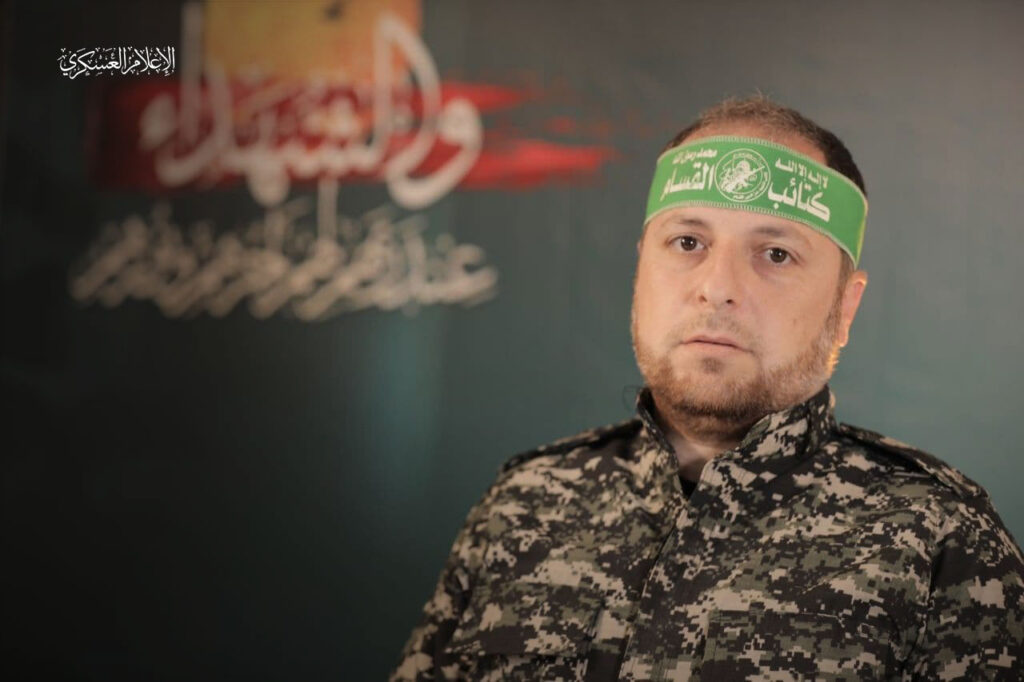 The funerals were well-attended: 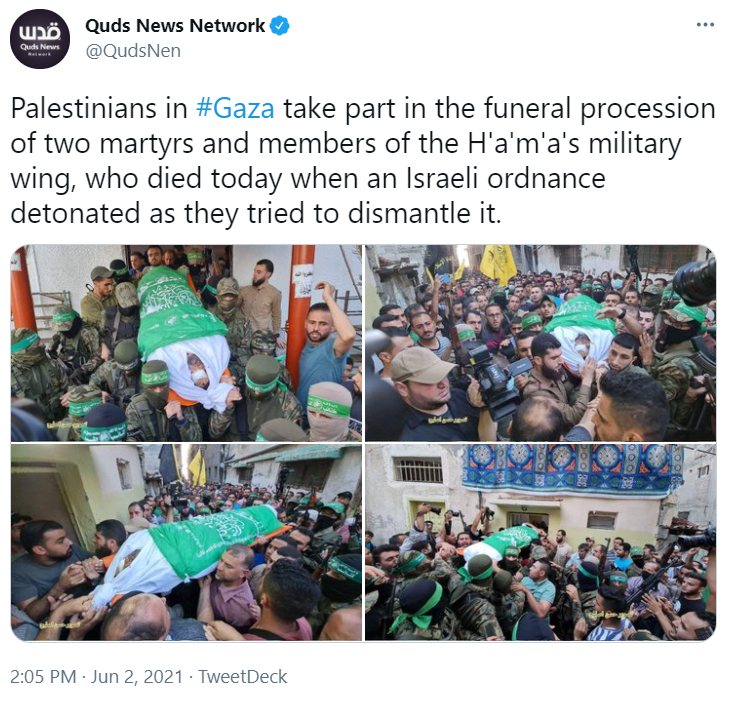 They join many of their compatriots who have died or been injured in Palestinian Work Accidents:

Do the green headbands read “This end up”?

Another form of IQ test. They are not very bright, average being about 85.

One says, “This space for rent.” The other says, “I’m with stupid.”

There is no direct Arabic translation for Banzai! so they have to mansplain it.

Piss be upon him.

“How many time do we tell you, no hashish close to the bo–!”

There’s not enough hashish to walk that off.

Were there parting gifts?

Were their parts donated?

The results from these operations are measured in parts per million.

pigeons and rats, they love terrorists… One bomb can feed 50 rats or 205 pigeons….or two fat hogs. Eat up boys, there’s more where that came from.

The bomb took a horrible toll, those virgins are safe.

Obviously, there is a certain value to designing a small percentage of your artillery to explode on tampering instead of on impact.

Are you sure they were not hospital orderlies or ambulance drivers?

THAT would be even better. Kill one ambulance driver or one orderly and they’ll need replaced it Hamas wants to treat their wounded. My thoughts are leave the wounded alone, they’re tired and need to take a nice nap.

Couldn’t have happened to a nicer pair of assholes.

The bomb took each pair and everyting in the vincinity of their A-hole.

talk about a garden weeding itself….

My husband snickered when I read him the post title.

It’s a failure of Israeli hardware. You don’t want to leave unexploded bombs around because they won’t take out the intended target probably.

Defusing the stuff is generally considered a noble calling.

Dismantling for repurposing or to clear the site for more military action…. how noble. At a military site…. not in civilian areas.

Noble? What’s really noble is killing the wild dogs slaughtering your flock, how you kill them is your business, but they need to either be killed or so damaged that they cannot slaughter anyone’s sheep again.

Time delayed fuse? It seems their time had run out.

One thing I will concede about this. These guys are fully committed to the whole spectrum of being a martyr. They don’t just pay lip service to the idea or make false claims.

As opposed to some jackleg in the US complaining that so and so person or organization or whatever was mean to them and conflating that with the actual hard part, carry through of becoming a martyr.

Allah willed it to be so or it would not have happened.

US Army Ordnance doctrine is: “blow it in place”.

That’s what they did.

The press insists on calling it ‘disarming a bomb’ instead of the more correct phrase, ‘attempting to harvest an unexploded bomb in order to use it against Israeli civilians’ The self-destruct saved innocent lives.

They blowed up real good.

The two men were identified as engineering members of Hamas.

I love warm fuzzy, feel good, human interest stories. They give me hope.

I’ll bet these two nitwitts were smiling as they looked into the lens of the go pro camera the IDF attached to the booby trap.

To use the Jeff Dunham/Ackmed, the Dead Terrorist line, “Premature Detonation.”

Damn, just can’t get any good help these days.