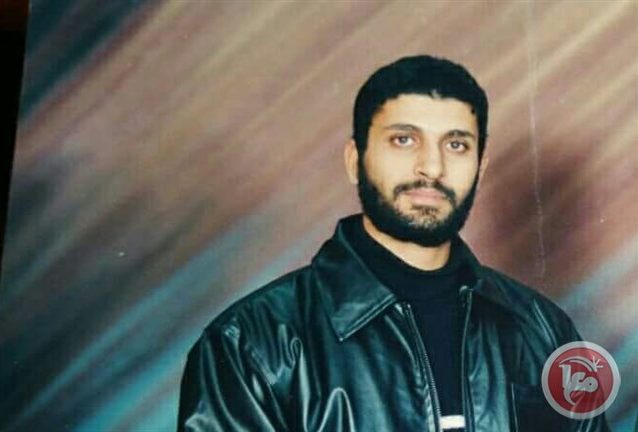 Muhammad Walid al-Quqa, the explosives chief of Hamas, reportedly blew himself up in what commonly is referred to as a “work accident.”

A Hamas fighter succumbed on Sunday to wounds he sustained a day earlier in an “accidental explosion” in the northern Gaza Strip, the Ministry of Health said.

The Izz al-Din al-Qassam Brigades, the military wing of Hamas, said in a statement that al-Quqa was killed during “preparations” without giving details.

However, the statement went on to add that al-Quqa had been involved in “jihadist activities, including manufacturing and assembling explosives.”

The Times of Israel added:

According to Israel’s Channel 2 news, Quqa was the head of Hamas’s explosives unit and the Qassam Brigades said he had been involved in ” including manufacturing and assembling explosives.”

The Palestinian website al-Resalah, which is affiliated with Hamas, said the explosion that killed Quqa occurred in the Sudaniye area in northern Gaza.

The report quoted medical sources who said the Hamas commander had been brought to the hospital with his arms and legs blown off. 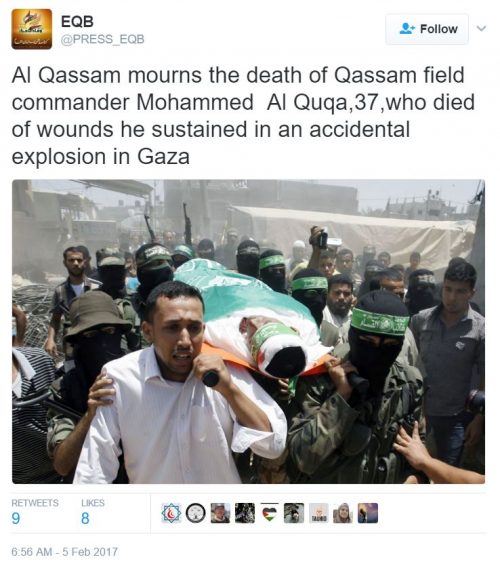 Is it bad that I laughed? May more of his ilk suffer the same fate.

And they say God has no sense of humor.

gods of the copybook headings – little boys what plays with matches gonna get burned.

Too bad he didn’t take that rino rat McConnell with him:

Maybe McConnell will going with Obama to attend the funeral.

Isn’t that Obama in the picture?

How terrible. I’m sorry he died. We could have renamed him Matt.

He should have survived. That way he would essentially be out of action, as would the 2 or 3 people required to care for him.

with the Israeli court system being sooooo lib-rule, he would have won.

US/EU/UN aid funds will probably be funneled to reward his family.

I am certainly glad he “tested” the bomb to see that it worked. Could we start the eulogy with “Dearly de-parted”…

Every virgin will get precisely 42 grams of the dearly de-parted bomber. Sadly, the bomb was positioned at waist height, which means all they’ll get is fingers & toes.

The virgins are all goats. Billy goats.

As has been noted in the past it says Virgins will be female.

Correction, “it never says the virgins will be female.”!

Any update on that edit button, lol.

I say we should set up some practice ranges for suicide bombers and just not tell them the explosives are fake.

I hope the surviving family and OSHA file a suit against Hamas for unsafe workplace conditions.

Workplace accident, How many virgins does he get? Couldn’t happen to a better savage!

You don’t get virgins for screwing up; you get Virgils…

I am sure Pres. Trump will be blamed for this or maybe even Milo. No, maybe Kelly Ann Conway. Well, it could be Steve…..you get the picture.

I just hope his death was painful.

It’s so rare to see news that brings both Angels and Demons great joy.

And the BDS/SJW crowd will blame his death on Israel for forcing him into such a dangerous pursuit.

“Now I’m only gonna go this once,”

Bombs can be dangerous.

I’ll bet he doesn’t do that again! Bwaaa-haaa! Now if we can only get the rest to F-up like that…

Another instance of Palestinian-assisted suicide.

Awwwwwww – ain’t that just too bad.

He was kinda cute, I suppose, but sanpaku will get you every time.

Professor, I was having a really rough day until I saw your headlines. Thanks for the great news! Now if only another 10,000 of these killers would stumble into a minefield things would calm down a little.

That’s too bad. I mean, that nobody was there right afterwards to say “But I wanted a Bud Light.” Well, I am assuming.

Hey that reminds me I should watch Danger UXB again. Was too young to appreciate it when it originally came out on Masterpiece Theater.

Red is positive, black is negative, and negative is . . . BOOM!

Looks like he failed bomb making 101. Perhaps his incompetence will be carried forward to the next would be bomber.

That’s what I call a happy accident.

Note to replacement….if one of the little wires come out of the blasting cap, just reinsert it and crimp it in place with your teeth.

Is it too late to send what’s left of him to Yankee Stadium? I hear they need a new second base.

The true, original meaning of hoist by his own petard. [/Shakespeare]

” . . . the Hamas commander had been brought to the hospital with his arms and legs blown off.”

So, what can we learn from this?

Kevlar vests do work for what they cover.

So many scumbags in one funeral procession and no cluster bombs in sight. Wasted opportunity.

for Heaven’s sake I hope he was wearing a cup.