“I’m Not a Biologist” Week at Legal Insurrection

“I’m Not a Biologist” Week at Legal Insurrection

All the news you may have missed 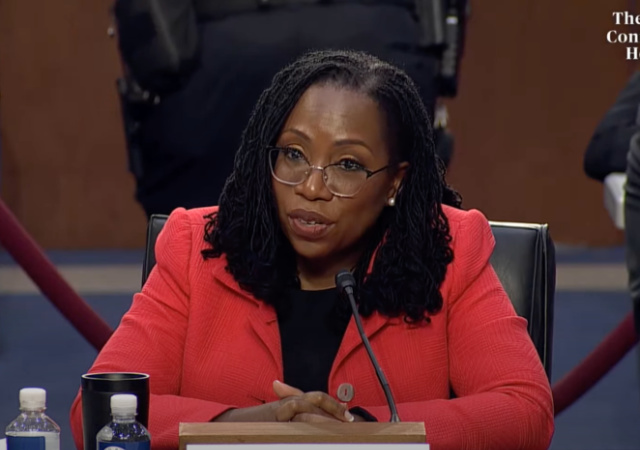 So Ketanji Brown Jackson doesn’t know how to define “woman” because she’s “not a biologist.” Does she consider herself a woman?  And if so, based on what?

Who’s voting how on KBJ confirmation.

Russia’s invasion of Ukraine rages on.

The Army apparently has special knowledge of what a woman is. Perhaps they can send KBJ a clue.

This could get interesting.

Why on earth is mandatory masking still a thing? It’s certainly not based on science.

What else did the CDC get wrong?

Treating the symptom, not the problem.

“I’m not a biologist”

Looks like she’s not much of a jurist either. This Affirmative Action troll is in over her head. Or perhaps over it’s head?

“This Affirmative Action troll is in over her head….”

You’re not a biologist, either! Or a Measurement Expert! Or a Social Scientist!

Identity politics finds the bottom of the barrel, finally

If a judge who is being considered for a SCOTUS position can’t define what a “woman” is because she’s not a biologist, then why are we even considering letting children choose their gender and then giving them puberty blockers? Surely, they can’t know either….

Just literally finished Race Marxism by James Lindsay, putting this woman on the court will be putting a Critical Race Theorist on the bench for the next 40 years. Every decision will be how Race plays into the case and ruled with social justice accordingly.

Her dodge was just hiding her views, nothing more. Her other views are e more frightening I greatly suspect.

“I’m not a biologist”

The biggest SCOTUS candidate “boof” of all time.

I’m not a proctologist, but I can recognize an asshole. This babe is nothing more than a lying, evasive asshole.

Wait till she’s a Supreme Court justice. If you think Obama and Biden have caused damage to our nation, wait till this lazy, indoctrinated dumbbell goes into action.

What does the future hold based on the ‘I am not a biologist’ and thus can’t be expected to accurately determine what constitutes a woman?

Title 9 seems to be in jeopardy as does the entire trans movement. After all if a definitive answer of what gender requires the presence of a biologist, as per a nominee to SCOTUS, then all current policies and accommodations based on a lesser level of scrutiny are null. Particularly those claims made by the individual.

I served in aircraft carriers before women were regularly stationed in them. So long ago that to send a message we had to hand deliver basically ticker tapes to the comms center.

So I leave the Intel spaces to send a message and the moment I leave the hatch I realize, “There’s a woman on board.” I could smell her. Just out of sheer curiosity I follow my nose. I twisted and turned through the ships’ passageways until I end up in the cryptology spaces. There she is.

First, I have to state so there is no misunderstanding that I have no use for this woman whatsoever and do not feel she is anywhere even remotely qualified for a position on SCOTUS- so this is in no way a “defense” of her in any way.

This is for the benefit to posters who have never done testimony in court as a SME because her answer is typical of numerous trials and hearings I have been involved with – its just that the media has turned it into a farce like they do most things.

Her answer is pretty much what one would ( and should) expect from someone answering from a legal perspective. I myself have been given guidance on answering similarly for the same reason. (by lawyers I was brought on to testify for)

The question “How do you define a woman” ( and you could take the term woman out and insert just about anything) is often used as a “gotcha’ type question used to attack a SME ( or sometimes a layman) in the qualification department trying to get them to testify beyond their “expertise” and hopefully impeach them.

For example: A weather report from a newspaper is usually considered “hearsay” unless a meteorologist (SME) authenticates it.

She was asked basically a question not as a “lay person” but as a judge in an interview which has an answer clearly based in the sciences.

What she did was demur the question and stated she was not an SME qualified to answer that question as phrased. ( she probably should have asked for it to be rephrased).

Its one of those “no win” type scenarios. ( she should have asked for it to be rephrased or otherwise qualified)

I see it for what it is because I have been on the receiving end of that type of attack myself (its very common) in testimony.