“As of today, there are about 100,000 people in the city. In inhumane conditions. In a complete blockade. No food, no water, no medicine. Under constant shelling, under constant bombing.” 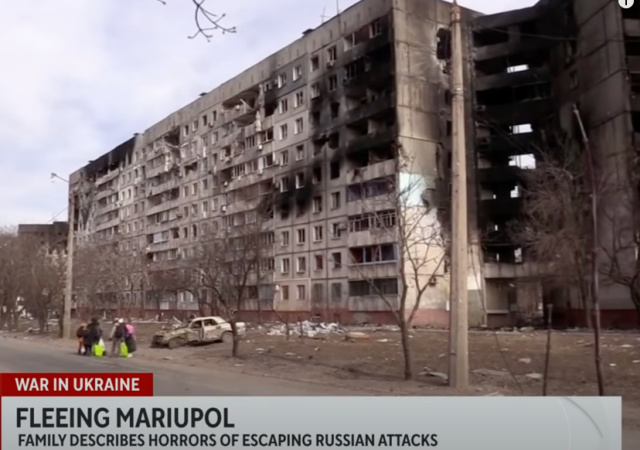 Thank you, everyone, who reads these posts. We cannot allow this war to go behind the curtain, literally and figuratively. The media has ignored it for eight years (I’m a broken record on that on purpose) and I feel it slipping away again.

Anyway, Russia still surrounds Mariupol. The Russians have destroyed most of the town but the Ukrainians will not give in and surrender. Biden’s administration warns the Russians could launch a cyberattack on Americans. Biden will also announce more sanctions on Russia during his Europe trip.

Poland expelled Russian diplomats. Now Russia gave the U.S. Embassy a list of diplomats it wants out of the country:

Russian state media says the foreign ministry has given the US embassy a list of American diplomats it is expelling.

The move comes after 12 Russian diplomats were expelled from its mission to the United Nations in New York earlier this month.

The Russian foreign ministry said that the Americans were “firmly told that any hostile actions of the United States against Russia will receive a decisive and adequate response”, Interfax reported.

Support in Finland to join NATO has doubled since just one year ago, with a majority now voicing support for the first time since polling started in 1984.

Finnish Business and Policy Forum EVA has collected data twice each year for almost 40 years to track attitudes and values, which includes politics, economics, foreign relations, the environment and well-being. Chief among those interests remains whether Finland should join NATO.

Results from Autumn 2021 found only 26% of the population supported joining NATO, but following Russia’s invasion of Ukraine that number has leapt to 60% support for NATO membership. The same percentage of Finns support taking a decision this year on the matter.

What the heck, Biden:

Departing the White House Wednesday morning, Biden was asked what he will say to European partners.

“I’m going to say it all to their face,” Biden told reporters. “I’ll be happy to talk to you guys when I get back.”

But then Zelenskyy did the same thing. Only he said it to France:

“We need to think now of how we want to live after the war. We need guarantees,” Zelenskyy said. “And for these guarantees to be stable and to make sure war like this – the one were are having right now – will never happen again. We need a new security system in which maybe France will be the leader.”

“They burn food supplies and medical supplies as well as universities. They do not take into account the concepts of war crimes,” he said. “They only bring terror to the Ukrainians.”

This is what happens when you rely on Russia for energy:

President Vladimir Putin said on Wednesday that Russia will only accept payment for gas in roubles from “unfriendly countries”, which includes all EU members, following the imposition of Western sanctions on Moscow.

“I have decided to implement a set of measures to transfer payment for our gas supplies to unfriendly countries into Russian roubles,” Putin said during a televised government meeting.

He added that Russia will continue supplying the volume of gas outlined in its contracts and will require the country’s central bank to implement the new payment system within a week.

“It is clear that delivering our goods to the European Union, the United States and receiving dollars, euros, other currencies no longer makes sense to us,” Putin said.

Ukraine said the move signalled a “key economic battle” that the West “must collectively win”.

Poland has identified 45 Russian intelligence officers using diplomatic status as cover to stay in the country and authorities are seeking to expel them, officials said Wednesday.

Poland’s Internal Security Agency said it was asking the Foreign Ministry to urgently expel the Russians, who were described as a danger to Poland’s security.

“Due to Russia’s policy towards the Republic of Poland and its allies, as well as taking into account Russian aggression against Ukraine, the head of the agency requests the expulsion of the indicated persons from the territory of the Republic of Poland,” said Stanislaw Zaryn, the state security spokesman.

“As of today, there are about 100,000 people in the city. In inhumane conditions. In a complete blockade. No food, no water, no medicine. Under constant shelling, under constant bombing,” he said in his nightly Facebook address.

He added that efforts to rescue civilians there through humanitarian corridors have been interrupted by Russian “shelling or deliberate terror”.

One humanitarian column was captured by Russia on Tuesday, he said, adding that Ukrainian government workers and their bus driver had been taken prisoner.

“Despite all the difficulties,” he says, “7,026 Mariupol residents were rescued” from the city on Tuesday.

Zelensky added that Ukraine has received over 100,000 tonnes in humanitarian aid in the past two weeks.

He said new Western sanctions would be unveiled against Russia this week when world leaders attend a Nato conference in Brussels.

Zelensky also said he had spoken to Pope Francis on Tuesday, and invited him to visit Ukraine.

“I believe that we will be able to organise this important visit, which will unequivocally support each of us, each of the Ukrainians,” he said.

I have been reading reports that the Ukrainians have surrounded a sizable pocket of Russian troops NW of Kiev.

Who knows if that’s really true or not, but one can hope.

Be prepared in case the Russians take down the debit/credit card system and you cannot use your card to buy groceries or gas.

CRAP, I’m MORE worried that the turnip in the White House might do that!! Don’t put ANYTHING past these democrats to shut down the discussion of The First Crackhead’s laptopS!!! PLURAL LAPTOPS!!

Fortunately, in June of 2021, President Biden presented President Putin with a list of 16 infrastructure entities that are “off-limits” cyber-targets.

So, relax everyone! It’s all good!

In return, Putin gave Biden a list.
He didn’t open it until today.
All the targets were in Ukraine.

Probably just a listing of all of The First Crackhead’s sources for crack, hoes, and places he MIGHT have dropped off a LAPTOP!

I remember the commercial:

Today it would be:

What ever the truth is, one thing for sure. The Russians don’t care about casualties…theirs, civilians, Uke army, nobody. Eastern mind sets be it Russian, Muslim, or Chinese are this way. They don’t care. Caring is for the West to be burdened with. East is East and West is West etc.

Mr. Whitewall is correct about eastern societies not caring about casualties. Putin doesn’t care a gnat’s eyelash about the individual soldiers. This is the way Russia has always done it.
The Tsar Nicholas II mowed down hundreds of people who were just trying to get free food.
No civilians were allowed to leave Stalingrad or even cross the river.
They threw a hundred thousand or more soldiers and thousands of tanks at the Germans in the battle(s) of Kursk. Even though the Germans were ultimately defeated, they obliterated the Russian tanks and soldiers about 50 – 1.
Stalin didn’t care, Zhukovsky didn’t care, Breshnev didn’t care, Putin doesn’t care. They don’t care how many of their own people are killed or wounded or taken prisoner. Remember, Stalin sent all Russian WWII prisoners returned from Germany right on into the gulags.
Biden should hint that, as Sun Tsu said, Putin has a golden bridge on which to withdraw.” He won’t be seen as a loser or weak. Biden is telling the world that the end of this war sees the end of Putin. That’s not going to happen.

Mariupol aside the Russians have been somewhat restrained in the destruction. Several factors at play there, bad blood from years of constant low intensity conflict, presence of no kidding NAZI in the Ukrainian Azov units. Frankly Russia would want to capture as much of the Donbas and a land bridge to Crimea with it’s infrastructure intact. They plan on keeping it long term.

It’s true that eastern cultures are less concerned with individual casualties because they prioritize the group v the individual. While Russia is more Asian in outlook than Western Europe they are not Asian. They also have a keen understanding of propaganda. They don’t want lots of photos/video of dead civilians because they realize it will galvanize many against them. The absence of large numbers of photos and videos showing dead civilians, other than those curated by the Ukrainian govt is notable.

That doesn’t mean it isn’t occurring or that refugees aren’t fleeing. In Mariupol for instance some reports credit the Azov units for civilian deaths. Given the history, the high stakes and ideology it wouldn’t surprise me if at some level, the reports of Azov units refusing to allow civilians to leave or co locating military targets into civilian areas have some validity. Neither Ukraine nor Russia are wearing a completely white or completely black hat, the facts are far more nuanced than a surface level good v bad. Either way the best we can hope for is a rapid agreement to an armistice to end the killing and destruction.

Not only will buyers of Russian oil, gas, grain, metals, and vodka have to settle in rubles, they will also have the option of settling in BITCOIN, which will be convenient for those who want to make their payments private and unknown to the Obiden Junta. This option was mentioned today by Russia’s Finance Ministry. This is really the biggest news of the year. .Saudi Arabia has already agreed to allow China to pay in Yuan. The petrodollar is dying quickly. It only took th eObiden Junta few months to destroy the petrodollar. Give them a few more and the dollar’s position as the world’s reserve currency will vanish as well. The result will be we can’t finance our 32 Trillion debt abroad and will have to create it entirely by the Fed .Expect 20%-40% inflation and supply shortages like we have never seen in our entire history. Time for Patriots to march on the District of Corruption And hang the entire lot of them before they do more damage.