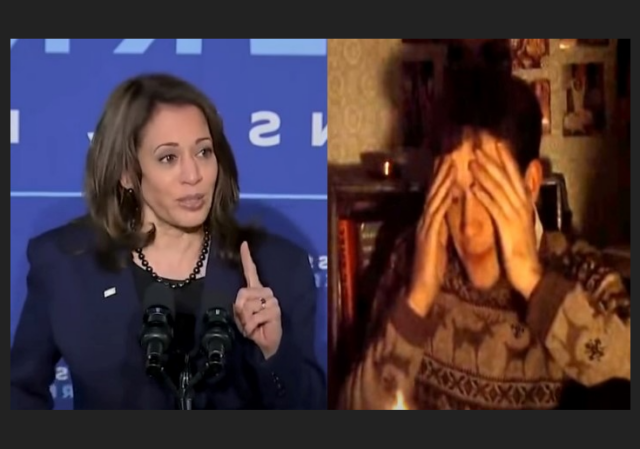 The full video is here, it’s not out of context.

As soon as I saw the clip, I thought of this clip from Animal House:

(RIPS BONG)
Wait a minute. Have you ever considered this? https://t.co/nZvkaJoCoL

Newt Gingrich called her the “dumbest person to ever be elected vice president”.

I think he was being kind. She’s much worse.

Keep in mind, she had to beat out a guy who couldn’t spell potato and a guy who is now a dementia-ridden retarded pedophile for that title.

So, a good match for the dumbest person ever to be installed as President?

Well she’s just the kind to live in the past
The years run too short and the days too fast
The things she leans on are the things that don’t last
Well it’s just now and then her life gets cast into these
Time passages
There’s something back here that you left behind
Oh, time passages
Buy her a ticket on the first train home tonight

We’re all aware of the significance of the passage of time — we’re counting the days until she’s no longer in a position of power.

In California, her ‘bitch’ routine worked to keep enough people at bay from publicly busting her. It also goes to show just how powerful her ‘john’ (Willie Brown) is in California politics, managing to shove – er – elevate her to high positions she was nowhere near qualified to hold, and keep the secret that she is of rather low intelligence and even lower character.

Do you mean to say that a woman who will sleep her way into an office she doesn’t deserve is of low character?

I too think about the significance of the passage of time.

For example, it was less than a mere 7 years of significant passage of time from gay marriage to be legalized to having teachers trying to make children gay in just about every classroom in America.

A mere 3 years for Child Drag Queen Desmond to be dancing for gay men for money in the streets.

At least we’ve conclusively proven that slippery slopes are indeed….slippery.

This fool is next in line for the presidency. Newt Gingrich is right; she’s completely unqualified to be anywhere near the White House.

You can tell she learned a lot from Jack Handey.
Willie Brown says it was totally worth the cost of the lessons.

I too think of the significance of the passage of time. For example, November 6, 2020, regular unleaded was $1.82 … then “81 million ballots” were counted.

Funny, when I saw it this is the first thing that came to MY mind:

Great song. Don’t think you should associate it with this ugliness.

That Animal House reference is very on the nose. She sounded like a sorority ditz who was baked.

I’ve seen idiots do this.

This is somebody that didn’t bring her speech notes or teleprompter and didn’t bother to actually study the speech she was supposed to give, and when she got to the microphone that’s the only phrase she could actually remember so she just kept repeating it.

From everything her rapidly-changing staff have said, she’s the absolute WORST kind of egotistical idiot to work for – arrogantly refuses to do any work to prepare for these appearances, and then blames her staff when she makes an ass of herself over and over again.

I too remember my first “Table Topics” at toastmasters.

I give her props for not using filler words and having the tone of a homosapien. If you’ve been there, you know. Bonus points for not cackling.

“there is such great significance to the passage of time”

Well, I happen to think the statement is profound and worth repeating. In the passage of an unimaginably short period of time, Brandon has gone far in ruining the USA (not to speak of Afghanistan and Ukraine). It is the VP’s job to hold up Brandon’s accomplishments for broad acclaim. /s

Honestly, it sounds like the whore hit her head too many times on the underside of Willie Brown’s desk.

At first glance I thought it said “Kamala Harris has deep THROAT’.

She is the Stuart Smalley of DC. https://tinyurl.com/nfbxytrf

“Why do they call them fingers? I’ve never seen them fing!”

“The full video is here, it’s not out of context.”
I suspect the more context you added, the more cringeworthy it would get.
Four times is enough.

Agree. I’m busy doing anything else.

Is that deep thought or deep throat.

And I thought Dumb and Dumber were just an act…

Harris has never had a deep thought….ever

It seems the Toe of the Camel is intellectually getting into AOC territory now.

Whenever I see this challenged woman speak, I think of Sarah Palin. Palin, IMO, was nothing close to being qualified to become POTUS–the VP being one heartbeat away from being that. Palin is by no means unique in this regard, the current occupant of that office being Exhibit A.

Palin gave one stem winder of a speech at a GOP convention. The teleprompter wasn’t working at the start–you would never have known it. Later, a camera caught her (a different speech) with notes on her palm–a technique I have used.

Obama, famously, couldn’t say “good morning” without the teleprompter. Biden can’t even read the teleprompter and they give him the hook when he goes off script. Who knows what Harris’s challenge is? But, somehow Obama was a towering intellect and a fabulous orator and Palin was a dolt.

A little confused. You do know that “stem-winder” is a bad thing, right? From, “How long has this been? Has my watch stopped? Maybe I forget to wind it.”

Perhaps. Remember her rule as a DA: she can smoke it, but jail for you if you do.

OMG. I thought of the same exact Animal House scene when I heard her say that.

Great minds and all.