China has been “arming them with anti-ship and anti-aircraft missile systems, laser and jamming equipment, and fighter jets.” 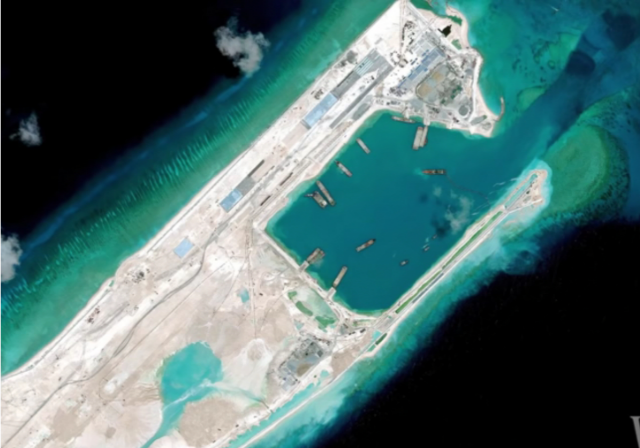 While China’s ally Russia is waging a full-fledged war in Ukraine, Beijing is busy militarizing its illegally encroached artificial islands in the South China Sea, a senior U.S. admiral disclosed.

These militarized islands are equipped with airfields fit for nuclear-capable bombers. In any future military conflict in Asian Pacific, especially a possible Chinese invasion of Taiwan, these islands will play a critical military role.

China has fully militarized at least three of several islands it built in the disputed South China Sea, arming them with anti-ship and anti-aircraft missile systems, laser and jamming equipment, and fighter jets in an increasingly aggressive move that threatens all nations operating nearby, a top U.S. military commander said Sunday.

U.S. Indo-Pacific commander Adm. John C. Aquilino said the hostile actions were in stark contrast to Chinese President Xi Jinping’s past assurances that Beijing would not transform the artificial islands in contested waters into military bases. The efforts were part of China’s flexing its military muscle, he said.

“I think over the past 20 years we’ve witnessed the largest military buildup since World War II by the PRC,” Aquilino told The Associated Press in an interview, using the initials of China’s formal name. “They have advanced all their capabilities and that buildup of weaponization is destabilizing to the region.”

China’s massive island-building project, which first came to light under President Barack Obama’s watch, has created 3200 acres of ‘new land’ and extended the Chinese military reach in the region, estimates show. “Using the islands, China has the potential to project military power all the way down to northern Australia or into the Indian Ocean,” the Australian TV channel Nine News reported last year.

China has declared these artificial islands as a legitimate part of its territory by setting up fictitious local governments. These illegal islands infringe on the sovereignty of many of China’s maritime neighbors, including the Philippines, Vietnam, Malaysia, and Taiwan.

These weaponized manufactured islands, also dubbed China’s ‘Great Wall of Sand,’ is part of Beijing’s grand maritime strategy. China’s People Liberation Army (PLA), which in 2017 took control of the port of Djibouti in the Horn of Africa, eyes other bases across the globe. The PLA is building a naval port in Gwadar, Pakistan, giving it access to the Arabian Sea.

Tensions Brewing Between Russia and Japan

With the Russian military offensive against Ukraine in full swing, President Vladimir Putin is heating a new territorial dispute in the east.

Russia “withdrew from peace treaty talks with Tokyo and froze joint economic projects related to the disputed Kuril Islands because of sanctions imposed by” Japan in response to its invasion of Ukraine, The South China Morning Post reported Tuesday. Russia and Japan have not formally ended their World War II hostilities over the seizure of Kuril islands by the Soviet Union in the 1940s.

“The Russian Foreign Ministry on Monday said it will withdraw from negotiations with Japan for a peace treaty to formally end World War II hostilities in response to sanctions over the war in Ukraine,” the Japanese business daily Nikkei reported Monday.

China, Russia’s de facto military ally, also has a territorial dispute with Japan over the control of Senkaku islands located in the East China Sea. Russia has recently emerged as China’s junior military partner on the world stage. In November 2021, three months ahead of the Russian invasion of Ukraine, Beijing, and Moscow sealed a “road map” for closer military cooperation by 2026.

I think that destruction of one or more of those islands would make China rethink their position. I would be best if it was a small nuke with an unknown detonation signature, or maybe a Russian signature.

I thought we all learned about the risk of appeasement.

There’s no one left in authority who lived it. As to those who are in power now, Ambition has no care for History.

Quit sweating the Chinese. Right now, the Chinese cannot even feed themselves. They are projecting the worst wheat harvest in living memory. And, the Swine Ebola has devastated their pig crop. Plus, their coastal cities already import 50% of all their calories.

In an effort to rebuild their swine herd, they have hoovered up all the global excess food supplies like old soybeans from Argentina and broken rice from India to Croissant grade flour from France. They cleaned everybody out. And now, the Swine Ebola has returned and they need to cull the new herd as well.

The Chinese face a famine (part of the upcoming global famine) that could completely destabilize the country.

Plus, if you want to destroy China, station two destroyers in the straits by Singapore and block Chinese oil tankers. 3 months later all the cars and trucks will stop running. 3 months after that all the lights in China go out.

With regards to you last paragraph, Russia built a direct oil pipeline to China.

Easy to take it out.

And, that pipeline flows from a western Siberia field that only stays open with the technical help of the international oil companies that just left the country. Meanwhile the only two ports the Russians have pipelines to are too shallow for supertankers. Shuttle tankers would burn a third of the oil delivering it to China.

Hang on? Stop worrying about China because the country is about to collapse?

That’s exactly when you have to start worrying! Happy nations don’t start wars.

African Swine Fever is no laughing matter for most of the world, It’s a real pandemic (animal only) that has caused enormous consequences, and the US APHIS has really proved its worth in keeping it out of our country. (Thankfully, some government agencies are competent)

I’m shocked I tell you! Shocked!

I flew on recce missions against some of these islands back in the 80s. They have really come up in the world. The PRC was just starting to seriously put markers down in the SCS. The money picture I remember was a Chinese Sailor standing on the end of a dock looking all confused as to why a US P-3 was circling him. At the other end of the dock was a Tiki hut! That was it. Yup, they’ve come up in the world.

These guys can build entire populated islands out of nothing.
America can’t even keep its bridges standing.
Including pedestrian bridges.
This is a national shame.

The Chinese dramatically overbuilt their cement capacity. In two years they can produce the equivalent of all the cement used by the USA in the last century. So, now they are dumping it into the ocean and making islands.

How are they holding out with that tsunami near Taiwan?

Hey, where’s the story of how China, Russia and just about everyone else in the world has paid-off (and is extorting) our purported president and has him in their pockets?

They had Clinton all wrapped up and in their pockets, but she was too stupid to win a rigged election.

It is amazing what both the Clinton Crime Family & the Biden Syndicate will do for a bit of coin.

Seems to me that those islands are more important to China than Taiwan. If they can defend them during war (I doubt it), they would address a major liability that hurt Japan in WWII and keep China boxed out of easy access to the Pacific Ocean.

Just look at them though. They are artificial islands of sand that are reportedly sinking already. All those juicy targets right out in the open on a mere 3200 acres. Were China to launch their attack on Taiwan, I imagine we could take those islands and all of those valuable assets out very quickly. We might even take them out before China had a chance to use them on Taiwan. I can’t see them being a long-term base of operations for China in a war. China would be struggling just to maintain supply lines to the Taiwan assault forces bogged down in the beaches.

I think China just wants them there near term to intimidate Japan and South Korea. In the longer term. Japan and Australia are already rebuilding their military and I am sure these islands, if they don’t sink or get washed away, are a major consideration. So were they to attack Taiwan, China would already be hard-pressed to project power beyond the South China sea with or without them..

So fit for every kind of bomber?