McConnell did not appreciate Judge Jackson not rejecting the idea of packing SCOTUS. 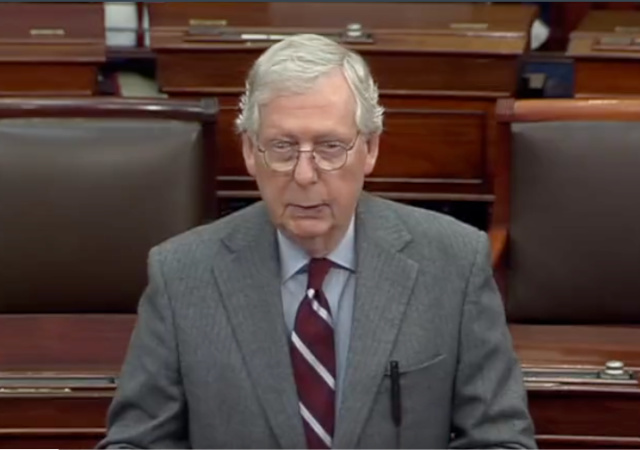 “First, Judge Jackson refuses to reject the fringe position that Democrats should try to pack the Supreme Court. Justice Ginsberg and Justice Breyer had no problem denouncing this unpopular view and defending their institution.”

.@LeaderMcConnell: "I went into the Senate's process with an open mind, but after studying the nominee's record and watching her performance this week, I cannot and will not support Judge Jackson for a lifetime appointment to the Supreme Court. pic.twitter.com/DwrAm7FDwv

Mitch won’t vote for her, but a few of his GOPe lackeys will with his blessing. Hopefully, the turtle found time to object to Jackson’s pedo enabling.

Romney says he will support her with both hands.

Zing! He beat Carlos Danger to it!

Romney, Collins, and that Russian woman… Now I remember. Murkowski.

And when 50 GOP senators vote against her will your faith be shaken or will it just be failure theatre. And if it is 50+ Manchin will that do anything to shake your faith?

It would be a stunning moment to the whole country if she was defeated.

She’s not going to be defeated. Even if they go 50-50 and Kamala is the tie-breaker judge Jackson will become Justice Jackson. She will get some GOP dirt to vote for her.

Sure, Danny. When that happens, I’ll catch a ride on a flying pig to the moon the Mitch hangs for you.

I hope Manchin and Semina(Sp) vote against her

If they do, it will only be because enough RINO trash has crossed the aisle for them to get permission to vote against her. Which is supremely likely given the track records of Pierre Delecto, Grahamnesty, and Murkowski.

They WILL NOT be the deciding votes against her.

If the r on the Judiciary committee vote against referring the nomination to the Senate then maybe there’s a solid shot at blocking this. The Senate can still get a vote by Schumer acting but it gets complicated. If the nomination comes out of committee it’s as good as passed.

Nope. If there’s a tie in the committee it automatically goes to the floor. That is the rule the senate adopted, since the numbers are tied.

My understanding is that it is not automatic in case of a tie; the Majority Leader can choose to bring the vote to the floor despite the nomination not passing out of the committee in regular order. Then there are procedural votes prior to a final vote for confirmation.

(1) If a committee has not reported out a measure or matter because of a tie vote, then—

(A) the Chairman of the committee shall transmit a notice of a tie vote to the Secretary of the Senate and such notice shall be printed in the Record; and

(B) after such notice of a tie vote has been transmitted, the Majority Leader or the Minority Leader may, only after consultation with the Chairman and Ranking Member of the committee, make a motion to discharge such measure or matter, and time for debate on such motion shall be limited to 4 hours, to be equally divided between the two Leaders or their designees, with no other motions, points of order, or amendments in order: Provided, That following the use or yielding back of time, the Senate vote on the motion to discharge, without any intervening action, motion, or debate, and if agreed to, the measure or matter be placed immediately on the appropriate Calendar.

So yes, Schumer would have to make a motion to bring the nomination to the floor, but the most the Republicans can do is demand four hours of debate. Once those are over, it comes to the floor automatically. No procedural motions allowed.

Thanks. Agreed, outside a well timed filibuster before the Majority leader is recognized to bring the motion….not very likely. The nominee will be confirmed.

Tricks and procedure only go so far. This is yet another example where winning one of the two GA Senate races would make a difference.

CommoChief, there is no more filibuster for SCOTUS confirmations.

It wouldn’t be a filibuster during the motion or the vote. This would be a talking filibuster prior to any Senator bringing the nomination to the floor.

Lets say the nomination is scheduled to go to the floor on Thursday. On Wed a Senator is recognized to speak and then refuses to yield the floor except to another Senator who is also willing to filibuster. This sort of Mr Smith filibuster can still occur as long as it is in advance of the motion to proceed.

Her confirmation is by itself an obvious court packing play. There is nothing that actually requires the person she is supposedly replacing to step down. Then when he actually does step down, which may be years from now, it will be demanded that he be replaced rather than allow the seat to go away as originally promised.

Don’t forget the long-term point of her appointment, besides her flawed jurisprudence: to make that seat a black woman’s seat, permanently. The progressive ratchet is always one-way.

Blacks account for 12.4% of the population. 2 out of 9 seats is 22.2%. Perhaps the extra 10% is reparations for past shortfalls or Clarence Thomas gets counted as mostly white?

Maybe it’s an application of the 3/5ths rule, this time to their advantage,

What on earth are you talking about? If Breyer changes his mind and decides to stay on the court then there will be no vacancy for Jackson to be appointed to.

This is what’s got McConnell’s knickers in a knot? If I were nominated for the supreme court and asked that question I would refuse to answer too. I’d say that as a judge and potential justice it’s not my place to tell Congress what I think it should do. As a judge I’m supposed to rule on the law as it actually is, not as I think it ought to be, so it would be wrong for me to express an opinion on what laws Congress ought to pass.

I’d also point out that suppose I said I was against Congress expanding the court, and Congress decided to do so anyway; I’d have to work with the new justices after having publicly stated that they shouldn’t be on the court, and that would be awkward.

Is it me or is this a bit cart before the horse? Breyer has yet to retire, only said he would. There is no current vacancy….and the optics look like a push from behind.

There’s no current vacancy, but there’s one coming up. There’s no reason the senate has to wait for the vacancy to materialize before making up its mind whether to consent to the president making the appointment he proposes, when and if that vacancy happens. Of course if Breyer changes his mind and doesn’t resign then this will all have been for nothing.

Ronna McDaniel Is Trying To Save Her Career After Failing To Do The Right Thing With The 2020 Election.” – GOP Chairwoman Attempts To Take Credit For Scott Presler’s Gas Pump Voter Registration Drive
https://www.thegatewaypundit.com/2022/03/ronna-mcdaniel-trying-save-career-failing-right-thing-2020-election-gop-chairwoman-attempts-take-credit-scott-preslers-gas-pump-voter-registration-dr/

Question – how binding are the federal sentencing guidelines? If they are only suggestions – fine. If there is weight behind them, and violating them is an issue – KBJ has already shown guiding structure is to be ignored. Imagine just how far she will stray from the Constitution.

Regardless of the above…her answers and lack of answers should disqualify her.

Federal guidelines are non-binding so the answer to your question is “zero percent”. However they are highly influential on most judges and have created a much more uniform system of sentencing than would be even remotely possible without them (we have over 5o different sets of laws).

The supreme court decided almost 20 years ago that mandatory sentencing guidelines are unconstitutional, so since then they’ve been advisory only.

Danny and Milhouse – thank you

She is the Will Thomas of judges.

McConnell won’t support her, which means nothing as long as you have liberal Republicans and the most conservative Democrat who are going to vote for her.