The North Korean missile “is thought to be the world’s largest road-mobile liquid propellant ICBM.” 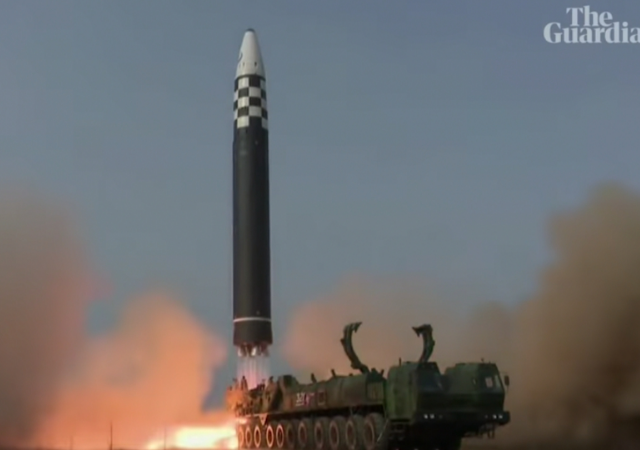 With the U.S. and Western powers pre-occupied with Russia’s invasion of Ukraine, North Korea is flexing its muscles in the Pacific.

The Communist dictatorship reportedly tested its longest-range intercontinental ballistic missile (ICBM) ever on Thursday. The missile, which flew around 680 miles before falling in the Sea of Japan, has a maximum range of over 3,700 mile and is capable of striking the U.S. mainland, news reports suggest.

The missile launch indicates heightened military build up by North Korea since President Joe Biden took office. In January 2022, the Communist dictatorship reportedly tested a series of hypersonic missiles that were apparently capable of evading detection by most U.S. and Western air defense systems.

North Korea said on Friday its launch of a big new intercontinental ballistic missile this week was designed to demonstrate the might of its nuclear force and deter any U.S. military moves.

The United States responded by saying it would push the U.N. Security Council to “update and strengthen” sanctions on North Korea over its “increasingly dangerous provocations,” a move Pyongyang’s allies China and Russia are likely to oppose.

Thursday’s launch was the first full ICBM test by nuclear-armed North Korea since 2017. Flight data indicated the missile flew higher and for a longer period than any of North Korea’s previous tests before crashing into the sea west of Japan. read more

What North Korea calls the Hwasong-17 would be the largest liquid-fuelled missile ever launched by any country from a road-mobile launcher, analysts say.

The North Korean regime hailed the missile test as a challenge to the United States. Pyongyang is “fully ready to thoroughly check and contain any dangerous military attempts of the US imperialists,” the regime declared. This is the first long-range missile test by the regime since 2017.

The Biden administration reacted to the missile test by urging the United Nations to put more sanctions on North Korea. “At a U.N. Security Council meeting Friday, U.S. Ambassador Linda Thomas-Greenfield said the U.S. would propose a resolution “to update and strengthen” Security Council sanctions. She declined to specify what those new measures might be, The Associated Press reported. China and Russia opposed any such move against North Korea, their geostrategic ally.

Why do we continue to pretend that Russia, China, North Korea, and Iran aren’t enemies of the entire free world?

Is there anyone, anything left that has not yet reached the District of Corruption?

It would be preferable to have the Brits and Canadians come burn it down again… fallout from a Nork Nuke might drift over the salvageable parts of the country.

The cost of freedom is often high… although a little fallout is a simple cost for sterilizing the swamp. That would lead to a real Build Back Better.

Think eastward, ever eastward. Tidewater may have to take one for the team.

“North Korea Claims Successful Test of “Monster Missile” Capable of Reaching Washington, D.C.”
Do they have a GoFundMe?

“In January 2022, the Communist dictatorship reportedly tested a series of hypersonic missiles that were apparently capable of evading detection by most U.S. and Western air defense systems.”

The missile only went 680 miles. The assertion that it could “hit Washington DC” is beyond hyperbole. Let’s see it go 3,700 miles before we get worried.

Nah. Kim’s probably halfway to a lucrative deal for a launch facility in Boston, Chicago, Atlanta, or Camden. Maybe all four.

Hey, if we can get more cringe-worthy Jong-un Top Gun trolls out this mess, I’ll roll those dice.

If they would reach out to Monsanto and genetically modify it so it only affects democrats and rinos….

If they can orbit a satellite, they can reach out and touch anyplace on the planet. They’ve been attempting satellite launches since 1998. 2 of 5 attempts so far successful. Cheers –