Life in California during the new era of raiding and pillaging. 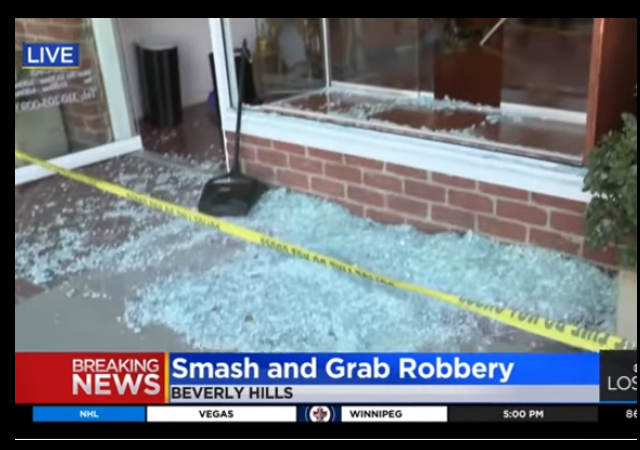 Just a few days ago, smash-and-grab suspects targeted a Beverly Hills jewelry store in broad daylight with sledgehammers, stealing items worth up to $5 million.

“I told my employee, ‘Get on the floor,'” Peter Sedghi, owner of the jewelry store, told the New York Post of the looting that unfolded Tuesday. “As soon as I heard what I thought were gunshots finally stop, I grabbed my gun. First, I made sure my employees were OK. I then went outside, but they were already gone.”

He estimates the suspects stole between $3 and $5 million, and “knew” which high-end items to take.

“We sell high-end jewelry and watches so they took big diamonds, big necklaces, Rolexes, Patek Philippe … they knew exactly what to take,” Sedghi told the New York Post. “Thank God, no one was hurt.”

Given the surge in crime, which includes the slaying of a luxury furniture store employee in another area of Beverly Hills, Los Angeles area residents are beginning to enhance their personal security.

Orders for armored safe rooms in luxury LA homes is skyrocketing due to rising crime rates and a number of high-profile celebrity robberies.

One company told The Hollywood Reporter that demand has increased more than 1,000 percent over the past three months for the pricy home additions, which can cost $1 million or more.

Though crime has risen in all areas, it’s a spate of burglaries and robberies targeting wealthy neighborhoods that has residents concerned.

In February an intruder reportedly broke into Kat Von D’s $15 million Hancock Park residence while she and her son were asleep.

Just a month earlier, actress Lori Loughlin and Mossimo Giannulli said their LA-area house was broken into – while in December TikTok personality Bryce Hall shared a clip of him confronting an intruder who entered his West Hollywood, California, residence.

It turns out that it isn’t just the locals committing crime in this state. California has now become a favorite destination of crime tourists.

Gangs of South American ‘crime tourists’ are being blamed for at least two home burglaries in California this week – as well as similar raids across the country in recent months, including sprees in Indiana, Texas, New York, Virginia, Georgia, North Carolina and South Carolina.

The criminals target wealthy neighborhoods in places with lax criminal justice laws to conduct their home burglaries, before returning home with the loot while out on bail, according to police.

The San Francisco suburb of Hillsborough is just the latest community plagued by similar schemes, with previous groups hailing from Chile, Colombia and elsewhere in South America.

Hillsborough Police said it suspected the ‘crime tourists’ were behind at least two brazen burglaries that took place recently in the affluent Bay Area community, where the average home price sits around $5.4 million, according to Zillow.

It’s not likely to get better anytime soon. That is why Los Angeles police are warning people that wearing expensive jewelry in public could make them a target for thieves.

The police department’s suggestion Tuesday came as robbers smashed the front window of a Beverly Hills jewelry store in broad daylight and fled with millions of dollars’ worth of merchandise.

Passersby recorded video of Tuesday’s robbery, the latest in a long string of brazen smash-and-grab thefts and robberies of people wearing expensive watches or jewelry in the Los Angeles region.

In the city of LA, robberies are up 18% year-to-date compared to 2021. Robberies with a firearm are up 44% in the same time period across the city.

“Over the last year there has been a marked increase of armed robberies involving victims wearing expensive jewelry while in public. If it is visible, it can be a target,” an LAPD statement said.

Welcome to life in California during the new era of progressive-approved raiding and pillaging.

I was not expecting #4

Who are the police cracking down on? The people defending them selves and their property? Or are they cracking down on the criminals. In a place like Los Angeles it’s likely the former.

That’s right. LA has a psycho Soros DA named George Gascon, who is as nuts as any other Soros DA. How this guy got elected says worlds about ‘vorting machines’.

He’s up against a recall:

Holding back the flood of Crime.

No, it doesn’t say anything about voting machines; it does say a great deal about how Californians vote in these cities, though.

We will never know for certain but I would not be surprised in the least to discover that California was the V. 1.0 beta test for election theft.

Californians may “not” have voted that way.

“Who are the police cracking down on?”

That’s because we don’t fight back violently. After all the number one goal of a Leo is to get home safely to his family each night.

Well be careful when you go there on your trip to take care of business.

I won’t be in LA itself. Just the area.

Still, I wish you a safe trip.

No one was expecting #4 following more than 32 trimesters of nationwide insurrections, violence, occupation, and KKK-style [neighborhood] invasions

#4 is a natural step. They voted for it.

Not so sure it’s professional thieves, buy no matter the more criminals put on street it won’t matter who is doing anyway.

I cannot imagine living in such a backward, unarmed state.

Hey, hey, hey, California!
I bet “Castle Doctrine” and “Stand Your Ground” are sounding pretty good right now!
Why don’t you all write letters to Gabby Giffords and Mike Bloomberg, and beg, beg, BEG them to allow you to pass those?
Of course they’ll say no, but I just want you to be aware of who your real masters are.

It is difficult to free fools from the chains they revere.
–VOLTAIRE

Calif does have the “Castle Doctrine” and “Stand Your Ground.” What it doesn’t have is “will issue” (or “Constitutional Carry”) and D.A.’s who believe the law should be impartial. My County currently has a pretty level-headed Sheriff & D.A., but due to the influx of college students, that can always change.

Personally, I would use the armory as my “panic” room. Otherwise, it seems like a pointless waste of time and money.

Remember: these are Hollywood people. They leave the dirty work to others.

Alec Baldwin did, and look where it got him.

and should you cause bodily injury to one of those attacking you, you will then spend many years and money you do not have defending yourself —-
against the State

How about a little bit of “residents are beginning to enhance their personal” VOTING.

Not happening because in a Democrat state it does not matter who or what real, legitimate voters vote for or against. What matters is what the count the Leftist government comes up with and reports for or against after adding in illegal voters, multiple voters, dead voters, and fictitious voters.

“Welcome to life in California during the new era of progressive-approved raiding and pillaging.”

It’s a feature, not a bug. Most are familiar with the legend ‘Nero fiddled while Rome burned.’ It’s hogwash. The fiddle didn’t exist in 64 A.D. The ‘Great Fire of Rome’ was real. It leveled the city, and left thousands homeless. Nero blamed the Christians. He arrested, tortured, and executed hundreds ’em. Every empire has its Reichstag moment.

Once the ashes were cleared, Nero seized the land to build his lavish and sprawling Golden Palace, and its surrounding pleasure gardens.

Why do I tell you this? Because a purposeful ‘fire’ is raging across our nation in order to fundamentally transform it. Right, Barack? It’s a conflagration of many things: propaganda, BLM, Defund the Police, rampant crime, open borders invasion, Soros prosecutors, emasculated military, anti-science oppression, crippled supply chain, hyper-inflation, etc.

The Calvary ain’t coming to save us. We ain’t gonna vote our way out of it. The chum is in the water. People are fleeing blue states and cities. Once the ashes are cleared, Marxists will demand greater taxation to build… public housing, government stores, and seize control of production; all repopulated by the open borders invasion. Cheap labor, ignorant populace, easily controlled.

“But you can’t do that!,” fleeing people will protest. “Oh, yes, we can, said the Marxists. YOU left voluntarily!”

“The Calvary ain’t coming to save us”
Pet peeve. It’s cavalry.
Although nobody who was on Calvary is coming anytime soon to save us, either.