The Biden administration extended the mask mandate until April 18 as all 50 states started dropping their mandates. 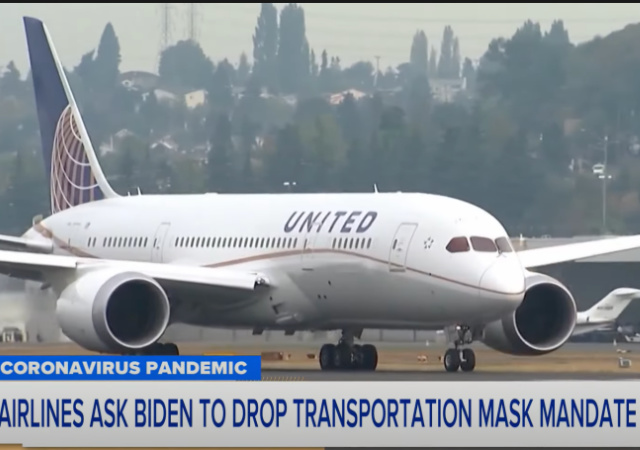 Airline CEOs demanded the Biden administration end the federal mandate forcing people to wear masks at airports and on planes and requiring negative tests for people coming to America.

“It makes no sense that people are still required to wear masks on airplanes, yet are allowed to congregate in crowded restaurants, schools and at sporting events without masks despite none of these venues having the protective air filtration system that aircraft do,” they wrote.

This is why you do not give the government an inch! They will go 5,000 miles! The administration extended the mask mandate until April 18.

One source of frustration for airlines has been the strain on flight attendants and other employees who are tasked with making sure passengers are wearing their masks. The Federal Aviation Administration has logged a surge in reports of bad passenger behavior over the past year, with many incidents related to people refusing to wear masks.

“This is not a function they are trained to perform and subjects them to daily challenges by frustrated customers. This in turn takes a toll on their own well-being,” the executives wrote.

The CEOs also want to end the need for a negative test to come to America:

The predeparture test requirement, imposed to slow the introduction of variants into the U.S., has outlived its utility and stymies the return of international travel. The United Kingdom (UK), the European Union and Canada have recognized this reality and lifted travel restrictions. The U.S. inconsistency with these practices creates a competitive disadvantage for U.S. travel and tourism by placing an additional cost and burden on travel to the U.S. Further, many outbound travelers are not willing to risk being stranded overseas.

Simple solution: ignore the mandates. Get everyone on board, declare it and then do it.

Like it or not, airlines are a regulated industry, and an airline that ignores FAA orders creates a vulnerability on everything else the airline does.

Cowards are too terrified to stand up and do it themselves, so they’re begging Daddy Government to make the decision for them.

They need to be telling Washington to start encouraging America to drill for oil. Masks won’t keep airplanes from flying. But a lack fuel will ground them.

Previously, they didn’t protest because they liked the mask mandate. Now that it is inconvenient for them, now they are asking to have the rule removed.

Yeah, you fools should have stood against all this nonsense the minute it was suggested. Now, while you’re asking for this idiot in the White House to end the mandate ask that fool to start drilling in every state to help being down ticket pricing.

It is important to also pay attention to which airlines did NOT join this demand.

I flew domestically a couple of months ago, relatively short flight, and didn’t wear a mask over my face the whole trip. I sipped diet soda and nibbled crackers the whole trip.

And it is not at all clear the CDC has any authority whatsoever to mandate masks on transportation or any other activity. No such police powers are provided for in the statute. And as a quasi-private enterprise, such may not even be constitutionally proper.

My local barefoot constitutionalist maintains that the constitution authorizes zero police powers for the federal government at all. Even in the cases of defined federal crimes such as counterfeiting, it delegates enforcement power solely to “the militia.”

“The Congress shall have Power … To provide for calling forth the Militia to execute the Laws of the Union, suppress Insurrections and repel Invasions…”

My last long trip was 11 hours in a mask. I got sick from the masking, not covid. This is insanity.

“The CEOs also want to end the need for a negative test to come to America:”

And why not, since the officially-incited situation at the Mexican border is proof positive that it’s all kabuki theatre.

Been flying Southwest lately. Some of their flight attendants are Gestapo-like in their enforcement of mask wearing. It’s become unpleasant.

Yes, I haven’t flown this year yet but half a dozen times last year and they were terrible. Flying at night makes it easy to not wear a mask. In the airports themselves I never wore them except in the tsa line.

There was a small airport in Colorado where they didn’t care, even the employees it was terrific.

I bet the Southwest flight attendants enforce masks even if the feds drop their mandate.

Southwest once was the most friendly airline out there. Now they are staffed with a bunch of crazy-ass lunatics.

With proper circulation, there is no cause for personal protection, let alone devices with 50% effectiveness in the best case, and progressive performance with time, place, and behavior.

The mask mandate was always stupid, as cloth masks were already known to be ineffective at stopping the spread of respiratory viruses via a meta-study from 2020. Fourteen studies collected and analyzed show a negligible effect at best for non-pharmaceutical measures in non-healthcare settings. If the government was truly following the science, this mandate would have been gone in May 2020.

I believe they are keeping this in place for a very specific reason. If they drop ALL of the mandates, they could face a very stiff resistance to re-implementing them. Plus, they spent the better part of two years on a psyop promoting fear, panic and paranoia against the lowest IQ portion of the population, Biden voters. They can’t figure out how to turn off the giant torrent of stupid they let loose.

You can humorously watch Jacinda Ardern just the other day explaining how great and necessary masks are. There’s something seriously wrong with the water in our southern hemisphere.

How can we tell who the 80 million “Biden Voters” are? I don’t believe 80 million people voted for him.

I can tell most of the true “Biden Supporters.”

They are the bunch who have their heads so far up their ass, the sky is tinted brown when they look through their eyes.

They are the bunch who regularly shop at Wegman’s so they can get their “meatless” meat.

I bet the CDC doesn’t drop its recommendations for masks even if they’re no longer required, and that’s all the Federal agencies will need to keep on requiring masks. FAA says “CDC says” and nope, you’ll still have to wear a mask.

Rather annoying that nobody is publicly asking for masks to be dropped in hospitals and doctor’s offices, where they are equally worthless.

Fuck them. Fuck them all. I hope the bastards go out of business due to mask mandates, and the ever-increasing cost of fuel.

Kiss my ass, and drop dead.

“…strain on flight attendants and other employees who are tasked with making sure passengers are wearing their masks.”

Strain??? They love it the power it gives them.
No other industry would dare treat customers that way. It’s always for the “safety of passengers and the crew.”

“Squeeze them. Make the mandate infinite.”

I agree. Make the mask mandate so onerous that people refuse to fly. I want to see abandoned airports like we now see abandoned malls.

I want people to suffer so much that the entire industry makes the demise of Eastern Airlines look like a celebration.

I want the crazy mask monsters gone, fired, eliminated. They can eat lentils and locusts in their destitution.

I want airline CEOs to move out of their gated communities and into 600 sq ft apartments similar to where their passengers have to live.

Karencunt stewardesses need to become Stormy Daniels just to get a meal.