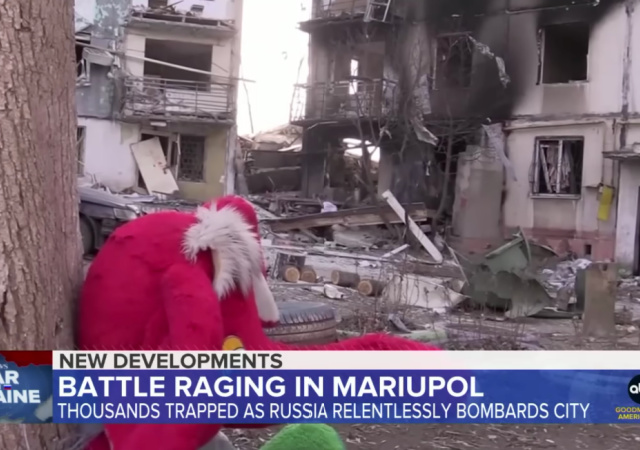 Stick with me, friends. It’s been a month since Russia started its full-scale invasion of Ukraine, eight years after it invaded Donbas and annexed Crimea.

Russia is still holding Mariupol hostage. Biden thinks he can threaten China because we know the Communists will listen to threats just like Putin!

Speaking ahead of a visit by President Joe Biden to Warsaw on Saturday, Polish deputy foreign minister Marcin Przydacz said, however, that the offer still stands.

“The offer is on the table still, but it should be the collective decision of the Nato alliance. We as Poland, still do have this post-Soviet MiG aircraft, we are ready to give that to Ukraine, as they want it from us,” he told BBC Radio 4’s World at One programme. “It’s still being discussed. I believe that it should be (ultimately) our decision based on our interest and on our values, rather than any possible (fear of) reaction.”

He dismissed fears that the delivery of the Polish fighters could inflame tensions with Moscow and potentially broaden the conflict beyond Ukraine’s borders. “I wouldn’t say that Russia needs anything to be provoked. They’ve already invaded the sovereign country of Ukraine without any provocation.”

Give me a break, dude:

Russian Foreign Minister Sergey Lavrov said Friday that “a real hybrid war, total war was declared on us,” over its military activity in Ukraine , according to the Associated Press.

Lavrov said at a meeting that the goal was “to destroy, break, annihilate, strangle the Russian economy, and Russia on the whole.”

But Lavrov also said “we have many friends, allies, partners in the world, a huge number of associations in which Russia is working with countries of all continents, and we will continue to do so.”

The Russians bombed a drama theater in Mariupol a few days ago. A lot of people took shelter but at least 300 were killed:

Some 300 people are now believed to have died in Russia’s bombing of a theatre sheltering civilians in the flattened Ukrainian city of Mariupol.

Officials in the strategic southern port city released the new toll saying the theatre, which was thought to be sheltering more than 1,000 people, was “cynically destroyed by the messengers of the ‘Russian world’” on March 16.

“Unfortunately, we start this day with bad news. From eyewitnesses, information appears that about 300 people died in the Drama Theatre of Mariupol as a result of a bombardment by a Russian aircraft,” a spokesman for the city council said on Friday morning.

“I do not want to believe in this horror…I want to believe that everyone managed to escape. But the words of those who were inside the building at the time of this terrorist act say otherwise.

“[…] Now there is no more Drama. In its place, a new point of pain for Mariupol residents appeared, ruins that became the last refuge for hundreds of innocent people.”

Poland has warned the West for so long about Russia. It should be an interesting visit since Biden told Poland it cannot give Ukraine military equipment. I’ll update this section as soon as it happens.

But if anyone knows Russian aggression it’s Poland.

Let Poland do what it needs to do to feel secure and safe. Poland deserves it.

It’s precious that Biden thinks China is even a tiny bit scared of him:

But in speaking to Chinese President Xi Jinping last week, Biden warned there would be consequences if Beijing is found to be providing “material support” to Putin.

“I made no threats, but I made it clear to him [to] make sure he understood the consequences of him helping Russia,” the president told reporters.

(No threats, but said there would be consequences…um…that sounds like a threat to me.)

China needs the West, after all, right? Biden thinks so:

Biden said he and Xi have had “long discussions” about China’s interest in economic relations and growth with the U.S. and Europe.

“And I indicated that he’d be putting himself in significant jeopardy and those aims,” Biden added, pointing to the number of corporations and businesses that have left Russia following its invasion of Ukraine.

My goodness, the West is so dumb. We’ve relied on Russia and China for so long. We need them more than they need us.

Own it, Europe and America. Russia and China own us.

The Russian troops continue to block aid to the thousands trapped in Mariupol:

About 2,700 people were able to leave the besieged and destroyed city of Mariupol today, Ukraine’s deputy prime minister says.

But Iryna Vereshchuk accused Russia of blocking humanitarian aid convoys into the city for the past three days. The World Health Organization also says it has been unable to reach Mariupol.

Russia has taken control of parts of the city. In one such area it handed out supplies to hundreds of residents who emerged from their places of shelter, according to a Reuters news report from the city.

At the scene was Denis Pushilin, the leader of the Russian-backed separatist enclave of Donetsk, as well as an official from Putin’s United Russia party, Andrei Turchak, according to pro-Russian separatist media.

Turchak wrote on his Telegram channel that Russia would rebuild Mariupol but added – “Make no mistake, Russia is here forever”.

Threaten China with what? These people are deranged.

We rely on China for active ingredients that go into antibiotics, heart medicines and many other drugs. Computers and computer parts are another vital area. If the U.S. does something to sanction China, China will retaliate. They have probably worked out every scenario in advance.

When the pandemic first hit, it became clear how pathetically dependent we are on China for critical care meds. So, Congress enacted a number of laws to begin weaning us from our dependence on the country that is the only current operator of forced labor camps, right? Lolz. Of course not.

Two-plus years later, we’re just as dependent on China for these medication & medical supplies as we were when Americans first heard the name ‘Wuhan.’ Oh, and what’s really infuriating is it’s a BIPARTISAN failure of Congress. The same Republicans who refused to spend a few billion on a wall are the ones who couldn’t care less about what we import from our biggest geopolitical foe.

The two teams aren’t Republican and Democrat, but globalist and nationalist. The globalists want us helplessly under their heel and the nationalists don’t. Hell, this whole Russia thing is just Globalists v. Nationalists.

Exactly and those beating their chest and demanding more US action or involvement in Ukraine are lining up with the supporters of the globalist order.

That doesn’t mean the very real consequences for the Ukrainian people are not tragic nor does it mean those of us with a dissenting view about the level of US commitment are backing Putin.

Many supposed MAGA supporters are lining up to carry water for the WEF. It’s not our fight but some seem hell bent on the US remaining World Policeman, which is the role the WEF/Davos International elite globalists demands we perform.

We are dependent upon China for several things but the Chinese are absolutely dependent upon imported Food and Oil. And, of all the countries that will be hurt now that Ukrainian and Russian grain are completely off the market, China is the one non-African country that is facing a country destabilizing famine.

And, now that 5 million barrels a day Urals crude is dropping off the market, China is facing an energy crisis where trucks could stop moving and the lights could go out.

The only Chinese pipeline going to Europe terminates in Eastern Siberia at an oil field that only exists because Major Oil companies built it and maintained it. They left Russia and that field is going to die. And, the rail line between Russia and China is over capacity already. The Russian grain port is shut down and the oil ports are too shallow for supertankers.

Peter Zeihan has several similar points made… formerly with Stratfor and his topics are on YouTube. The watch word for the world? “Grim”.

To lichau: I think China is more vulnerable than we can appreciate… we shall see.

Speaking of Wuhan, there may be more viruses in China that are accident prone and capable of being “accidentally” released or spread by a bat.

Remember when President DJT was going to get the US involved in WW3? I remember that it occurred almost weekly.

I guess Resident FJB is just trying to one-up his predecessor.

‘Sell Out Joe’ shouldn’t be threatening anyone. He does it to Republicans of course, but unlike Rs, China can bite back.

Meanwhile, the Taliban are opening the worlds largest Army Surplus store. They call it Traitor Joes!

I wonder if Russia has ever done any shopping there.

China will not be refusing economic help to Russia, Russia in the Chinese sphere means a lot, and Ukraine means nothing to them.

1. Kill ourselves-We rely on China for our modern lifestyle including our medicines. Sorry to be blunt but even the most ambitious plan for our economy isn’t instant. That kill ourselves is literal millions will die if Xi turns off the medicine spigot.

3. Use prudence and for once shut up already-When there is nothing we can do perhaps we should stop speaking loudly. We don’t have a stick capable of hitting China.

Will someone please put this guy in a home, already? Rule #1: Don’t make threats if you’re not willing to back them up. And there is no way Biden is going to back this up. We’re not going to war with China over Ukraine.

“We’re not going to war with China over Ukraine.”

I certainly hope not. But then again, I never thought we would have the people we have who are making the decisions who so far have made all the wrong decisions.

It remains to be seen Sundowner doing anything to China, he is owned.

“Officials” report 300 killed? Who are these “officials”?