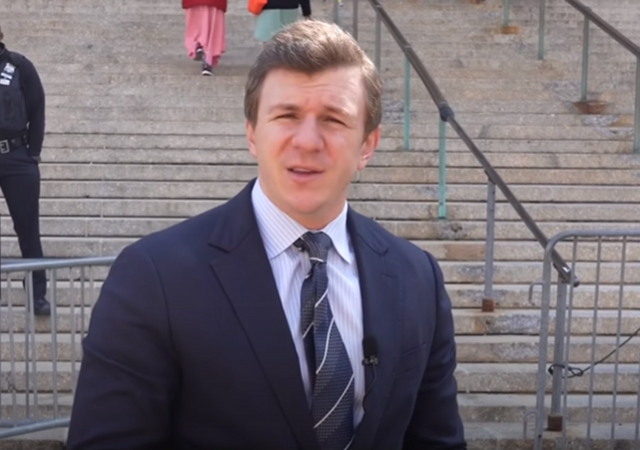 Last fall, Project Veritas was raided by the FBI, which collected various documents and devices. Then things got worse. Despite a judge’s ruling, the Department of Justice went to multiple magistrates and obtained secret warrants to collect communications between multiple journalists from Microsoft.

Do you remember how people on the left scoffed at the idea of the Deep State? What would you call this?

Remember, this is all about a diary that belongs to Joe Biden’s daughter, Ashley.

The Department of Justice then muzzled Microsoft from disclosing these orders via a series of secrecy orders signed by magistrates.

The documents further reveal the DOJ then went behind U.S. District Court Judge, Analisa Torres’, back to obtain extensions on the gag-orders on Microsoft from magistrate judges after Judge Torres ruled Project Veritas was entitled to “journalistic privileges.”

Despite multiple opportunities to do so, the DOJ has not publicly disclosed the orders, warrants, or subpoenas to Judge Torres or Special Master Judge Barbara Jones – who was appointed by Judge Torres to protect Veritas’ “journalistic privileges” from potential DOJ overreach. Judge Torres ruled that the DOJ’s investigation must be overseen by Judge Jones and ordered the DOJ not to review any materials seized from Project Veritas without Judge Jones’ approval.

Take a look at this Project Veritas graphic to understand the series of events (click to enlarge): 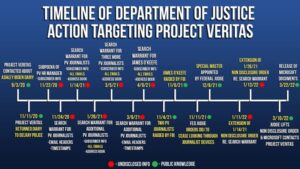 Amazingly, the mostly useless ACLU has issued a statement in defense of Project Veritas.

“We deplore Project Veritas’ deceptions, and we don’t have a full picture of the government’s investigation. But we’re concerned that the precedent set by this case could have serious consequences for press freedom,” Brian Hauss of the ACLU’s Speech, Privacy, and Technology Project said in a press release. “We’re deeply troubled by reports that the Department of Justice obtained secret electronic surveillance orders requiring sweeping disclosure of ‘all content’ of communications associated with Project Veritas email accounts, including attorney-client communications.”

“Compounding these concerns, the government suppressed information about the existence of the electronic surveillance orders even after the investigation became public knowledge and the district court appointed a special master to supervise prosecutors’ access to Project Veritas’ sensitive materials. The government must immediately suspend its review of the materials obtained pursuant to its electronic surveillance orders and fully disclose the extent of its actions, so that the court can consider appropriate relief,” Hauss added.

Liberal media outlets will ignore this or simply roll their eyes because they don’t think of O’Keefe and Project Veritas as “real” journalists, not realizing that their opinions are not the point.

This could just as easily happen to them.

The Biden DOJ is waging cyber civil war against conservatives.

Anyone with a brain can FINALLY see what incompetent, cowardly sell-outs both William Barr and Jeff Sessions are.

I call it a one-party surveillance state. Others call it the deep state. Not much difference.

Nothing to see here folks. Move along!

James O’Keefe, journalist par excellence. James has been doing the work that NO OTHER JOURNALISTS are able or interested in doing.

60 Worthless Minutes is not fit to open the door for James. Network stooges are unworthy to flush his toilet but the worst of it is that the judicial system has sold out for less than Judas Iscariot, and they got NOTHING for their professional depravity.

Modern justice and the Southern District of New York are the new standard for government vigilantism. Damn them, fully, they belong where Epstein is.

Yeah, everything he said.

So don’t forget–like LegalInsurrection, Project Veritas runs off YOUR DONATIONS, and nothing else.

Plus, donations to them happen to be legally tax-deductible. Woo hoo!

(Their finances are behind the curve at the moment, because the major storms you may remember ripping through New England about six months ago completely destroyed their HQ and all their equipment.)

I thought that I understood the nature of the Beltway, in reality, I was clueless.

Remind me again how many subpoenas RINO trash Grassley and Graham issued when they were in charge of the Judiciary?

What penalty will Torres levy for this breach of her order? None at all I expect, Federal judges pretty much never sanction government actors, Federal or state, no matter what they do. Sanctions are for private actors.

Don’t worry, Kenji “Pedo Girl” Jackson will rule on it.

deeply worried about her Out Come based, Agenda driven mentality

It’s not even clear if that judge eventually sanctioned the DOJ lawyers in this case if the lawyers themselves would have to pay the fine(s). They likely wouldn’t have to pay for their own criminal defense lawyers themselves. The best legal minds available would be provided by the DOJ even if that meant they had to go to the private sector, so long as the DoJ determined that the actions they took fell within the scope of their official responsibilities.

I believe (but am not certain), that in cases like this, the DoJ uses policy guidelines to determine if the behavior of the government employee warrants defense paid for by the US taxpayer. Even in some circumstances, the DOJ might elect to pay for the CRIMINAL defense of its own employees. It’s insane….but, The Swamp sure does like to take care of itself. This is why Clinesmith is already back to practicing law.

If Clinesmith was working at a private law firm and fabricated evidence in a criminal investigation, he would have been prosecuted, convicted and sentenced to prison and stripped of his law license.

“This could just as easily happen to them.”

1. Yes if we take over every institution in America it could happen to the left until then it can’t

2. It doesn’t happen to the left

3. Our problem is not that it could happen to MSNBC if we succeed in taking over every institution in America our problem is it is happening to us now.

Stop trying to use “it could happen to you” it isn’t persuasive, defend our rights and us. We the deplorables don’t deserve to be treated like terrorists so stop pretending treating us like terrorists isn’t our problem.

Look back only nine years, during the reign of Lord Obama, when the DOJ scraped the phone records of two dozen or more phones used by dozens of individual journalists working for the AP.

The AP are a lot of things, but they are not conservative.

They weren’t the targets they were targeted to get information from them. Project Veritas is the target the Federal Government is trying to shut them down and put them in jail on trumped up charges. You don’t see the difference?

There is no difference.

I understand you like being on the other side of whatever position I put forward, but I frankly don’t believe you I think you do see the difference between the two scenarios.

This could just as easily happen to them.

“Remember, this is all about a diary that belongs to Joe Biden’s daughter, Ashley.”

I don’t think this has much to do with a diary. That’s the excuse, not the reason. They don’t want these nosy investigative journalists poking around so much.

Furthermore, keep in mind that the “unsecured availability” of the diary happened at a time when Joe Biden lacked all official connection with the federal government (other than as a candidate for office), and yet here comes the DOJ, carrying his water in platinum-plated buckets, jut as it did for his son when his illegally purchased gun was illegally disposed of by his booty-call sister-in-law, in a school zone, illegally.

Note the obligatory slaps at PV in the Atheist Certain Liberties Union’s statement so that it basically reads, “James O’Keefe and his icky bunch of lying despicable agitators who are totally not REAL journalists are a blight upon the land and shouldn’t be allowed to function with their unhelpful muckraking activities. That said…hey you guys, if you start doing this to fake journalists like them, what will happen if those deplorable white supremacist Nazi Rethuglicans somehow manage to get back into power with the help of Putin and use this precedent to crack down on legit for realsies journalists at approved Democrat-Media Complex outlets to find an excuse to end democracy without our opposition? Maybe chillax on the urveilancesay?”

So an authorized judge would not sign a warrant so they went to a magistrate, which I assume is a sort of judge of a lower classification? Sounds like chicanery to me. Judge Torres should put them all in jail.

Note the obligatory slaps at PV in the Atheist Certain Liberties Union’s statement so that it basically reads, “James O’Keefe and his icky bunch of lying despicable agitators who are totally not REAL journalists are a blight upon the land and shouldn’t be allowed to function with their unhelpful muckraking activities. That said…hey you guys, if you start doing this to fake journalists like them, what will happen if those deplorable white supremacist Nazi Rethuglicans somehow manage to get back into power with the help of Putin and use this precedent to crack down on legit for realsies journalists at approved Democrat-Media Complex outlets to find an excuse to end democracy without our opposition? Maybe chillax on the urveilancesay?”

But worse, it’s a fully independent DOJ, that isn’t answerable to the leader the people elect if hes from the “wrong” party.

Whoever AUTHORIZED this should be fired and THEN charged so they can foot their OWN legal bills!! This is the kind of crap that DICTATORS use – telling isn’t it??? THIS should be GROUNDS for IMPEACHMENT! BUT, we need the following to take place : First the R’s take the HOUSE and the Senate and PUSH for SUPER MAJORITIES – THEN the House elects PRESIDENT TRUMP as Speaker of the House (charge $20 PPV for the Nanshee’s handing over of the gavel ceremony) – THEN IMPEACH the turnip AND the trollop – THEN PRESIDENT TRUMP regains his RIGHTFUL place – AND since there would be less than TWO YEARS in that term he would be ELIGIBLE for a FULL TERM ELECTION! I would love to see that take place and Governor DeSantis become VP !! I dream BIG!!