“The hypocrisy and absurdity of this is that she was nominated by President Biden in large part because she is a woman.” 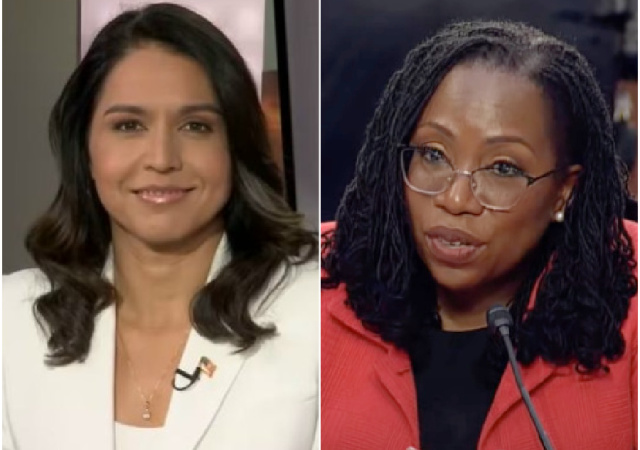 Brown Jackson told Sen. Marsha Blackburn (R-TN) that she’s not a biologist so she cannot define a woman.

(1/2) In order to have a Supreme Court committed to protecting the rights of all Americans, including women, every justice needs to understand there is such a thing as a woman, as distinct from a man. Yet when asked to define the word “woman,” Supreme Court nominee …

(2/2) … Judge Ketanji Brown Jackson said, “I don’t know.” The hypocrisy and absurdity of this is that she was nominated by President Biden in large part because she is a woman. 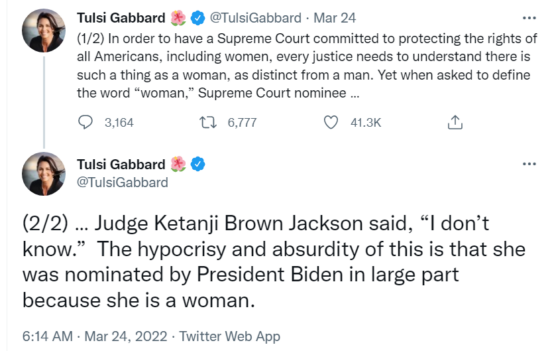 The Bee will put out no less the 50 jokes on this. All of them are worthy of spitting coffee.

The Bee will soon be out of a job.
The left has made parody pointless.

The Bee most definitely has one of the most challenging tasks in the history of mankind. I can’t even imagine trying to come up with anything more preposterous than the retarded communists have already cooked up on their own.

The left has made parody illegal 🤬

No, the Bee will simply print news and the other publications will be parodies, which is already the case. That’s why the Bee awarded Rachel Levine its Man of the Year Award. Is that parody?

Women know who they are without expert input.

Women are equal in rights and complementary in Nature/nature.

The “womenfolk” are not a bloc. Diversity [dogma] (i.e. color judgment, class-based judgment) is an archaic concept that is well past its viability date.

Tulsi seem determined to be the one-eyed (wo)man.
Republicans better freaking find some balls and catch up to her.

She’s very left on most things

A lot of people can’t see she is just being positioned. How crazy is it that “almost sane” is a selling point?

Then again, we have McConnell, McCarthy and Rona Rat Romney running the GOP.

It is curious that biologyonline.com does have definitions of “female” and “woman”:

A “woman” would be an adult member of the species homo sapiens that is not a male.

Having stated that, there are some individuals who have other than “XX” or “XY” chromosomes and others who have had non-normal exposure to hormones while developing in the uterus, They may exhibit physical characteristics attributed to the opposite sex or a combination of both, There are also some who have either “XX” or “XY” chromosomes and have the appropriate corresponding physical characteristics who incorrectly perceive that their gender is incorrect.

She probalby shouldn’t have been admitted to law school. She was probably carried out.

What is she, a race-ologist?

Oh I’m real sure she is a Critical Race Theorist

Anything of or pertaining to anyone not black.

I’d like to hear her define anything, without reading it from a book. She’s about a worthy of the Supreme Court as Kamala Harris.

It would not surprise me to hear the Kamala Harris has been promised the next seat on the court. This is in trade for her resigning from her position as vice president.

We’re at the end of our rope, nationally. Anything is possible.

Here is a link about a Seattle Maturity Hospital that has trouble defining a woman also.

Is this where they fix immaturity ?

It’s where they send leftists to grow up.

At least she acknowledged that it’s a matter of biology rather than social construction or personal belief.

This is the obvious endpoint of credentialism. This rot is endemic in government, where you are promoted based on credentials and time in grade, not job performance. If you don’t have credentials then what you say is by definition wrong.

Her husband is a doctor. I am certain biology is a requirement in becoming a doctor. Maybe he can explain it to her.

Let’s hope he’s not an androcologist.

Okay. Now I have to look up androcologist.

I’m guessing that was a typo – andrologist would fit the discussion.

I realize it is in the poorest of tastes, and very rude.
KBJ is a dumb jogger.
I am a sinner, and I live with it.

As Tuck put it, this Transgenderism is a con

If this judge doesn’t know what a woman is, how do we know if Slow Joe fulfilled his promise about a nomination of a black female? Does she know what black is?

What a dummy, huh?

The following would have been the appropriate follow-up questions to Jackson when she said she needed a biologist to define what a woman is: Are you a woman, or are you some being of unknown sex? Also, if you can’t tell what a woman is, how will you adjudicate issues having to do with discrimination against women?

If this adult judge can’t define what a “woman” is because she’s “not a biologist”, then why the Hell would we expect a child to know if they are a “girl” or a “boy” and then give them puberty blockers. They aren’t biologists either which means they can’t possibly know.

then shut the fk up.

To those who claim “trans” women are women I have this test.
You are a regular guy dating some blonde chick on the U. Penn. swim team. You tell your best buddy you can set him up with another swimmer on the team. She’s tall, brunette, pretty good looking. The test is this- does your buddy accept this tall swimmer as a great date? Or does he say, “What were you thinking?-he’s a dude!”