Don’t Know Much About History Week at Legal Insurrection

Don’t Know Much About History Week at Legal Insurrection 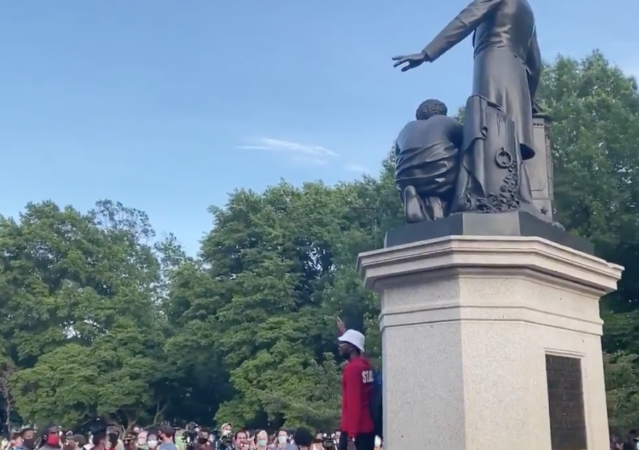 It is now clear that the people attacking monuments have no appreciation of American history at all.

There’s no end to it.

The left is so unhinged.

This woman is involved in the creation of school curriculum.

New York is in terrible hands.

These two are such a disaster.

Who could have predicted this?

It was honest of the singer in that 1960 release to admit his academic — so much, then, his social — shortcomings, a working knowledge of history included. But, “I do know that I love you” was, therefore, a comforting consolation for the listener, no less his beloved, we’re sure.

Sixty years later, America and her destruction’s citizen-“listeners” aren’t so lucky. Not only do we listeners learn about the American destroyers’ conspicuous lack of historical knowledge, among other subjects of interest and concern, we see evidence of a blind and foolish, raging passion for another belief system entirely.

It’s clear enough to all the brokenhearted among us: unlike the gist of that Sam Cooke song, we hear amid all the obvious ignorance today no compensatory knowledge that America herself, at least, is certainly loved. In fact, she is hated and despised — and in the ignorant, rioting demonstrators’ view, meant for destruction.

As if we’re surprised to find this out, after years of witnessing and being informed by the MSM of their claimed “reasons” to “protest”.

We needn’t hold the worst of angsts, I reckon. America is still loved by the right kind of people — the free and the brave — and there’s plenty more of our kind than there are of theirs.

It might take from several years to a decade or perhaps more, but ultimately, we’re on the winning side: we’ll win back our country, as it deserves to be loved and defended.

It’ll be a slog, but a worthwhile one, to be sure.

When I saw the title, that song was the first thing I thought of, then “Those who cannot remember the past are condemned to repeat it.” by George Santayana.