Woman screeches, “Why are you protecting it?” and melts even further down when asked “Who paid for it?” 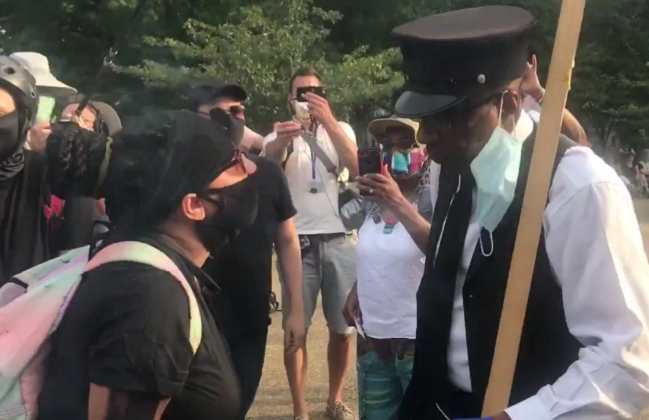 Earlier this week, Kemberlee blogged about the radical mobs planning to destroy the Emancipation Memorial in Washington DC.  The first two scheduled attempts to pull down the memorial didn’t pan out, and the memorial, paid for by freed slaves, still stands.

Vandals who want to tear down or otherwise destroy the monument are still out in force, but they are meeting resistance and honestly look like absolute lunatics.

For example, watch this black woman have a complete meltdown when she confronts two black men who are trying, patiently and kindly, to explain to her exactly why this particular memorial should not be destroyed.

She completely loses it when asked who paid for the monument, seemingly because she doesn’t know and that ignorance infuriates her.

“Why are you protecting it?!”

BLM activist gets into a verbal exchange with an older black guy who was speaking up against tearing the statue down.#emancipationstatue pic.twitter.com/4crUOJhDFP

How very generous of you.

notamemberofanyorganizedpolicital in reply to Squires. | June 27, 2020 at 3:36 pm

When woman with daddy issues meets a father figure.

I was hoping he would have finally said that freed slaves paid for it. Not necessarily for her to hear, since she was clearly not interested, but for the others around her.

My hat is off to the two courageous gentlemen attempting to inject some sanity into an insane situation.

So many of these protesters appear to be off their meds.

Notice how the guilty think they can tell those that know the truth how they are wrong.

Tell? Haha! Something tells me this is how she treats the person she orders a hamburger from, the person who might sell her a coffee and her kids who ask what’s for dinner. Hope this goes viral.

This is one of those women that went crazy when Hillary was not elected. I have talked to people that swear it happened to a retaliative. At first I thought they were exaggerating, but as estate plans came into focus, it became evident it was a very real and destructive phenomenon. Daughters and sisters, a few men, that seem to have gone crazy and cannot pull out of it. Taking it out on brothers, fathers, grandfathers, cousins…abusive to the point of complete estrangement.

As the prof has explained, we cannot accommodate an edit function on WordPress.To make that possible, we need to move to open comments via a third party app like Disqus. We are not doing that. Period.

Try to proof your own posts or follow up with edits . . . and be happy that LI is not a disgusting morass of crap commentary from every passing leftist loon and “earn 800 dollars sitting on your ass” spam. Love what you have here because it’s not the norm, the norm is crazy and spam and nothing remotely resembling our LI family.

If that’s the only problem, here’s a solution

I thought “retaliative” was a perfectly good word for what you described. I’m going to use it myself.

There is an edit function: it’s called the “Submit” button. Best and most comprehensive way that I know to find spelling and grammar errors.

Must be one of the reasons the MSM/DNC axis has suddenly gone silent on the activities of the BLM/Antifa brownshirts. Barely 48 hours ago these groups were the moral touchstone of modern history, beyond any criticism or opposition. Now they have suddenly ceased to exist, at least judging by the sudden non-coverage.

AniFa and BLM are largely populated by the insane and criminals. While useful as street cannon fodder, they are dangerous loose cannons, if not controlled. The “leadership” of both organizations are controlled by the came people who control the DNC and the media. That is why these three facets of the Progressive liberal left always work in sync with each other. When the lawfare attack on populism failed, the media and the political sing of the Establishment launched the COVID terrorist scam. When that began to lose traction, the Establishment opened up the systemic racism scam and injected the anti-American street soldier corps to “demonstrate”, riot and loot, As the backlash is beginning to build against that tactic, we are now back to the COVID terror scam, while the civil unrest tactics are pulled back. This is all strategic. Do not allow yourself to be distracted by the little things. There is an all-out war against the population of the US as well as Populism world wide.

She was screeching so much I couldn’t understand a word she said.

It’ s ok ,neither could she.

Me too. The only words I could make out were “Yes, yes, yes”, and “Why are you fighting me?”

In Charleston, South Carolina on Thursday night, vandals (AKA anarchists) desecrated a monument that had been erected to honor nine Charleston firefighters who perished in the Charleston Sofa Super Store fire in June 2007. Two ofthe firefighters were black.

They’ll probably never catch the perps, and if they do, they’ll simply gently slap their wrists.

This has nothing to do with race.

Pants On The Ground

This Thursday was the 26th anniversary of the Lubavitcher Rebbe’s passing. A photo has been doing the rounds of him, at the age of 88, carrying two heavy bags of letters that he’d received from people seeking his help, and refusing offers from two of his secretaries to help him carry the bags. The photo is accompanied by a comment that this shows his dedication, and how he literally carried the world’s burdens. All three men in the photo are now dead (one of them died of the Wuhan Disease). I just saw a response from some pig-ignorant woman, a spiritual sister of this lunatic, complaining that the three men in the photo are not wearing masks or keeping 2 meters apart. When someone explained that the photo was 30 years old she simply replied, “well, I bet he’s still not wearing a mask”. On it being suggested that she Google the subject she replied that would not do so because she had no interest in rabbis.

She was pissed off that they didn’t allow her to win, with her a hysterical, screechy voice. She’s used to getting her way. She’s not used to being countered by calm, collected voices. So she stomped off to find someone who would let her win.

I was expecting her to demand that he let her speak to his supervisor.