“It was like an aggressive tiger in March and April but now it’s like a wild cat.” 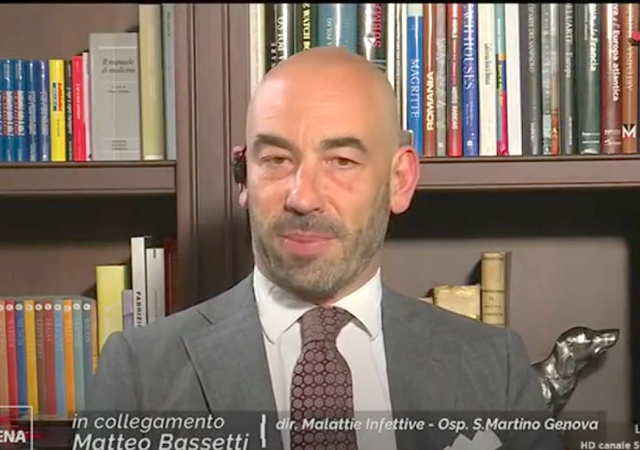 In an interview with The Telegraph, an Italian infectious disease doctor said he believes the coronavirus could die out on its own without a vaccine:

Prof Matteo Bassetti, head of the infectious diseases clinic at the Policlinico San Martino hospital in Italy, told The Telegraph that Covid-19 has been losing its virulence in the last month and patients who would have previously died are now recovering.

The expert in critical care said the plummeting number of cases could mean a vaccine is no longer needed as the virus might never return.

“The clinical impression I have is that the virus is changing in severity,” said Prof Bassetti.

“In March and early April the patterns were completely different. People were coming to the emergency department with a very difficult to manage illness and they needed oxygen and ventilation, some developed pneumonia.

“Now, in the past four weeks, the picture has completely changed in terms of patterns. There could be a lower viral load in the respiratory tract, probably due to a genetic mutation in the virus which has not yet been demonstrated scientifically. Also we are now more aware of the disease and able to manage it.

“It was like an aggressive tiger in March and April but now it’s like a wild cat. Even elderly patients, aged 80 or 90, are now sitting up in bed and they are breathing without help. The same patients would have died in two or three days before.

The human body was not used to the coronavirus, but exposure helps the system build antibodies.

Bassetti thinks the virus “mutated because our immune system reacts to the virus and we have a lower viral load now due to the lockdown, mask-wearing, social distancing.”

The doctors “still have to demonstrate why it’s different now.”

It’s important to note Bassetti says it could probably go away completely on its own without a vaccine. No guarantees!

Dr. Bharat Pankania at the University of Exeter Medical School does not think the coronavirus will not “die out that quickly.” She stated that it could do that “if it has no one to infect.”

“If we have a successful vaccine, then we’ll be able to do what we did with smallpox,” Pankhania told The Telegraph. “But because it’s so infectious and widespread, it won’t go away for a very long time.”

Italy became an epicenter of the coronavirus in Europe. However, even after opening up in early June, the numbers look promising:

The latest data from Italy’s Civil Protection Agency, issues Sunday, showed 24 new deaths in the preceding 24 hours, the lowest number since March 2. The national death toll overall currently stands at 34,634, while the total active cases throughout the country stand at 20,972 as of Sunday, according to CNN. Despite the recent improvements, the county still has the world’s fourth-highest death toll, after the U.S., Brazil and Britain.

The number of people in intensive care is also down, falling from 152 on Saturday to 148 on Sunday, according to Reuters. A total of 182,893 of people have been confirmed to have recovered from the virus, Reuters reported.

I hope for the best while preparing for the worst.

Don’t forget to vacuum pack your body before you go out.

the proponents of the lock downs and masking are essentially advocating that the human race evolve to where humans can only survive in a sterile environment.

good point on the bubble wrap

These masks are like Maoists armbands, or Nazi armbands: there is a reason those genoicidal regiemes used them.

I am at considerable risk, the goal is to delay catching the virus until a vaccine is available. There has been considerable progress in treatment. Quite a number of people have paid for that progress with their lives.

Their misfortune has given others that are at great risk warning and a chance to survive.

For those who are dismissive because their risk is low, keep in mind that eventually many will graduate to high risk.

This virus has been used to become a plague to libery.

A virus too fatal doesn’t spread as well as a variety of it that’s milder, because the severe host doesn’t infect as many people.

The mild virus drives out the severe one (by becoming more widespread), with immunity to either serving for both.

Well, in this case, a severe variety has evolutionary pressure on it to die out, because those who catch it are quickly sequestered away, while mild non-obvious strains that spread broadly are not even noticed. If indeed contracting the mild non-symptomatic version of C19 causes or encourages antibody production for the severe version, a vaccine will be just so much million-dollar research poured down the drain. (or at least used against other types of similar disease, since real research is never really wasted)

Let us hope this is so.

“quickly sequestered away”. Not really, people aren’t tested in most cases until symptomatic. The spread has already happened by this time.

The shutdown was our attempt to quickly sequester everyone away pre-emptively to weed out those that we couldn’t realistically catch before they were able to spread to others. Time will tell if it worked but I seriously doubt it was enough time for beneficial mutations to both occur and take hold.

I’m aware of the theory and been waiting anxiously to see if more evidence comes out for it. I’m optimistic but realistic.

The problem is at the current low mortality rates, I’m not convinced that there’s enough pressure to force a less virulent strain to the forefront.

I’m not sure if he’s right about this one…it’s complete speculation with a few promising but very premature observations.

Two Italians: this man, and Fauci.

And we get stuck with the clown.

Fox News radio news is trying to stir up hysteria about another round of covid. It’s so blatant.

I’ve wondered if us humans aren’t in fact a type of filter for cleaning and eradicating viruses? I.e., a virus infects me and my natural defenses declare war on it. So the guy who gets it from me has an easier time of it because what I passed on had its arse kicked?

I can’t see myself ever being a doctor, but that’s a thesis I’d have liked to chase.

I’d still have had fun exploring the idea. Over beers, of course. Though I suspect my theory would be quickly derailed upon figuring that we’re just as easily incubators as filters.

Darwinism is survival of the fittest.

If the virus wiped us out, and took over human life, making humans into their zombies (or millennials), some other virus would target in on the zombie/millennials. Hey, this is sounding kinda cool…

That sounds rather Lamarckian…

As in “There once was a quack from Nantucket …”?

Laura Ingraham had a virologist that mentioned something called Muller’s ratchet. It has to do with the way that a virus replicates.

They tend to fizzle out. No surprise.. Look it up.

Strains fizzle out, but there are plenty of survivors. Over enough time, the Italian is right. Viruses become less lethal. The ones that allow their host to survive are able to spread.

I don’t think this happens in just months. But it could.

Could be the people who didn’t die in the first wave are just more resistant.

Published in the on-line version of the Journal of Virology … it was reported in early May that ASU scientists had found a new and weakened strain of Covid-19.

This Italian guy may be right … time will tell …

Still preliminary but interesting. If it pans out to weaken the strain, then we should consider a strategic spread of this strain.

If you want to entertain yourself, look up the annual Italian national death toll just from influenza over the last eight years or so. Then ponder that according to the Italian figures, no one has died of influenza this year.

If you’re feeling exceptionally industrious, add in the annual deaths of Italians over 80 with chronic conditions like emphysema, COPD, lung cancer, and similar respiratory diseases.

Have a look at those annual numbers. Then look at “34,634”. Ponder the two together.