Study finds that Palestinian textbooks indoctrinate students to delegitimize Israel, demonize the Jewish State, and incite them to violence. 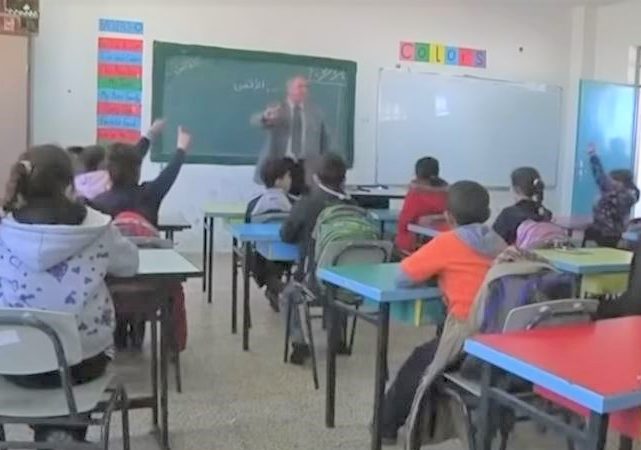 Last week The Jerusalem Post reported that a recent study of Palestinian Authority textbooks found that the ones used in Palestinian schools are preparing students “for a continuous and long-range confrontation against the State of Israel in order to achieve the final goal, which is the establishment of the State of Palestine that will stretch on the entire territory of the Land of Israel.”

The study, conducted by Dr. Arnon Gross of the Meir Amit Intelligence and Terrorism Information Center, who was assisted by David Bedein of the Center for Near East Policy Research, surveyed nearly 400 textbooks that were in use by Palestinian schools between 2013 and 2020, as well as over 100 teacher guides from 2018.

They found three main strands of indoctrination running though the texts: delegitimization of the State of Israel’s existence, including the denial of Jewish holy sites within Israel; demonization of Israel and the Jews, who are regularly referred to as “the Zionist enemy”; and incitement to violent struggle to reclaim the whole of Israel as Palestine, with no education for peace and co-existence.

“Schoolbooks are specifically important in societies in conflict, because they indicate the narrative the leadership and society strive to instill in the minds of the younger generation,” the report notes. “The schoolbooks issued by the Palestinian Authority indicate, then, the essence of the narrative as far as the conflict with Israel is concerned. It is learned from the PA schoolbooks and teachers’ guides that the education of the younger Palestinian generation prepares it consciously for a continuous and long-range confrontation against the State of Israel in order to achieve the final goal, which is the establishment of the State of Palestine that will stretch on the entire territory of the Land of Israel. There is no trace in the schoolbooks of the argumentation disseminated by the Palestinian Authority in the international arena that the Palestinian Authority is committed to “a just peace” based on the two-state solution.”

The full report is here.

The schoolbooks vehemently deny the Jewish past of the Land of Israel and call it “legends”. This is a new argument, as the former schoolbooks included pieces that dealt with Jewish history in the Land of Israel in antiquity. The non-recognition of Jerusalem as a holy city to Jews, however, has been there all along.

Aside from the general problems – denial of Israel’s legitimacy, promoting violence – the Palestinian textbooks also glorify terrorists. The Post reported that a fifth-grade history text described the notorious terrorist, Dalal Mughrabi, as a “’female martyr’ who ‘painted with her struggle a picture of challenging and heroism which have made her memory eternal in our hearts and minds.’” Mughrabi was the leader of the terror cell that carried out the 1978 Coastal Road massacre leaving 38 Israelis, among them 13 children, dead.

Palestinian PLO terrorist Dalal al-Mughrabi participated in murdering 38 people including 13 children on a bus near Tel Aviv in 1978. Their goal was to stop peace talks with Egypt. Palestinian PLO textbooks today refer to her as as a “martyr” and “super heroine.” pic.twitter.com/1RAujnM7PO

It’s interesting that the Israeli far-left newspaper, Haaretz, last week featured a story accusing Israel of having racist textbooks. The Haaretz article got some play on Twitter including from University of Maryland Professor Shibley Telhami.

The Israeli occupation of Palestinian territories is rarely mentioned in history, civics or geography textbooks, according to a Tel Aviv University study.https://t.co/mDZhPhFOvl

Of course, viciously anti-Israel and antisemitic Palestinian textbooks are nothing new.

Miriam Elman had written a couple of earlier reports on this phenomenon.

In November 2017, she cited a report by IMPACT-se that found that the textbooks don’t speak of peace, encourage martyrdom, and justify violence against Israel. The study was later used by Sen. Todd Young (R – IN) to ask a State Department nominee, “Do you commit to looking into this issue, reporting back to my office within 90 days with a plan to ensure that U.S. tax dollars are not supporting the use of textbooks that foster hate, hate towards Israel, support terrorism or degrade women?”

The importance of exposing the extremism of the Palestinian textbooks was enunciated by Israeli Prime Minister Benjamin Netanyahu, who said in January 2014, “You see it in the state-controlled media – the government-controlled media – in the schools, in textbooks, in kindergartens. You see it at every part of Palestinian society. So instead of preparing Palestinians for peace, Palestinian leaders are teaching them to hate Israel. This is not the way to achieve peace.”

One can agree or disagree with the Israeli decision to extend Israeli law to parts of the West Bank, but unless the Palestinians stop teaching hate and resentment and refuse to accept Israel’s legitimacy, there will never be peace.

Here is a prior TV report on the problem:

nazi’s gonna nazi, what can you say?

They are just cannon fodder.

How do people become so deranged that they systematically poison their children’s minds? And then they use them as inhuman bombs. This is the most damning thing about Palestinians.

I do not think there is a prayer in hell of salvaging Palestinians. They are like rabid animals, which will probably have to be put down.

Israel deserves peace, and in order for them to ever have peace, Palestinians will have to be given peace.

I think it would have to go like this:

1) Arabs in the surrounding countries (and Persians) decide they want prosperity, education, healthcare for their people instead of a religious kingdom where 0.00001% of Arabs get endless money and women.

3) The “Palestinian” lie is abandoned and defunded; they can no longer wage war

4) Arabs living in Israeli land that was disputed for the purpose of killing Jews and destroying Israel are given financial and other incentives to move to their Arab countries of origin where they can start better lives and share in prosperity. Arab countries have plentiful extra space.

I object to greasing lowlife palms. Perhaps lowlife should have a broomhandle which passed through orifices at each end?

Considering history to date, any cash flow they receive will be used for ongoing terror. I find it difficult to believe that pathological Palestinians can be salvaged.

“…but unless the Palestinians stop teaching hate and resentment and refuse to accept Israel’s legitimacy, there will never be peace.”

I have a slightly different version: until the lie that is Palestine is completely rejected and those Arabs are living in Arab countries who no longer seek the destruction of Israel and the death of all Jews, there will never be peace.

Arab Muslims’ fealty to the intrinsically supremacist, totalitarian, belligerent and hate-filled tenets of jihad are the biggest obstacle to peace in the Middle East, not Israeli Jews’ resistance to jihad in self-defense and in self-preservation, whatever the vile jihadists and their useful-idiot, dhimmi allies on the Left may say.

“Study finds that Palestinian textbooks indoctrinate students to delegitimize Israel, demonize the Jewish State, and incite them to violence.”

I’d wager that if you did a similar study here (esp. in higher ed) you’d find that textbooks indoctrinate students to delegitimize the founding of the United States and its founding principles, demonize the majority population (white and Christian), and incite them to destabilize and eventually overthrow the white, colonialist patriarchy that controls the country.

Which is to say that the education system here has much in common with terrorist propaganda.

The difference being that in the Pal textbooks, the calls for violence, murder, and sacrificing one’s life to kill Jews is overt and frequent.

And it’s not just the textbooks, it’s rife throughout the entire society. It’s in the music, in the mosques, the schools, the TV programming, the public squares (that are named after suicide bombers), and everywhere else you can think of. Killing Jews gets you on the PA payroll for the rest of your life (or your family after you’re dead).

I should add that if you haven’t yet seen the equivalent of the Pal “Sesame Street” glorifying the killing of Jews, then you ain’t seen nothing.

The PA has made it impossible for the leaders of the PA to accept any peace settlement; they know they’d be killed as a “traitor”. Not that they have any interest in really running and building a country anyway when they get power now and the ability to skim hundreds of millions of dollars to squirrel away in foreign banks.