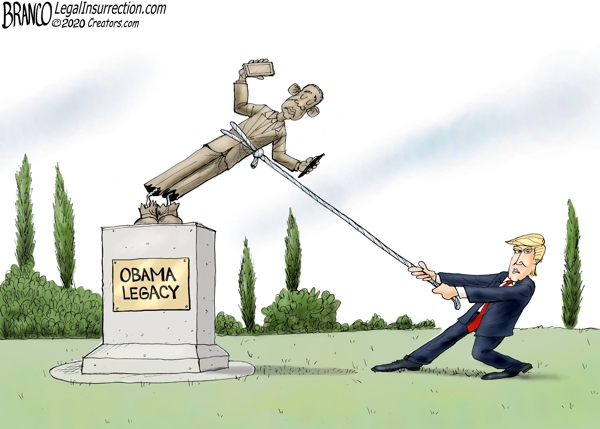 On a side note does anyone else see the comparison to the Iraqi people toppling the statue of Saddam Hussein?

Quite illustrative of what I’d like to see done. Not only take down the “Fundamental Transformer’s” big government policies, but the policies of the last 120 years. There would be so, so many statutes that I’d want Congress to repeal, all in advancement of seeing Members of Congress being faithful to their Article VI’s oaths to maintain limited government (“That to secure these rights, Governments are instituted among Men, deriving their just powers from the consent of the governed”).

When do the pols ever talk seriously of limited government? The racket and the ratchet is always for more and more government. In 1787, Tax Freedom Day (that day in the calendar year when the average citizen’s annual cost of government is satisfied) was in early January. Today, TFD is late April. And in big government states (CA, NY, IL, et alia) TFD is even later. And you’ll notice that all big government states are DEMOCRAT-controlled. But the GOP is no small government wannabe either.

“The makers of our Constitution undertook to secure conditions favorable to the pursuit of happiness. They recognized the significance of man’s spiritual nature, of his feelings and of his intellect. They knew that only part of the pain, pleasure and satisfactions of life are to be found in material things. They sought to protect Americans in their beliefs, their thoughts, their emotions and their sensations. They conferred against the government, the right to be let alone—the most comprehensive of rights and the right most valued by civilized men.”

Artistic license, ok.. but the truth is that statue could have been toppled by gentle shove. It was made of clay.. from top to bottom a fake.

It would have been nice to see the army of Americans who supported PDJT throughout right behind him, helping to pull.

Obowelmovement belongs in the trash heap of history where all the other Marxist’s reside.