Tear Down That Statue Week at Legal Insurrection

Tear Down That Statue Week at Legal Insurrection 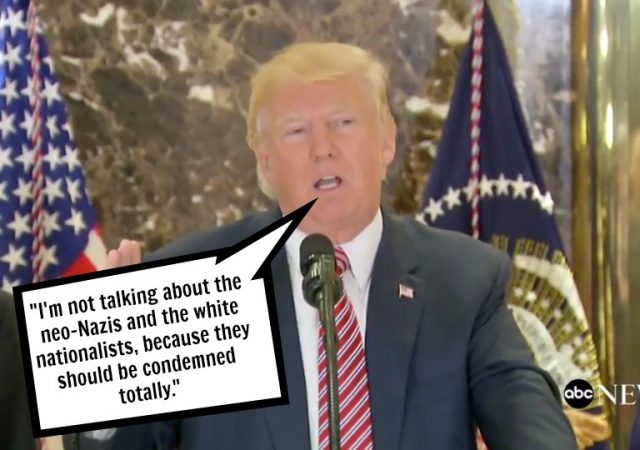 The protest in Charlottesville, VA, had this week filled with news of people all of a sudden wanting to tear down Confederate statues, which evolved to changing names and even demands targeting our founders.

Trump released one statement. Then he held a press conference, which supposedly went off script and the media twisted his words. Kemberlee had to set people straight.

But still, Trump is totes a racist.

Yet, there was violence on both sides.

Bill Kristol did the unthinkable.

While people bitched about statues, Spain and Finland experienced terrorism that left dead people in the streets.

In better news, the federal court in Detroit sentenced Odeh to deportation.

The MTA keeps getting worse.

The majority of women in Iceland choose to terminate their pregnancy if the Down syndrome test comes back positive.

Given that certain persons are pursuing a national renovation, Trump has a pointed question as to where it all ends. Consider that:

“The D.C. commissioners, charged by Congress with building the new city under the direction of the president, initially planned to import workers from Europe to meet their labor needs. However, response to recruitment was dismal and soon they turned to African Americans—both enslaved and free—to provide the bulk of labor that built the White House, the United States Capitol, and other early government buildings.”

Are we to anticipate they’re wanting to raze these as well?

Whoops! Forgot to provide the link to my source:
https://www.whitehousehistory.org/questions/did-slaves-build-the-white-house

Followed the link. I was expecting more. Perhaps it’s because I have so many good writers on my blog list, or maybe NRO has cocooned itself to the point that mediocrity is celebrated as “great satire”.

Far from the obvious lie that NRO “cacoons itself” it features pieces by thinkers as diverse as Andy McCarthy, Conrad Black, and V.D. Hanson.

We’ll all be happy to compare with your list.