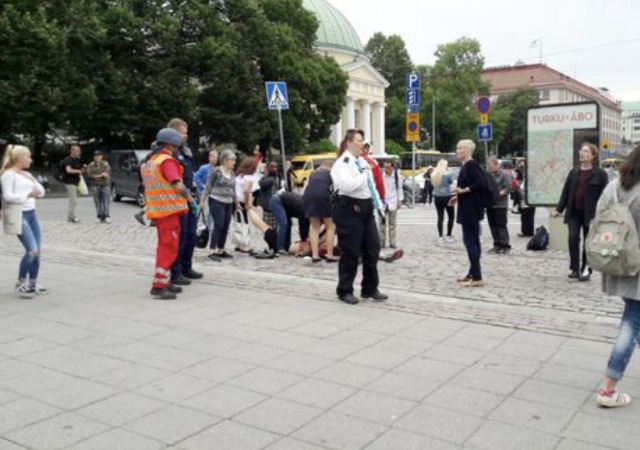 A day after a terrorist killed 13 people in Barcelona, a man has stabbed eight people in Turku, Finland, which is 104 miles west of Helinski. From YLE:

Eyewitnesses report hearing one or more gunshots, and seeing at least one person lying, apparently lifeless at Puutori. At least two people are reported injured, including at the Market Square, a few blocks away.

An Yle reporter at the scene says that the body on the ground at Puutori has been covered.

The police tweeted that authorities shot the suspect and took him into custody:

Several persons stabbed in central Turku. Police has shot at suspected perpetrator. One person is apprehendee

At a news conference, authorities said the suspect stabbed eight people. Two of the victims died. They also do not have a motive or can confirm if this was a terrorist attack:

The main takeaway from the #Finland #Turku press conference: police not calling it a terror attack, nor are they ruling it out.

Identity of perpetrator or deceased not confirmed yet. At the moment not investigated as terrorism, tho not ruled out completely #Turku

@paularisikko "I EMPHASIZE identity & motive of perpetrator NOT yet known" #Turku

Some people have uploaded images on social media. In this video, you can hear someone shouting Allahu Akbar.

First footage of a ‘stabbing attack with multiple injuries’ in Turku, Finland pic.twitter.com/5sMDf9Olo2

#Turku eyewitness Paiman Afzali describes a “young guy…running around city with a knife, ” others chasing him https://t.co/Wv2rNPFujP

Woman and baby believed to be among victims after 'knife rampage' in Finlandhttps://t.co/E8m97w5heA pic.twitter.com/ciQk9VG31H

*This is a developing story.

Didn’t know Trump was in Findland, sure somehow they will make this his fault.

Didn’t Trump mention the letters “F” and “T” in the same speech once, the same sentence, and maybe even the same breath?

The State-established Pro-Choice Church/Cult advises that a presumption of guilt based on overwhelming prejudice is in order.

One in Dusseldorf, too.

Lots of talk from the pols and the MSM about the setting of the latest attack.

But what they never talk about is the motivating ideology. Nothing about Islam nor how Jihad (holy war) is the Mohamed-commanded means of bringing the world to the heel of Islam.

This author, Bruce Bawer, nails it,

What they should do is import more refugees. The last thing they want at this point is to be called Islamophobic.

Must be because of the settlements.

Some people and their families are required to sacrifice more than their leaders do for social progress experimentation. The hope is that eventually there will be enlightenment for these new arrivals. It just takes time to sort things out and there will be unequal costs to society for its betterment. I wish I could be more sarcastic but there are a lot of dead bodies piling up from this Islamic Plague and the countries are as clueless to its causes as those during the Black Death.

Trump will be blamed. Dead white guys will be blamed. CNN will say that this incident was because they were inspired by what happened in Virginia. God, you gotta love how America is self destructing.

America really is self destructing. Our next president is likely to be to the left of Bernie Sanders.

Finnish Interior Minister Paula Risikko was on Finnish TV during a press briefing with senior law enforcement officials regarding today’s terrorist attacks. The propaganda that the govt. has been giving for the last few years is that everyone that comes into Finland is documented and they know everything about the ‘immigrants’ but it seems that having one in custody and one dead in a bag it seems that these particular ‘immigrants’ they know very little about. The Finnish people are not fooled by this nonsense. As always I am sure we will never know the motivation of these Islamist Jihadi Terrorists… Oh yeah, there was talk of how knives and axes are easy to acquire and need little skill to wield so there seemed to be thanks that the Islamists were not as organized as they have been in other recent Islamist terror attacks in Europe.

They consoled themselves with the Jews had it coming in Israel, now they are dumbfounded when the exact same behavior they find at their home country. It is muslims being muslims.

I used to fly into Helsinki often when I flew for Pan AM and you cannot find a nicer group of people. They have their problems because it is basically a closed society. My co-pilot and I would be approached at dinner by ladies of Finnland and ask if they could converse with us for a while. We were shocked and thought it was a scam or a prostitute ring but soon found them to be intelligent and honest in their request. Their government asked them to talk to outsiders to hear what the outside world was like and to discuss social issues with us. It was an interesting time. To think that a muslim would indiscriminately go after these people is just beyond comprehension. As draconian as it may be deportation to their homeland is the only answer. Remember back in the 50′ and 60’s when most muslims lived in their own lands? Do you remember any terror attacks in the West from them? Maybe in Israel or Lebanon but not much in the West. The time has come for them to be sent back home. I know I sound like a skinhead but I am truly at a loss as to what we need to do to return the world to sanity.