“This is not a peaceful protest” 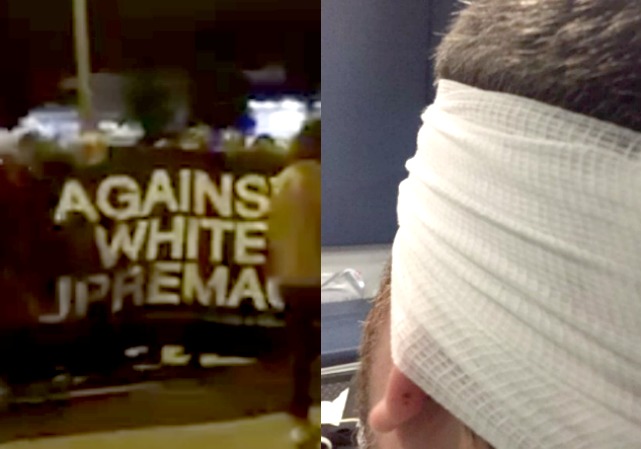 Our @CBS6 photojournalist assaulted in the head while shooting protests in Richmond. In the hospital getting stitches. Stop the VIOLENCE! pic.twitter.com/xGEWu0SWr4

We had a photojournalist attacked tonight by someone in the crowd that is marching. He had to get stitches. pic.twitter.com/lHM2kNetqE

Our photojournalist reported back that he got 4 staples after a protester hit him in the head. pic.twitter.com/bG5JRYfksJ

According to the local CBS affiliate:

The journalist, who was not working for the station at the time, was using his phone to record video of a large crowd of Monument Avenue protesters passing by The Camel, a live music venue, on West Broad Street.

“I can film whatever I want,” the CBS 6 staffer replied. “Get out of my face.”

At that point video showed the employee’s phone knocked out of his hands. Video then captured a protester hit the employee with what he described as a big stick.

Police officers responded and the photojournalist was transported via ambulance to the hospital, where he received four staples in his scalp. He was later released from the hospital.

“This is not a peaceful protest,” he wrote.

Additionally, a marked WTVR CBS 6 crew on the scene captured video of one protester who was concealing a baseball bat.

Where I am on this:

Best way to get rid of these loons is to refuse to give their publicity stunts any oxygen.

ONLY violence by PEACEFUL BLACK SUPREMACISTS and ANTI-FA FASCISTS !!
No body else around to blame !!

Ahhh, which? The two sides are not the same.

But CBS isn’t going to tell us that.

Journalists may be pressured to fit their stories to the narrative.

On scene journalist working for The Hill confirms that multiple police believe Charlottesville car crash was caused by driver fleeing from violent Antifa attacks. Subsequently deletes Tweets, likely after bosses told them to shut the fuck up and stop countering their narrative.LYING MSM
https://pbs.twimg.com/media/DHDt6RtV0AA3nBE?format=jpg

Note: there are TWO incidents of cars being attacked. The Lexus did not hit anybody, but the behavior of the crowd is significant. The police were commenting about the other car.

Legal question here, just how long are you supposed to let protestors attack your car with baseball bats and cola cans filled with cement before you are allowed to hit the gas and flee the scene?

My suspicion is that it was someone from the extremely tolerant leftists who were acting as safety marshals (sarcasm intended)–because if a CBS person was assaulted by the right, you would have read it in the article.

Hit Over the Head and the media still doesn’t get the picture.

You will notice it is violence for violence sake. No reason whatsoever.

Trump should urge law enforcement across the country to bar protesters from wearing masks. He could also urge Congress to make this federal law, and make it a violation to grab at or try to knock away anyone’s recording device.

Where the hell is Jeff Sessions?

… he must have ‘fallen into that stick’, the left is never violent… ask CBS news….

1) To be honest, seeing a Leftist network reporter get thumped by Leftists is somehow satisfying.
2) If they were rational, they would rethink their support for the Democrat thugs.
Being Leftist media, they will openly ban their reporters from even pretending to cover any violence by the Left.

“Best way to get rid of these loons is to refuse to give their publicity stunts any oxygen.”

Wrong. The best way to get rid of them is to arrest them for these crimes and put them in prison for a very long time.

Should have hit him harder – and repeatedly – until he woke up from his cultist stupor.

In all seriousness these antifa goons continue to go off unchecked. They are now eating their own. When will the media turn on these asshats and do some negative reporting on them?

Why is the press incapable of understanding that those people who show up to a rally wearing masks and such to hid their identity, do not wear these masks hoping the protest or whatever is peaceful? The only reason to wear masks and such is to hide your identity so that when the violence you start is recorded, no one will know who you are. If a riot starts, then those wearing masks should automatically be assumed to be the aggressors and the cause. Being that ANtifa routinely wears masks to these gatherings, the rest should be obvious to all but the media.

DiDN’T the ANTIFA fascists understand he was on their side?

But it was a MOSTLY peaceful protest, right?

I don’t agree to NOT cover them: these protests and protesters are newsworthy, and we should be informed about them.

The press could report on them, portraying these thugs as a vile, despicable, and reprehensible cadre of failures and losers.

The press could do that, but they won’t. The press themselves are a cadre of failures and losers, so there is a certain sympathy by the press for these rioters.