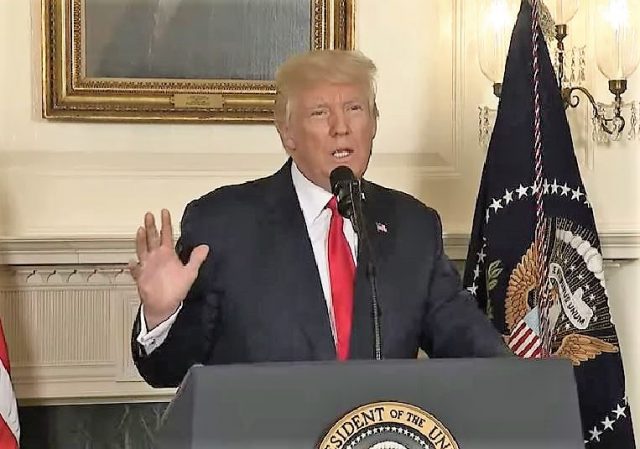 After a weekend of violence in Charlottesville, President Trump held a brief press conference to denounce neo-Nazis, the KKK, and white supremacists who instigated protests.

Trump announces DOJ Charlottesville investigation -"anyone acted criminally in this weekend's racist violence, you will be held accountable"

Trump: "I just met with FBI director [Wray] and [AG Sessions]. The DOJ has opened a civil rights investigation into the deadly car attack."

Unlike Saturday, Trump does NOT place blame on "many sides" for deadly violence

Trump drew an abundance of criticism for failing to outright denounce the alt-right and white supremacist groups whose protests in Charlottesville turned violent.

WAJ adds – Trump gave Antifa a pass in his statement. That’s a mistake. They have committed violence to shut down opposing speech throughout the country and long before Charlottesville. They should have been named as a threat to our liberty along with the other groups.

There is no appeasing the Left, don’t even try.

Here’s hoping the investigation shows how the mayor and governor set this perfect storm up .

But of course, the Media will have moved on to a new and more exciting mayhem by then.

Color supremacy is to one-child as [class] diversity is to selective-child. Both policies deny individual dignity and are evil.

As for neo-national socialists, judge people by the “content of their character”, and close the abortion chambers.

The left-right paradigm is a relative construct that varies by nation. In America, the communists, socialists, fascists/antifa, color supremacists, and [class] diversitists, are all left of center.

Oh good, a “civil rights investigation” … now the Obama holdovers who still infest the DOJ can mess things up properly.

Trump drew an abundance of criticism for failing to outright denounce the alt-right and white supremacist groups whose protests in Charlottesville turned violent.

Up next from the MSM- “Oh, now he says what we wanted him to say in the first place. Wait…that means Trump is a flip-flopper! He can’t make up his mind! Impeach him now!!”

Sure glad he cleared that up! I am sure the American press will get off his back, and stop smearing him and his supporters as racist (sarcasm X 1,000,000).

Next time hold the rally on a weekday when all the counter protesters are at work.

Did you read what you wrote? Work? Antifi is their work.

“WAJ adds – Trump gave Antifa a pass in his statement. That’s a mistake. They have committed violence to shut down opposing speech throughout the country and long before Charlottesville. They should have been named as a threat to our liberty along with the other groups.”

As far as the newspaper-reading public is concerned, ANTIFA does not exist. However, their role in this mess will be clarified, if the investigation is thorough.

There is a lot of video available, and chatter about some very odd connections among some of the players. We will have to wait and see if there really was astroturf and rent-a-rioters involved.

So what…… The media could care less what he said.
What ever he did say it was absolutely less than he should of said. Just ask the slimy media.

The resist media will continue to attack Trump, Trump voters and the Trump administration. Damn the truth just destroy Trump at every time you can!

Excuse me, but didn’t Trump condemn the violence not too long after the incident happened?

I am so sick of this nonsense and the way Trump folds. Valerie above should be one of his senior advisers. Hey Trump, hit back you dummy. The D’Rats never fold, nor should you.

Fine, so where are all the democrats lining up to denounce the antiFirstAmendmentcommunists and blm, etc, hate groups? Don’t hold your breath.
I’d call this bike lock wielded by Clanton attempted murder, but then again I’m not a lawyer. Video also at link of how 4 chan tracked the guy down because he was dressed in black with his face covered. Couple snips.

Eric Clanton, a former teacher at Diablo Valley College, was arrested by Berkeley police on Wednesday on suspicion of three counts of assault with a deadly weapon identified as a U-lock bike lock, and one of those assaults is alleged to have caused a significant injury.
—————-
Update, May 25, 4:04 p.m. BPD released a prepared statement Thursday about the Clanton arrest noting that the homicide team handled the case “Due to the severity of these felonious assaults.” BPD described the assaults as “violent”: “Some of these assaults were captured on video and viewed heavily on social media. In the assaults, Clanton was seen striking people in the head with a U shaped bicycle lock causing significant injuries to the victims.”

The Left’s tactic of stampeding all and sundry into apologizing for things they didn’t do—and have no responsibility for—is a bottomless pit. Apologize today; tomorrow, apologize for not apologizing in an approved manner; the day after, apologize for something else, with only a tenuous connection to the previous apology; ad infinitum.

From the start of the campaign season Trump has shown that he knows this perfectly well, and has not so far been willing to be lassoed into that mug’s game.

This is not the time to change tactics.