“Leaders who stand up and speak out against Trump now will be seen in history as heroes.” 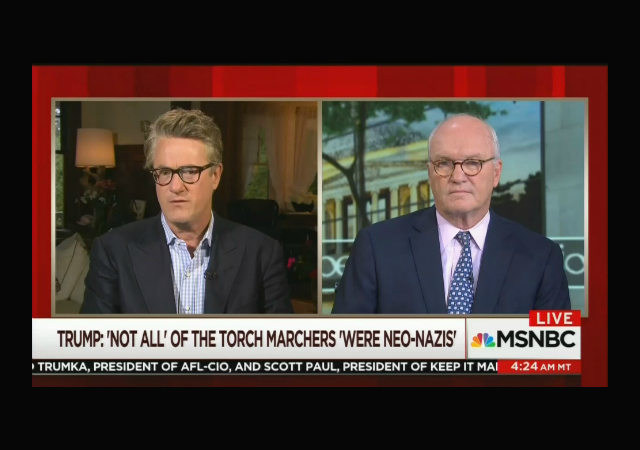 The entire first hour of today’s Morning Joe was one, long, hyperventilation over President Trump’s press conference of yesterday.

From Joe Scarborough to Willie Geist, Nicolle Wallace to Jon Meacham, Mike Barnicle to Michael Steele, the crew outdid themselves with apocalyptic condemnations of the president.

Below, we’ve noted some of the lowlights, but have a look at the montage for the full frontal assault.

On the eve of Trump’s renegotiation with China and NAFTA members – a fake scandal. Who would have thought? Who could have predicted it?

The sanctimony reeks these days, but particularly from the people that pretend not to know that hate exists from more than one direction. They should all look at their own roles, but won’t. They are too busy sewing seeds of disunity.

These clowns are in a corrupt cult.
Don’t ever expect a narcissist to admit they’re an ignoramuses. Especially if they’re getting paid well for it.

We have more to worry about from ‘insider’ betrayals by McConnell, Ryan, McMaster, McCain, Gary Cohn and the likes of them.

It has McConnell and Ryan scurrying for cover, like the rats they are.

notamemberofanyorganizedpolicital in reply to TheFineReport.com. | August 16, 2017 at 6:38 pm

I hope the both scurry right into a BIG RAT TRAP!

The mantra of the Left is “we can never do enough” for this or that issue. Trump’s “sin” was not selectively “doing enough” for the Left’s yardstick of requirement. That the GOPe is willing to pile on assures me that “the fix is in”. Here is the chance for the crony capitalist “country-club” republicans to purge the party of this unwanted leader and his unwashed followers. The GOPe has become comfortable wearing their chains of servitude to the establishment. Maybe the GOPe is betting that being the perpetual underclass will get them affirmative action minority status with the Left.

Rules for Radicals keeps coming in handy for them
11. “If you push a negative hard enough, it will push through and become a positive.” Violence from the other side can win the public to your side because the public sympathizes with the underdog.

There was no hand-wringing, pearl-clutching or pants-wetting, by the liberal journalists and politicians in this country, when BLM, the Antifa and Occupy goons were beating people and burning and otherwise destroying property. But, let one group of white nationalists defend themselves from the liberal storm troopers and suddenly it is the end of the world.

It is interesting to watch the Liberal Progressives so thoroughly embrace the violent thug tactics of Communist, Fascist and NAZI regimes while calling those, with whom they disagree, Fascists and NAZIs. We have all now officially traveled through the looking glass.

I posted this comment elsewhere, before this article appeared.
So, let me repeat it:
The SPLC , as per Breitbart yesterday, says that one of the chief organizers of the Righties in the Charlottesville-riot, is an individual that had been a chief organizer of the Occupy Wallstreet movement, and had been an Obama -booster in the ’14-election
The fact that this claim is made by the SPLC, is, of course, what
gives this story additional weight.
If it is factual, and I hope we will find out once and for all, the Left will have to shut up and crawl into a corner and be very, very quiet.

If it is factual, the Left will continue to blame the Right. Remember, if a lie is repeated often enough, loud enough, by enough people, a large percentage of the population will believe it to be true!

“Leaders who stand up and speak out against Trump now will be seen in history as grandstanders.” FIFY

With the Russian collusion case looking worse by the day, this is the new scandal the left is using to attack Trump and RINOs like McConnell, Ryan and Rubio are more than happy to play along.

President Trump represents the diversity of Americans. Over 300 million of us. He rejects the left’s establishment of institutional [class] diversity (e.g. racism, sexism, etc.), a resurrection of the DNC’s traditional bigotry.

As for the departing CEO’s……perhaps the Order of Lenin?

Does little fluffy joey not realize his silly rants only serve to make him look like a petulant sandbox bully?
The lead in to his vapid show with his bleach blond bimbette should be empty, narcissism practiced here at our little show about nothing.
How much does this nitwit get paid to blow his hot fetid air into our already overheated universe?

Well we know you are Joe, but what are we?

The only way this madness will end for sure is if there is a way to muzzle the TV media elites running the morning/evening news – aka main stream media. As it stands, they can say or create any narratives they wish to without any formidable resistance. And that is scary for all of us who are part of this republic.