Remembering the Victims of Palestinian Terror on Israel Memorial Day

Remembering the Victims of Palestinian Terror on Israel Memorial Day 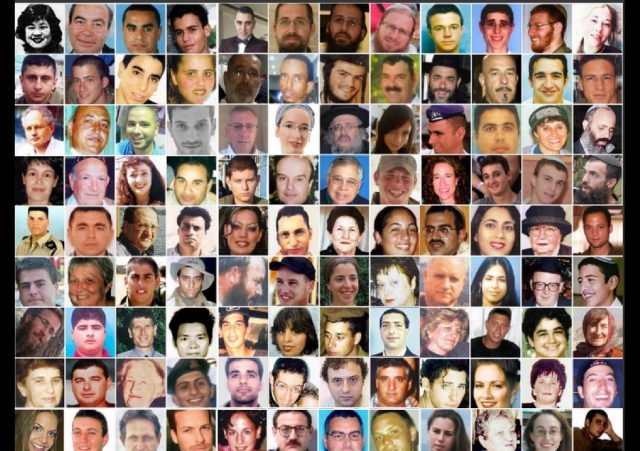 Today is Yom Hazikaron, Israel’s Memorial Day in which Israelis stop to remember the 23,169 fallen soldiers and victims of terror.

A siren was heard throughout the country, and people came to a standstill on highways, in markets, and elsewhere to stand in silence.

Today, among those 23,169, we remember Edward Joffe and Leon Kanner, killed in the February 1969 Supersol supermarket bombing in Jerusalem carried out by Rasmea Odeh and her co-conspirators:

I thought it would not take long to list the other victims of Palestinian terror we have written about at Legal Insurrection. As I started to go through our past posts, I realized how many terror attacks we had covered over the past 8 years.

Go through this list and you will understand why actual Israeli Jews do not approach the “peace process” with the same naïveté and wishful thinking of left wing American Jews. That is why left-wing Israeli political parties do so poorly, and why the leftist Haaretz newspaper has extensive influence in the U.S. but almost no Israeli readership.

Here is the list, which is not necessarily complete, of the terror attacks we have covered. We remember:

1970 – Members of the Biton family killed in a 1970 rocket attack on a school bus near the Lebanese border.

2001 – Malka (Malki) Roth and the other victims of the Sbarro Pizzeria Massacre 2001, whose mastermind Ahlam Tamimi Jordan refuses to extradite to the U.S.

2001 – The 21 victims of the June 2001 Dolphinarium disco suicide bombing, including Simona Rudina.

2003 – Tal Kehrmann and the other 16 victims of the 2003 Haifa Bus 37 Suicide Bombing, including many Druse students.

2010 – American tourist Kristine Luken, stabbed to death in the forest near Jerusalem while hiking.

2011 – Infant Hadas Fogel stabbed to death in her crib by Palestinian terrorists who also killed four members of her family in 2011.

2015 – Rabbi Yaakov Litman, Hadar Buchris and an American yeshiva student Ezra Schwartz, in a week in November 2015 that saw One Wedding, Two Funerals, and a Stabbing

2017 – Hannah Bladon, a British exchange student stabbed to death on the Jerusalem light rail in April 2017.

Which reminds me of my interview with an Israeli survivor of the 1970 school bus attack near the Lebanese border, Israel’s Revenge Is That “We Are Still Here”

Near the start of our trip, we visited Moshav Avivim on the Lebanese border, where we met Shimon Biton, a survivor of the 1970 bazooka attack on a school bus by the Popular Front for the Liberation of Palestine.

Biton, who was six and one-half years old, lost his father in the attack, and himself was shot point blank range by the terrorists when they realized he survived the bazooka attack.  Ten days before we met Biton, he was reunited for the first time in 45 years with the nurse who helped save him.

When we asked whether he ever wanted revenge, Biton told us that the revenge was that “we are still here and building for another 70 families.”

As this post is going live, it’s already evening in Israel and celebrations have started for Israel’s 69th Independence Day.

Hmmm..Sean Spicer announces Mahmoud Abbas is coming to the WH on Wednesday.

2711 people around the world each studied one page of the Talmud today, so that between them the entire work was completed. Each person was assigned the name of a fallen soldier to keep in mind while studying their page. Mine was Private Tzvi (Hersh Mendel) Hovan, infantry, son of Malka and Reuven, who fell on June 6 1967 at the age of 19. He’d have been 69 now. He’s buried at the military cemetery in Haifa.

I’ve offered up prayers for both Tzvi Hovan and Hersh Mendel. Your description leaves a little to be desired but God will know.

All I know about him is on the page I linked to, which I was sent from the Talmud study project. I never heard of him before I volunteered to study a page in a serviceman’s memory. The page gives his first name as Tzvi, which usually goes with the nickname Hersh or Hershel, but in parens it says Hersh Mendel, so if the information is accurate then that’s what people called him. I wonder, though, whether his full name might not have been Tzvi Menachem, since Mendel is usually a nickname for Menachem.

Unfortunately several suicide bombings are not on your list.
In 1994 a few months after Arafat signed the Oslo accords there was a car bombing in Afula.