My first day in Haifa. 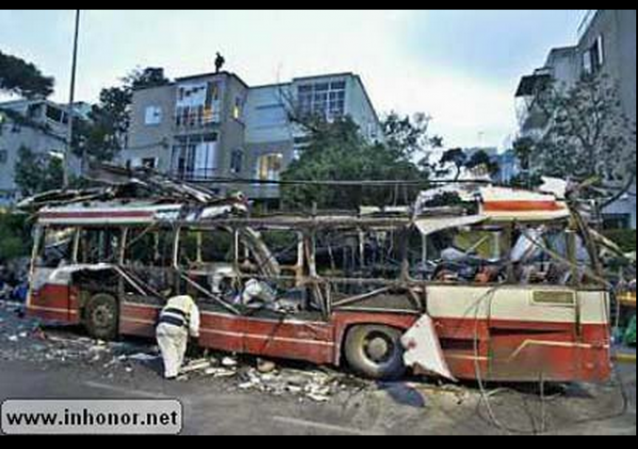 In Israel, you are never far away from terror or the memory of terror. I learned that by chance tonight.

We arrived in Israel late afternoon yesterday, May 23, 2015.  Today was planned as a rest day to try to adjust to the 7-hour time difference.

From the airport we headed directly for Haifa, the northernmost big city in Israel, with a population just under 300,000.  It is a very mixed city, both ethnically and religiously. 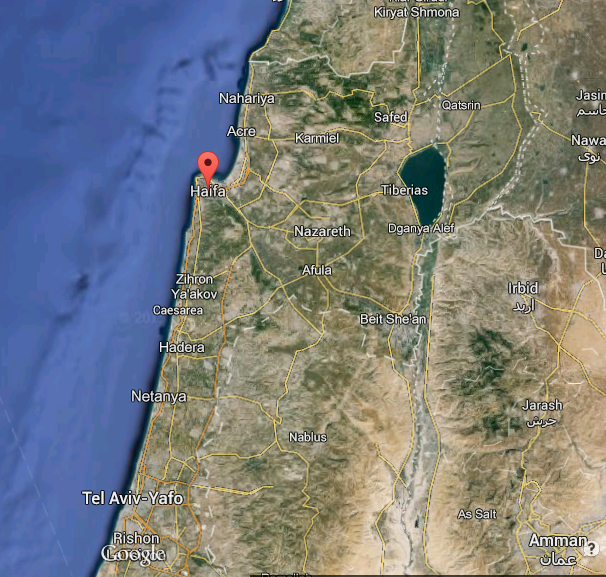 We started the day with the classic Israeli Shakshuka breakfast at the Villa Carmel, where we are staying: 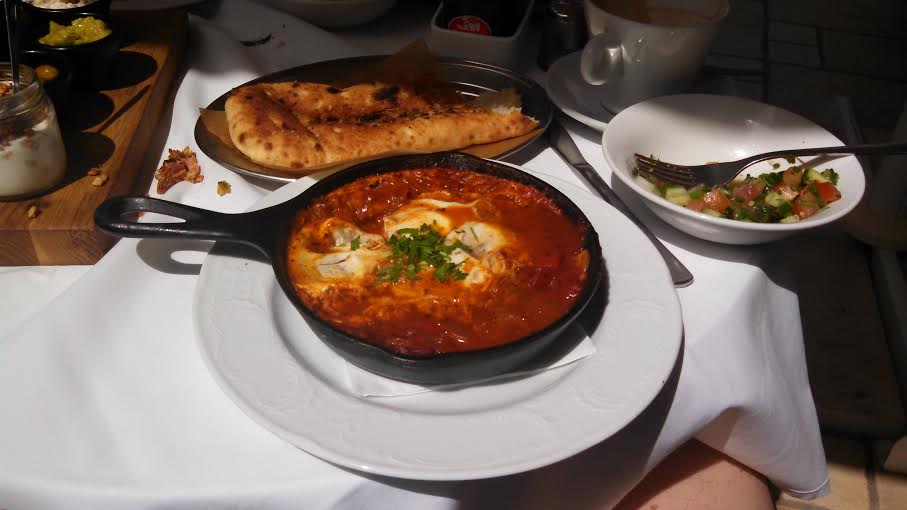 After breakfast we walked through a playground, filled with children (and dogs!) enjoying the holiday with parents and grandparents. I almost took a photo (the scene was so peaceful in a country known for war) but didn’t. I later regretted that.

Haifa is best known in tourist circles as the home of the Bahá’í Gardens:

The Bahá’í Gardens in Haifa comprise a staircase of nineteen terraces extending all the way up the northern slope of Mount Carmel. The geometry of the complex is built around the axis connecting it with the City of ‘Akko, which also has great historical and sacred significance for Bahá’ís. At its heart stands the golden-domed Shrine of the Báb, which is the resting place of the Prophet-Herald of the Bahá’í Faith.

Much of Haifa was closed today for the Jewish Holiday of Shavuot:

The Torah was given by G‑d to the Jewish people on Mount Sinai more than 3300 years ago. Every year on the holiday of Shavuot we renew our acceptance of G‑d’s gift, and G‑d “re-gives” the Torah.

The word Shavuot means “weeks.” It marks the completion of the seven-week counting period between Passover and Shavuot.

The Bahai Gardens were closed today, but not because of Shavuot. Today is a Bahá’í holy day.

We did get a view, nonetheless, from Ben Gurion Street in the “German Colony” section of Haifa. 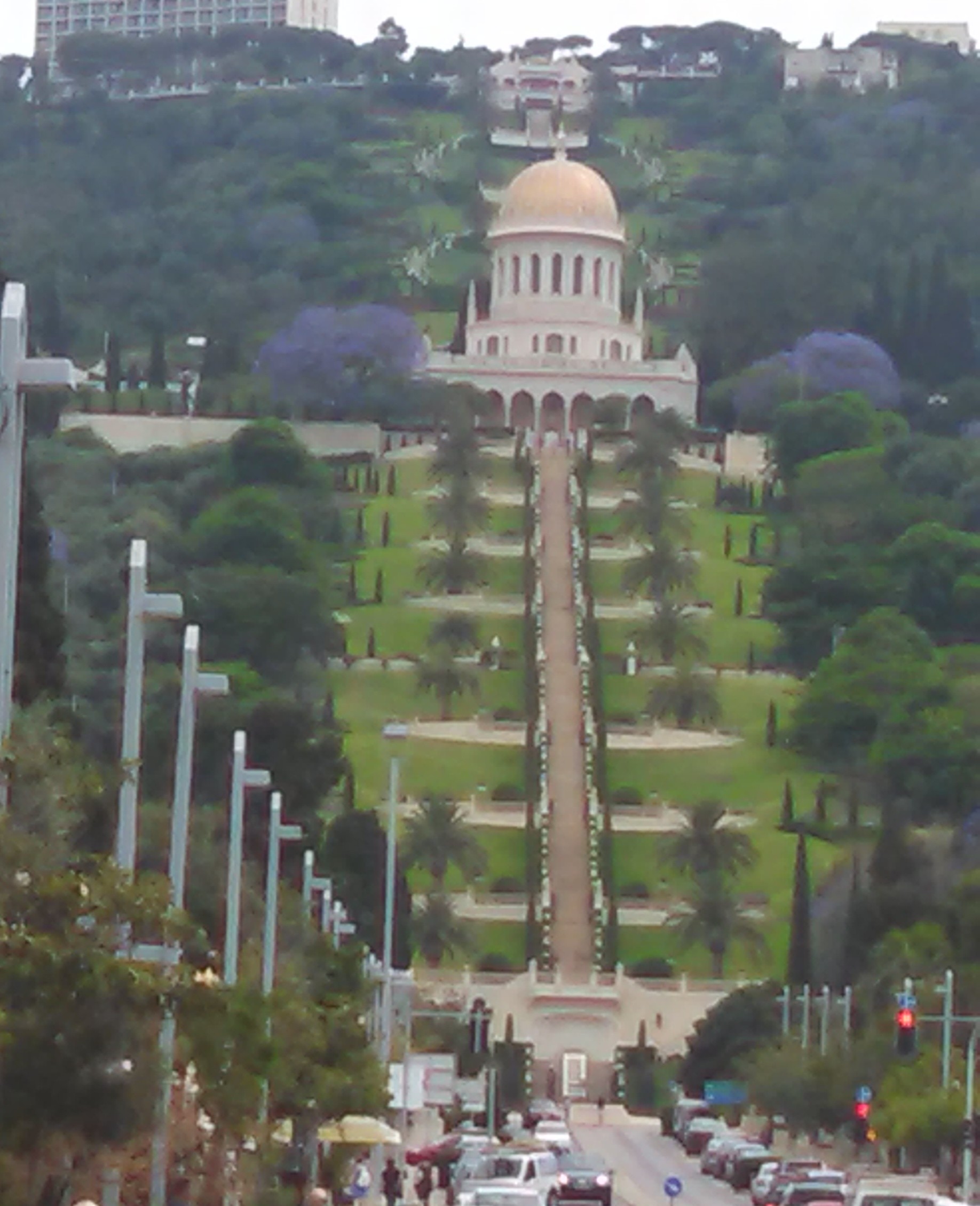 We spent much of the day at the Haifa beach, which was very crowded because of the holiday. There were many families, both Jewish and Muslim, along the lengthy boardwalk and path, and all the restaurants were open. 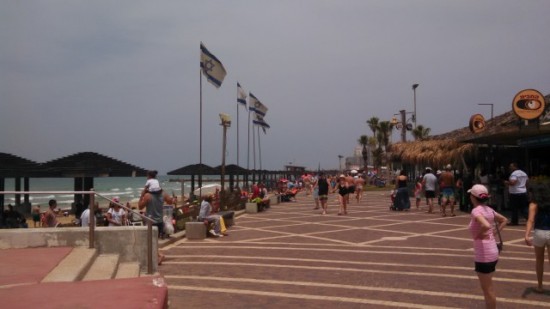 The wife enjoyed it.  (No selfie sticks were harmed in the taking of this photo.) 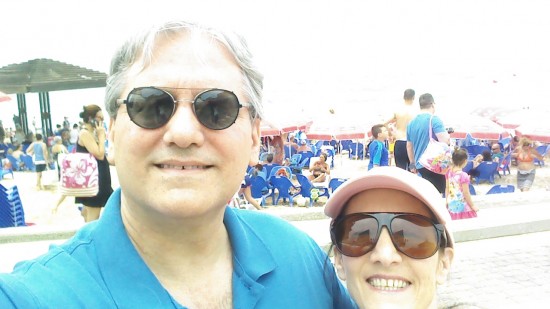 We had dinner tonight with an Israeli writer in the area surrounding our hotel, which is fairly residential. While walking back to the hotel, she pointed out the bus stop we would take to the University of Haifa. The bus stop was just around the corner from our hotel. It is a bus line used not only by the university, but many schools.

We had already walked past it several times, but didn’t notice the writing (we don’t read Hebrew) or the 17 indentations in the wall

It is a memorial for the 17 people, mostly students, who were killed in the March 5, 2003 suicide bombing of Bus 37 — the same bus line we would take to the University of Haifa.

As with my prior trips, this was an opportunity to learn a piece of history just by walking.

The Bus 37 bombing was part of the Second Intifada suicide bombing campaign in which almost 1000 Israeli civilians would die, until the building of the security barrier and aggressive Israeli military action put a stop to it.

But not before the passengers of bus 37 would die.

Seventeen people were killed and 53 wounded in a suicide bombing of an Egged bus No. 37 in the Carmel section of Haifa, en route to Haifa University. The blast, which took place on the city’s main Moriah Boulevard near the Carmel Center, turned the bus into a charred wreck and scattered bodies along the road. The bus driver, a Christian Arab from Shfaram, was moderately injured.

Police said the bomb was laden with metal shrapnel in order to maximize the number of injuries and strapped to the bomber’s body.

This was the first suicide bombing in two months, following the bombing in the Neve Sha’anan neighborhood in Tel-Aviv on January 5, in which 23 people were killed.

Hamas spokesman Abdel Aziz Rantisi praised the attack but did not claim responsibility. The suicide bomber has been identified as Mahmoud Amadan Salim Kawasme, 20, member of Hamas and a computer student from the Hebron Polytechnic Institute. A letter found on his body praised the 9/11 attacks on the Twin Towers:

“One of the miracles of the Koran – We present it to the Muslims, Jews and Christians

Here is a list of the victims from the MFA website, which also has links to their individual pages:

Here are the faces (image via Israeli Grouch): 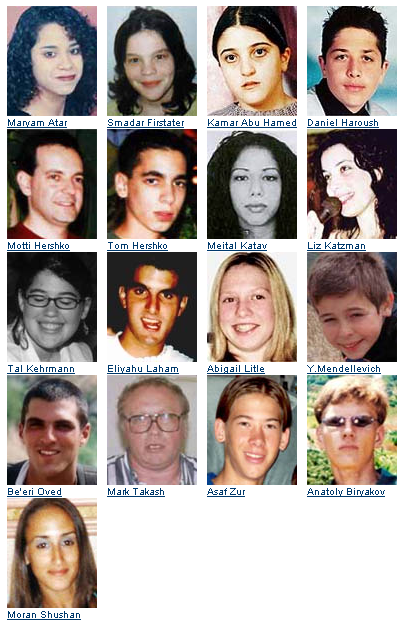 Photos of the bombing aftermath, including the Featured Image, are available here.

Here is video, some of it quite graphic:

The mother of the suicide bomber praised the attack:

The mother of the suicide bomber “Um Shadi”, praised her son’s deeds, and
refused to act as if in mourning. The following is a translation of an
article published on the Islamic Jihad’s official website on March 6, 2003:

“The women swarmed around the Um Shadi, mother of Mahmoud Hamdan Kwasma, who
carried out the suicide bombing on Wednesday in Haifa.They had come in order
to praise her for the death of her son in the service of Allah.

In the Kwasma household, situated on the first floor of a building in the
Alsheikh neighborhood in the city of Hebron, the Um Shadi served sweet
coffee and ‘Knaffe’ (a sweet pastry eaten at celebrations)The Um Shadi was
not dressed in the ritual black dress of mourning, and did not serve bitter
coffee as is customary on solemn occasions. She received the guests who had
come to “mourn” holding, with a mixture of pride and matriarchal pain, the
picture of her son clad in a red head dress. The Um Shadi addressed the
journalists and quoted a passage from the Koran: ‘Do not treat those who
have died for the path of Allah as dead, but rather as living with Allah and
being fed by his hand. She added ‘my son is a Shahid (martyr), my son is
alive and being nurtured [by Allah] and he is not dead’. The Um Shadi went
on to say ‘I am proud of my son’s deed, we must fight for our faith and not
for our nation (the Palestinian nation).”

The masterminds of the attack were arrested, but released in the 2011 prisoner exchange for Israeli solder Gilad Shalit:

Fadi Muhammad al-Jabaa, sentenced to 18 life sentences for plotting the suicide bombing of a Haifa bus in 2003, in which 17 passengers were murdered, will be released and deported to Gaza. The list also includes Maedh Abu Sharakh, also convicted of plotting the Haifa bus bombing.

Here is what the bus stop looked like after the bombing: 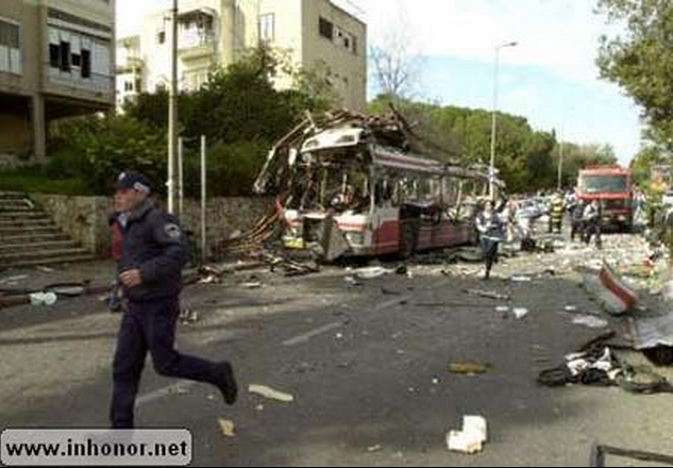 The bus stop has been moved just a dozen yards up the street, and the wall where the shattered bus is shown now is the memorial, with the 17 indentations in the wall.  I can’t read the Hebrew, but perhaps someone can translate in the comments for me, but most of it appears to be the names of the victims: 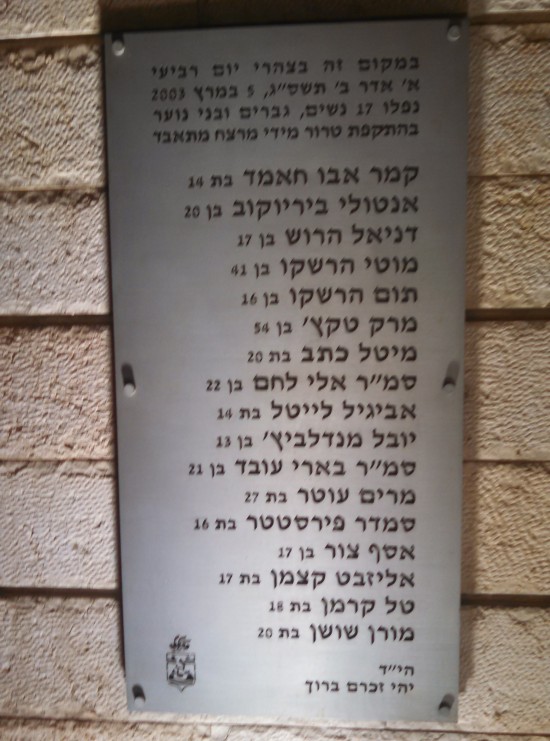 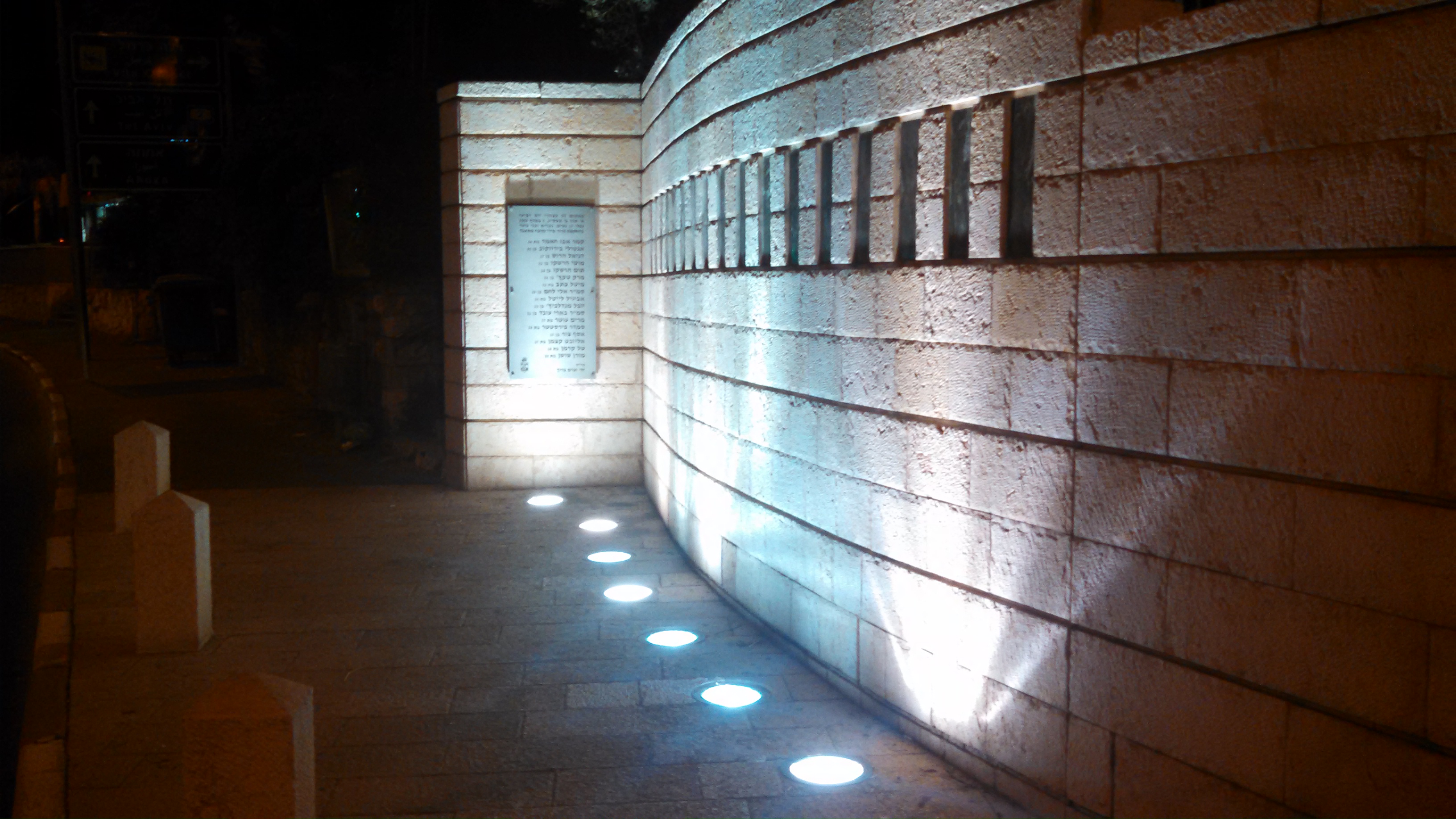 Professional photos of the memorial, by the designing architect, are here.

The family of Tal Kehrmann remembered the 10th anniversary in their own way:

A dad still grieving for the daughter murdered in the 2003 terror attack on a bus in Haifa is asking that a camel be colored in her memory.

Ron Kehrmann’s daughter Tal was just “17 years and 9 months old,” a high school senior, when she and 16 others were murdered in the March 5, 2003 suicide bombing on Haifa bus #37.

“Tal loved camels,” Kehrmann wrote in a letter to Arutz Sheva. “In Tal’s diary we found the camel she had drawn, but not colored.”

In her memory, the heartbroken father decided to hold a “Color Tal’s Camel” memorial event.

“This year we will mark her 10th Memorial Day, and my goal is to post at least 10,000 camels on her website,” Kehrmann explained.

He asked that readers “color Tal’s camel on your computer or by hand, do not hesitate to be as creative as you can be. Please bear in mind that Tal was a very happy teenager, very creative with extraordinary ideas.” 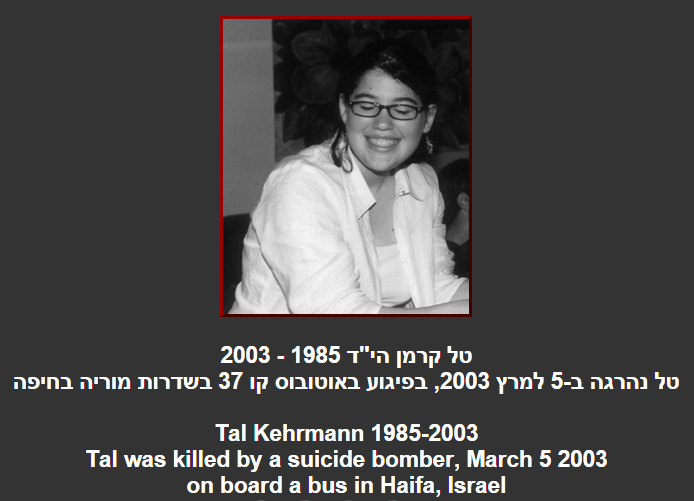 Remember the playground we walked through after breakfast but didn’t photograph? In researching this post I learned it was dedicated to the memory of those killed in the bus bombing:

Asaf Zur, almost 17 years old, on his way back from school was killed on spot.

Meital Katav, 20 years old, was on her way back from work and was killed on spot.

they both lived in the same neighborhood, their parents built a playground in their memory, in the playground there’s a monumnet commemorating the two.

Such is life in Israel. It goes on.

And tomorrow — Memorial Day in the United States — we head north, to the Lebanese border, and points in between.

Celebrated. No words to describe the depravity of these animals

The Israelis build a park for children to play in, and their parents to gather to watch them, in memory of their lost children.

If there’s anything the Islamists built to commemorate the murderer bomber, it’s a new tunnel to employ so more bombers can murder more children.

Shakshuka? Isn’t a Russian word for a rocket?

At least one of the digestive kind…

Here is the translation for the sign: “In this place, Wednesday afternoon (date on the Hebrew calendar and English date) fell 17 women, men, and young people in a terror attack at the hands of a suicide murderer ( at the bottom is the phrase May their memories be blessed”

I prefer the Israeli term suicide murderer over suicide bomber. The term “fallen” is used for both victims of terrorism and IDF casualties, jointly honored on Israel’s Memorial Day.

Important to note the several Arab Israelis among the murdered. This was not uncommon during the attacks in Haifa between 2000-2007, nearly all of them I recall included Arabs among the dead and wounded, given how mixed a city Haifa is. I recall one notorious case was a suicide attack on a cafe jointly owned by an Israeli Jew and Israeli Arab.

The attacks on the innocent continue unabated…now it’s the so called ‘car intifada’ and the knifings. Two young teens just attacked outside Old City in Jerusalem.

Thank you for the translation. “Suicide Murderer” excellent way to put it.

One slight addendum. The acronym “הי”ד”, right above the phrase meaning “may their memory be blessed” is usually meant to represent “May G-d avenge their blood”.

You cannot negotiate with barbarians or make a rational peace with them. You can only convince them to leave you alone with enough force, or watch them overrun you.

Israel is not willing to do the first due to their religious ethics, and so the conflict goes on. Those who believe they can wish it away are the most deluded of all.

These are the people that Pope Francis wants to honor with their very own homeland…….(launching pad for more terror).

Leftist Democrats blew up over an imaginary link they created between a derailed speeding Amtrak train which killed 8 and supposed underfunding of Amtrak.

I wonder if they would’ve linked these 17 deaths of Haifa Bus 37 to the underfunding of Israel’s incomplete security fence at the time?

I remember when this bus came to San Francisco one year. I wasn’t sure how or who managed to ship it there to SF.

We arrived in Israel late afternoon yesterday, May 23, 2015. Today was planned as a rest day to try to adjust to the 7-hour time difference.

Did you know before that it was the Jewish Holiday of Shavuot?