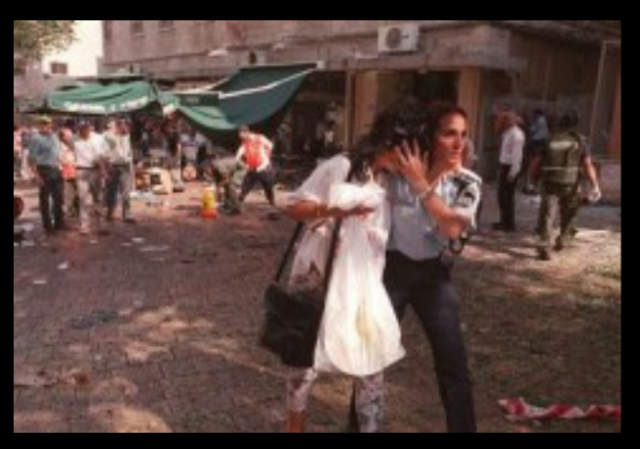 The list of Palestinian suicide bombings targeting civilians is long and bloody, and dates back at least to 1989.

Documenting the pathology of Palestinian terror attacks, including suicide attacks, and telling the stories of the victims, has become a priority for me. I have previously covered, among others, the suicide bombings at Sbarro Pizzeria in Jerusalem, and Dolphinarium Disco and Mike’s Place bar in Tel Aviv, and Bus 37 in Haifa.

The NY Times reported at the time:

Three suicide bombers evidently acting in concert set off bombs on a popular shopping promenade in Jerusalem today, killing four passers-by and themselves and dealing a brutal new blow to the reeling Israeli-Palestinian peace.

The three explosions followed in quick succession at about 3:10 P.M. on Ben Yehuda Street, a shady pedestrian thoroughfare in West Jerusalem lined with boutiques and outdoor cafes, and packed with Israelis and foreign tourists.

Officials said eight people were severely wounded, and about 180 others were also hurt. Hospital officials said the toll and damage were limited by the fact that the bombers set off their charges in the open. An attack five weeks ago by two suicide bombers in Jerusalem’s Mahane Yehuda vegetable market, a more constricted and more densely packed place, took the lives of 15 victims….

The three bombers, one or two of whom were said by some witnesses to have been dressed as women, detonated their explosives within sight of each other, just as the two bombers did in the vegetable market attack. And an offshoot of the Islamic Hamas movement calling itself the ”Martyrs’ Brigade for Freeing Prisoners” took responsibility for both attacks, warning of more to come if Israel did not meet its demands to release Palestinian prisoners….

The bombs consisted of about five pounds of explosive each packed inside nuts and bolts. The police said the shrapnel came ”from the same package” as that used in July, further supporting a link between the two attacks.

An eyewitness described the scene (audio via CNN): 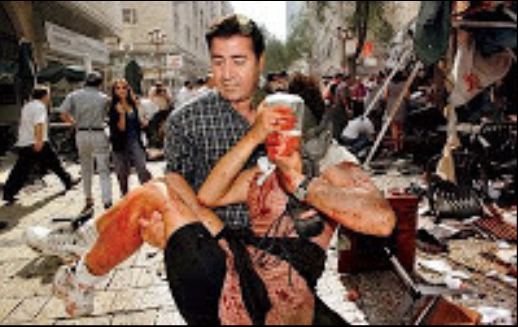 Four Israelis were killed, as CNN reported at the time:

Seven people, including three girls, were killed and nearly 200 other people were injured when three nail-laden bombs rocked a pedestrian mall in downtown Jerusalem Thursday.

The blasts were set off by three suicide bombers, who were among the dead. The other victims included three girls, aged 12, 14 and 15, and an unidentified man….

Hundreds of people were packed into the Ben Yehuda Street mall at about 3 p.m. local time (8 a.m. EDT) when the explosions went off, Israel radio reported.

“It literally destroyed the center of the mall,” said Pierre Klochendler, a CNN producer at the scene.

The blasts shattered windows, knocked over cafe chairs and ripped down awnings along the wide pedestrian walkway. Blood spattered the pavement and rescue workers rushed victims away on stretchers. Body parts were covered by sheets.

A security guard, who identified himself only as Yaakov, said he saw “people fly through the air.” 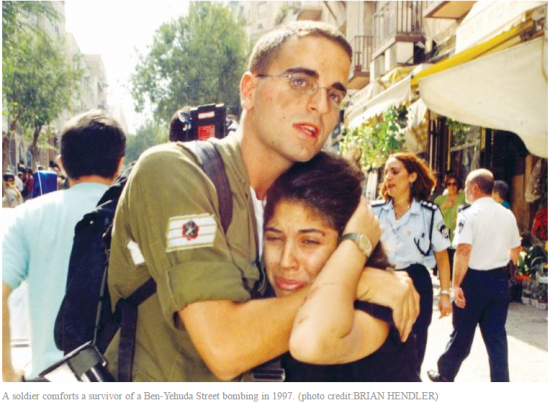 Here is AP archive video of the 1997 bombing:

The December 2001 bombing during the Second Intifada was particularly deadly, as The Telegraph reported at the time, Suicide bombers kill eight and injure 170 in Jerusalem:

AT least eight people were killed and more than 170 injured last night when two suicide bombers blew themselves up in a busy Jerusalem street.
As the casualties were being taken to hospital, a car bomb went off 50 yards away.
Mickey Levy, the Jerusalem police chief, said the first explosions, on Ben Yehuda street, had probably been caused by two Palestinian suicide bombers. A witness said he had seen a boy of about 10 lying dead….

Witnesses said the car bomb exploded as about 20 people were trying to move the vehicle because it was blocking the road. Ben Yehuda is full of restaurants and shops which are full of young people at night.

Michael Perry, 37, who ran out of a bar after hearing the first two blasts, said: “There were lots of limbs and dead bodies. I saw three dead and what looked like the remains of the suicide bomber.”

Another witness, who had been sitting at a cafe, said: “It was a huge explosion. People flew into the air and there are many covered in blood.”

Here is Ben Yehuda street on a normal day:

and when it’s party time:

Some people love death, others love life. I’m convinced that those who love life will win.

[Featured Image via BBC Watch][H/t Gabriel Rosenbert on Twitter for reminding me of this bombing.]

“Some people love death, others love life. I’m convinced that those who love life will win.”

I’m convinced of this, as well, Professor Jacobson. Despite the many incidents and issues pointing otherwise, that there is still this struggle for life indicates to me that in the end it wins!

I’m convinced that most people fondly desire to be left alone to live and love and raise families.

It’s a damn shame that some people cannot allow that to happen. Life would be so simple…