From Nice to Berlin to Jerusalem, terrorists have graduated from car rammings to trucks 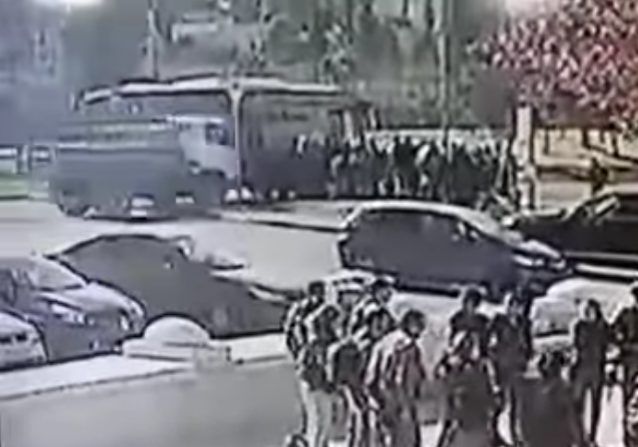 We previously documented how the Palestinian terror tactic of car rammings had migrated to Europe in the form of truck rammings, which killed 84 people in Nice, France, and more recently, 12 people in Berlin, Germany.

Now the truck rammings that killed so many in Nice and Berlin, have come to Israel.

Four people have been killed when a Palestinian terrorist rammed a truck into a group of Israeli officer cadets on an educational tour waiting to board a bus in a parking area in Jerusalem. The driver drove the truck back and forth over the bodies.

The attack comes as Palestinian leaders have ramped up incitement in advance of Donald Trump taking office, with threats and predictions of violence from the highest levels.

Four IDF soldiers were killed and 13 wounded after an industrial truck driven by a terrorist, rammed into a group of people adjacent to the Armon Hanatziv promenade in Jerusalem on Sunday afternoon.

Among the fatalities were three female soldiers and one male in their 20s. The terrorist was shot dead by security personnel at the scene….

Speaking to the press minutes after the attack, Police Commissioner, Insp.- Gen. Roni Alsheich, identified the attacker as a resident of east Jerusalem, with an Israeli driver’s license, driving a large truck with an Israeli license plate.

Fadi al-Qanbar was identified as the killer. A Palestinian website published this photo of him: 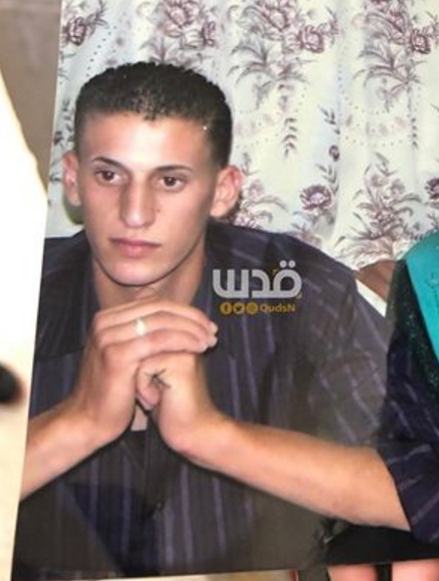 That same website published this photo of the daughter of the “martyr” hearing of his “execution”: 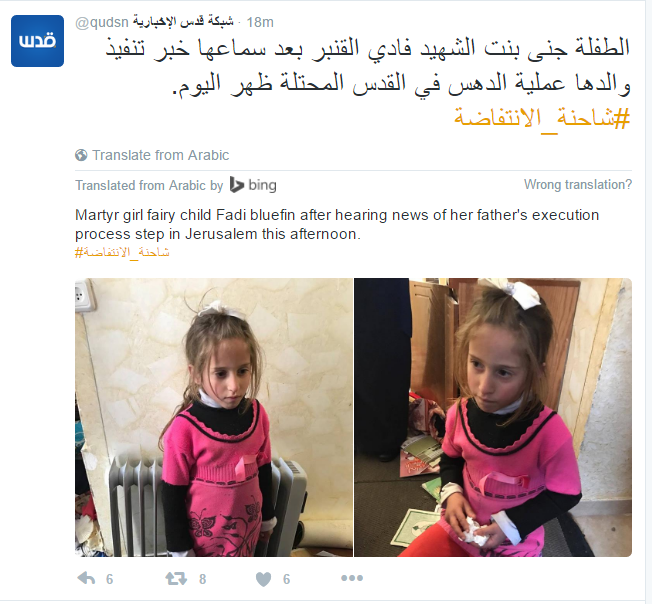 And these images of candy being handed out in celebration in Gaza: 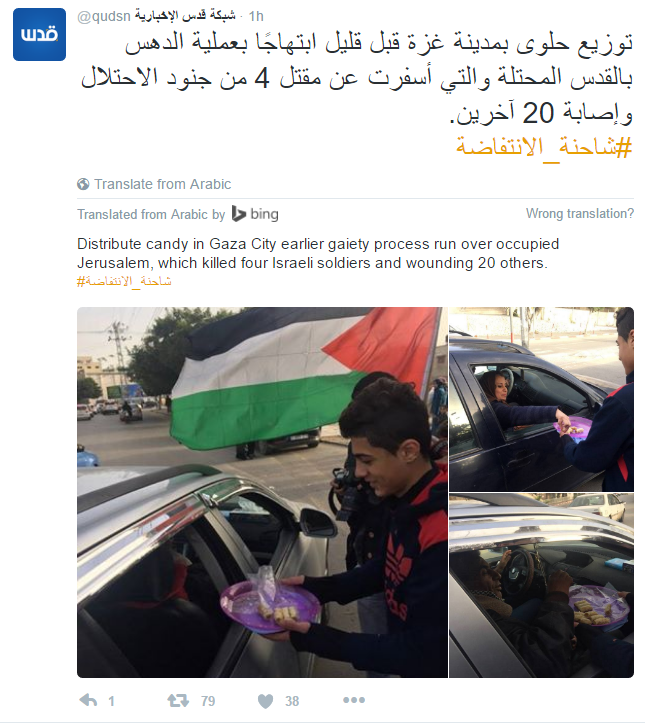 The Jerusalem Post reports that soldiers were hesitant to open fire as they saw the truck approaching because of the highly publicized trial of a soldier in Hebron for shooting a wounded attacker, Man who shot Jerusalem terrorist: Soldiers hesitated to shoot because of Elor Azaria:

The military trainer that shot and killed the terrorist who rammed his truck into a group of people killing four in Jerusalem’s Armon Hanatziv neighborhood on Sunday said that IDF soldiers on the scene were hesitant to shoot due in part to the conviction of IDF soldier Elor Azaria on manslaughter charges.

The military trainer, identifying himself as Eitan, told Army Radio that “after rolling back on the grass, I saw the truck go in reverse, and then I realized that it wasn’t an accident.”…

He claimed that the soldiers who were on the scene were hesitant to shoot at the truck that slammed into the group of people. The fact that Elor Azaria was convicted of manslaughter for shooting a wounded terrorist was the reason for this hesitation, according to Eitan.

“There was hesitation to open fire. I have no doubt that this was a significant factor, because all they tell them recently is to be careful. It could be that a few minutes less of hesitation and the situation would have been better,” he added.

(added) Others deny there was a hesitation to shoot, The Times of Israel reports:

IDF spokesman Moti Almoz said, according to Israel Radio there was no indication and no reports that the soldiers hesitated to shoot for fear of what has been dubbed the “Elor Azaria effect,” a reference to the recent conviction for manslaughter of the IDF soldier who shot dead a wounded and incapacitated Palestinian attacker in Hebron last march. The assailant and an accomplice had earlier stabbed another soldier, wounding him lightly.

Following the attack, the army released a video of one of the two cadets who opened fire at the terrorist, detailing how he responded to the truck-ramming. The soldier, who serves in an intelligence unit, speaks with his back to the camera and could only be identified by his first initial, T., due to the sensitive nature of his position.

Hamas spokesman Hazzem Qassem wrote the following on his Facebook, The Times of Israel reports:

“The continuous operations in the West Bank and Jerusalem prove that the Jerusalem Intifada is not an isolated event, but rather a decision by the Palestinian people to revolut until it attains its freedom and liberation from the Israeli occupation.”

He adds: “These operations demonstrate that all attempts to bypass the resistance or to thwart it will fail every time.”

As they do after each & every terror attack,Palestinians give out candy celebrating today's ramming attack in Jeruaslem (4 dead, 15 wounded) pic.twitter.com/Zbc6H153vo

More celebrations after the #Jerusalem attack, this time from palestinians in village of Jabul Mukabar (h/t: @FalafelBalls) pic.twitter.com/7VfoFzqmI1

And the terrorists sister is praising his “martyrdom”:

The sister of a Palestinian terrorist who rammed a truck into a group of soldiers in southern Jerusalem Sunday, killing four and wounding another 15, said the family was “thankful” for the attack and called her brother’s death “the most beautiful martyrdom.”

The sister, 28, whose name is Shadia, according to Maan, and who spoke to the Palestinian news site Quds News Network, said Fadi al-Qunbar was not part of any terror group, but had carried out the attack of his volition.

BDS supporters across the country clink their wine glasses and clap politely.

The White House will send condolences to the family of the “martyr”.

And warn everyone not to blame muslims for the murderous attack.

There almost always is a very focused retaliation, so I’m expecting to see news about that shortly.

wonder what the introduction of driver-less cars portends.
their application to terror attacks seems unavoidable

I would think the software developers would have, as a priority, an algorithm that recognizes a group of people and does not allow the vehicle to hit them. Of course, if you hack the algorithm…..

There seems to be a need for truck free zones, but there won’t be peace until there is a significate reduction in the number of palestinians. There can’t be a negotiation until there is a loser.

To avoid this kind of thing in the future, California has ordered all trucks to now have mattresses on their front bumpers and be unable to travel more than 2 mph.

Wow! A job for mattress girl.

They should probably consider limiting the number of gallons the fuel tank can hold to around 10.

It’s been a progressive condition from Benghazi to Cairo to Damascus to Kiev, then they returned to Jerusalem.

The terrorists are supported by governments all over Europe. And here, our own government supports them.
The media supports them with few exceptions.
They are doing what they are paid to do, attack and murder Jews.