Kristine Luken’s last message to a friend: ‘Remember to search out the goodness of God in the face of tragedy’ 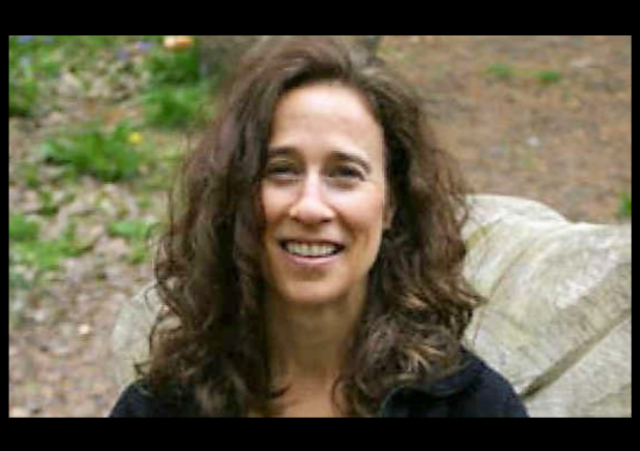 Almost one year ago to the day, we told the story of the 2010 stabbing attack on former British (and now Israeli) woman Kay Wilson, who was severely injured, Britain outraged by Palestinian payments to terrorists “who left this British woman for dead”.

While Wilson survived, though severely injured, her hiking companion that day, American tourist and Christian missionary Kristine Luken was murdered.

Wilson was interviewed two weeks after the attack, and the interview was run in The Jerusalem Post on January 27, 2011, in ‘What a waste, I’m 46 years old and I’m being murdered’:

The two women got out of the car with Wilson’s dog, Peanut, and walked a bit on the Israel Trail. They had wandered off the path to an overlook when suddenly two Arab men appeared and asked in Hebrew if they had any water.

The men gave her an uneasy feeling, so Wilson suggested they head back to the path. She walked in front of Luken and opened the blade of her pen knife.

“Suddenly, she screams, and as I turn around one of them pounces on me, the other one has already pounced on her,” Wilson recounted. “This is the moment I was so terrified.

This was the overwhelming moment of fear for me, this first part.”

She struggled with her attacker, who had pulled out a very long, serrated knife, and managing to stab him in the thigh with her pen knife.

It was this stab that later allowed forensics experts to collect DNA at the site and positively identify the attacker, the Shin Bet said….

Then the women were separated and Wilson was forced to get on her knees with her head bowed. Suddenly the fear of murder became real.

“I see he gets out his knife and he pushes my head forward and I’m just waiting to be beheaded. I think psychologically at that point I lost all sense of fear. I completely blacked out, all I could think about was that he’d make a clean cut that he wouldn’t be messy.

“I’m waiting for ‘Allahu akbar!’ but it doesn’t come.

Instead, I hear ‘Oh no, oh God,’ and I can hear them starting to stab [Kristine] a few times. The next thing I know…he’s just stabbing me.

Two Palestinians were arrested in Israel:

Wilson told the story of the attack in this TED talk:

Kristine Luken’s last message to a friend prior to her murder was “Remember to search out the goodness of God in the face of tragedy,” The Daily Mail reported:

Naomi Harralson, a friend and former colleague of the 44-year-old, said she and Miss Luken regularly shared inspirational messages via email.

Ms Harralsion said: ‘She has always from the first day I met her had a love for the Jewish people. She felt nowhere more at home than in Israel. Her relationship with God was everything to her.’

It was a relationship so meaningful to Miss Luken that she left her job at Patrick Henry College in 2009 to move to the United Kingdom to work with an evangelical Christian ministry called the Church’s Ministry among Jewish people.

Ms Harralson told ABC News: ‘It was not an easy process for her, but she was so confident that it was what she was supposed to do.’

Ms Harralson was Miss Luken’s boss at the Virginia college where Miss Luken worked as an assistant.

When Miss Luken moved to the UK, she and Ms Harralson kept in touch by emailing inspirational quotes to each other. The last quote Miss Luken sent Ms Harralson a few weeks ago now haunts her. It said ‘Remember to search out the goodness of God in the face of tragedy’.

Kristine’s brother attended the Israeli trial of the murderers, who were convicted:

The two killers will serve the rest of their lives in Israeli prison. But Israel has a past history of trading captive Israelis for Palestinian murderers. So there is a significant development that may prevent the killers from ever being freed in such a swap.

DOJ announced the charges today, Two Terrorists Charged in Connection With the 2010 Murder of a U.S. National in Israel:

A criminal complaint was filed today in the U.S. District Court for the District of Columbia charging Ayad Fatafta and Kifah Ghanimat, both approximately 39 years of age and from areas controlled by the Palestinian Authority, in connection with the Dec. 18, 2010, murder of Kristine Luken, a U.S. citizen, in Israel.

Acting Assistant Attorney General for National Security Mary B. McCord, U.S. Attorney Channing D. Phillips for the District of Columbia, and Assistant Director in Charge Andrew Vale of the FBI’s Washington Field Office made the announcement.

The complaint charges Fatafta and Ghanimat with murder of a U.S. National Outside the U.S., in violation of Title 18 United States Code sections 2332(a)(1) and 2. Arrest warrants were also issued today for both defendants.

According to the affidavit in support of the criminal complaint and arrest warrants, Fatafta and Ghanimat stabbed to death Ms. Luken, a 44-year old U.S. national who was hiking near an archaeological site while visiting Israel. She died at the scene. Another individual who was with Ms. Luken, a citizen of the United Kingdom and Israel, was seriously wounded in the attack but survived. The affidavit states that in 2012, Fatafta and Ghanimat each were convicted in an Israeli court of murder and other offenses in connection with the abduction and stabbing of both women. Fatafta was sentenced to one life term of incarceration plus 20 years, while Ghanimat was sentenced to two life terms of incarceration plus 60 years, for this and another crime.

Wanna know the best I’ve news have had for 6 years?

The USA Department of Justice has just issued an arrest warrant for the terrorists who tried to murder me and murdered my friend Kristine Luken.

Although the prisoners are in an Israeli jail, should my government ever decide to let murderers free again in a prisoner exchange, these cold-blooded savages will not be released. Instead, they will be shipped off to the USA to stand trial there.

Im so relieved, I’m near to tears. 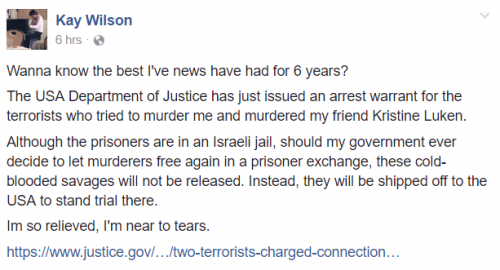 Criminal Complaint US v. Fatafta and Ghanimat for Murder of Kristine Luken by Legal Insurrection on Scribd

Wait. Why wasn’t something done during the last 8 years? I don’t understand . . .

There’s a new sheriff in town.

I used that line earlier today. It is a good one and has the added benefit of being true in the best possible way.

The two killers will serve the rest of their lives in Israeli prison. But Israel has a past history of trading captive Israelis for Palestinian murderers. So there is a significant development that may prevent the killers from ever being freed in such a swap.

“May” is the operative word here. It’s worth doing just in case it helps, but don’t get your hopes up.

Although the prisoners are in an Israeli jail, should my government ever decide to let murderers free again in a prisoner exchange, these cold-blooded savages will not be released. Instead, they will be shipped off to the USA to stand trial there.

When Israel releases these prisoners it doesn’t just open the prison doors and let them out; it hands them over to their side, often via an intermediary such as the International Red Cross. I doubt that intermediary would honor a US extradition request.

In fact I think this indictment pretty much guarantees that if they are ever included in such an exchange it will be expressly stipulated that they be handed over and not given to the Americans. Or, in the best case, the Israeli government will consult the then US government and get approval for the release; the current US government’s opinion will not be relevant, unless it happens in the next few years.

Perhaps a better idea would be to put in an extradition request now, put them on trial and in a US prison where they’ll presumably be safe from such deals, and then when their less-than-life sentences run out ship them back to serve the rest of their Israeli sentences.

Since there is no country of Palestine there can be no Palestinians. Just a couple of homeless dirtballs who should have been executed yesterday.