Remember, Hamas hides behind civilians and international media will try to cover it up

Remember, Hamas hides behind civilians and international media will try to cover it up

The propaganda war against Israel is critical to Hamas’ strategy, and the international media is a willing accomplice.

Seven Hamas military members were killed on November 11, 2018, when they got in a firefight with Israeli commandos on an intelligence gathering operation deep in the Gaza strip. Among the Hamas dead was tunnel commander Nur Barake.

One Israeli commando was killed.

Based on what has been reported, it does not appear that this was a targeted assassination of Hamas operatives.

Hamas and other affiliated terrorist groups have responded by firing several hundred rockets at Israel, and also targeted a bus with a Russian-made guided anti-tank missile. Rockets were fired at a rate that exceeded even the rocket fire that cause the 2014 Gaza war.

Israel is retaliating for the rocket fire, including hitting Hamas intelligence headquarters, located next to a school:

We struck Hamas’ military intelligence HQ in response to the 300+ rockets that terrorists in #Gaza fired at #Israel.
This is where Hamas' intelligence operatives gathered information to launch attacks on Israelis.
Hamas intentionally established their HQ next to a school. pic.twitter.com/nuHoLmlcD9

It’s hard to say, as of this writing, if the fighting will escalate into a repeat of the 2014 war. It may not take much. The bus hit by the anti-tank missile was empty, except for the driver, but had carried 50 Israeli soldiers shortly before the attack. Had 50 Israelis been killed in that bus attack, the pressure on Netanyahu to “mow the lawn” (launch an intensive attack on Gaza) would have been unavoidable. Similarly, if any of the rockets causes significant Israeli civilian casualties, or if the rocket fire continues, we would be looking at a repeat of 2014.

One important aspect of the next Gaza war will be the anti-Israel propaganda campaign claiming Israel is causing excessive civilian harm. We see this in every Israeli-Arab conflict, including the 2006 Lebanon War.

It already has started. 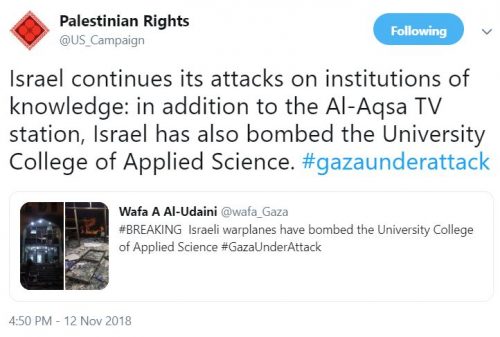 Hamas TV is used for military communications purposes by Hamas, and weapons development facilities take place at Gaza universities. But those details will get lost in the media coverage.

We know from the 2014 Gaza War that Hamas threatens and intimidates reporters into not reporting Hamas use of civilian facilities, or location of Hamas military installations next to schools. So what you will hear in the media is distorted coverage.

Every now and then, there was real reporting, but the videos and reports usually are not released until the reporters left Gaza:

Since anti-Israel groups already are ramping up the propaganda campaign, it’s important to revisit the media bias in the 2014 Gaza war, something we covered extensively, including these posts:

Here are some of the things that were not reported, but leaked out:

That some information leaked out is the exception that proves the rule. Hamas is extremely effective at intimidating reporters on the ground, and international media coverage is almost uniformly hostile to Israel.

This 2014 Branco cartoon summed it up perfectly:

I picked up on a Fox News story saying the initial “Israeli raid was botched”.

Dunno where they got that, as it was never mentioned in the body of the piece I read.

An IDF soldier was killed in what was suppose to be a covert op. If it wasn’t botched, the soldier would still be alive.

At what point was the mission “botched?” Intelligence preparation of the battlefield? Operational planning? In the execution of the operation?

I am not being callous when I say that just because an IDF soldier was killed, no matter how elite, does not mean the mission was botched. No matter how well planned and executed, there is always the risk of combat. It’s simply impossible to eliminate the element of chance.

That said it’s possible that something was overlooked during mission planning or someone screwed up or was merely lax. We just don’t have that information, and even if it turns out to be true the public is likely to never get that information. It’s just too early to start hunting for scapegoats.

RITaxpayer, I just wanted you to know, I didn’t down vote you. Nor did I intend to come across as obnoxious. My sole intent was to say it’s too early to be able to say if somebody botched this mission up.

I think we’re arguing about the definition of ‘botched’. Not a biggy.

It was an intel-gathering op, so they were not supposed to get into a firefight. It was supposed to be in and out quietly, leave no footprints. Somehow they were identified and fighting broke out, in which they killed the Hamas tunnel commander, but one of them was killed, someone so high up that his name cannot be published, and another officer was wounded. They had to call in air support to get out of there.

As the hunters in India used to say, “When you go out to hunt rabbits, be prepared for tiger.”

I’m sure the IDF is going over everything with a fine tooth comb to figure out just how they were recognized. I doubt they were driving through Gaza in a Bentley with Israeli plates. It’s sad this IDF commando was killed, but that doesn’t mean the operation was somehow botched. It could mean that Hamas has improved its intel gathering capabilities somehow.

Maybe it was just that the dusty, non-descript car they were driving had four good tires and nobody else has them since they burned them all at the border fence.

Seriously, if Hamas has developed new intel capabilities or discovered a vulnerability they could exploit the Israelis need to know it as soon as possible. That in and of itself could make this intel gathering mission worthwhile despite the casualty.

In the long run, if the Israelis can figure out how the Palis recognized the commandos, it may have been stupid for Hamas to tip their hand by reacting to the IDF incursion.

What matters is that they are attacking Israel, Israel should respond by dropping a fuel air bomb on each and every launch location, incinerating a 600 meter diameter circle centered on the missile point of origin.

I mean I personally thing Israel should just stop pussy footing around and conquer Palestine.

Appeasement by relinquishing Gaza, releasing hundreds of terrorists, and participating in the multiple sham ‘peace’ processes has gotten Israel nothing.

Palestine does not want peace.

Israel and “Palestine” are not two different places.

I thought the meaning was clear enough, remove Palestinians from the territory around Israel.

Any western politician, media member, “celebrity” or general Leftist who whitewashes, rationalizes and otherwise provides alleged moral support to Islamic jihadists amidst their ceaseless, millennia-long campaign of genocides, conquests and sundry atrocities against non-Muslims in general, and, Jews in particular, deserves the harshest condemnation and scorn as a willing collaborator with Islamic supremacism, totalitarianism, belligerence and genocidal aspirations against Jews.

as stated above, random chance and human error are
difficult to anticipate/predict

There are no civilians just collateral damage. This stupid idiocy is a recent leftist idea. Remember the populace of Gaza voted for Hamas, so they must suffer the wrath of the IDF!