Israeli missiles targeted an area close to the church sanctuary. 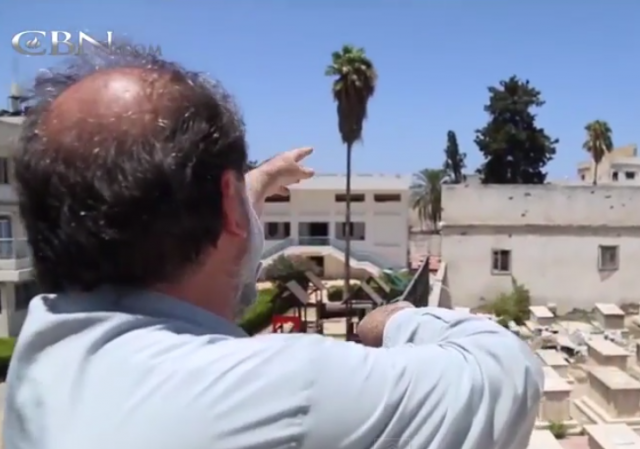 We focused the other day on the ethnic cleansing of Christians by Islamists in Gaza.

But there still are about 1500 Christians in Gaza.

In this video released today, Archbishop Alexios of Gaza describes how Hamas had fired rockets from the church compound (at 1:12)(h/t @ColRichardKemp);

Alexios took CBN News to the roof terrace outside his office to show how Hamas used the church compound to launch rockets into Israel. He refused to discuss details on camera for security reasons, but days after the war started, Israeli missiles targeted an area close to the church sanctuary.

This adds to the growing list of civilian locations used by Hamas and Islamic Jihad to fire rockets at Israel.

Not only did Hamas target true Gazan civilians, it seems that they deliberately set up rocket launchers in locations that were aimed at getting even greater world condemnation against Israel.

This story is simply further proof that Hamas deliberately targeted such locations with the aim of destroying the nearby buildings:

1. Hamas fired rockets in a location behind a major hospital. The obvious intention was to get Israel to fire rockets that would hit the hospital.

2. Hamas was firing missiles from the UN run schools with the obvious intention that Israel would aim at the locations leading to more condemnation from the U.N. – except in one instance it was the Hamas rocket that misfired that caused the damage.

3. On the day of the latest ceasefire, Hamas set up rocket launchers in the vicinity of a hotel that contained news teams. The clear intention was to get Israel to retaliate and take out the hotel. Imagine the world wide condemnation and hostility if Hamas had been successful.

4. Now we learn that Hamas fired rockets from a location that was in the vicinity of a Christian Church in Gaza.The Christians in Gaza are Palestinians but they have been sorely used by Hamas. The clear intention was that Israel would fire back and that the Israeli missiles would hit the Christian church leading to a large outcry from Christians around the world. Instead, the leader of this Church has revealed the despicable actions of Hamas.

We have no less than the UN Secretary-General saying that even if Hamas launched rockets from or stored rockets at UN facilities, that does not in any way excuse targeting those facilities and it remains a war crime to do so. That’s not the laws of war I recall studying, but it does make a big political show.

The Law of War allows retribution. The fact that the IDF has not done more of that in the face of EXTREME provocation speaks well for their forebearance; I certainly would respond more than they have. As for the U.N. … they still seem to believe that the are sacrosanct and are definitely out of touch with normal reality. Perhaps the SecGen should go to Gaza and arrange for the mass singing of Kumbayah.

I agree with everything you said. And I have read the relevant laws of war because I was tired of seeing people argue over them without actually knowing for myself. There’s nothing in them that implies Hamas can fire from these areas with complete immunity from even the most surgical response.

The Laws of War ONLY specify protected locations to be honored by all sides of the conflict. Hamas using churches or hospitals is, in and of itself the violation. Israel violates nothing by targeting an area from which offensive operations are launched. The area lost it’s protected status when used by Hamas. As for civilian areas, they are not technically “protected” in the same way as religious or cultural landmarks. The Law of War simply says that you don’t intentionally target non-combatants and that, when you plan military operations, you take into account the possibility / likelihood of civilian deaths or damages. It is not prohibited to fire into civilian areas so long as there is a legitimate military rationale.

Does anyone remember the Church of Nativity itself being sieged by the IDF? What a mess – Islamists inside & Jewish outside – Christians sorta not relevant.

It has been totally bizarro world for decades . Nothing new .

What’s new is that Hamas is being exposed and repudiated.

PossiblyValerie & this would be a good thang .

However this was when I realised western Christianity was done for . This site is holy to Christians & does not belong to Muslims or Jewish . Not one Christian voiced indignation at both of them or even said – F**ck you both , this is ours ” much less went & fought for. It .

The only hope is maybe the Eastern Orthodox who alone might be willing to fight .the Good Fight . Ihave no faith in the others .

* BTW I put the latest NSW police response to the bus incident on the earlier thread .

Might change but so far events are not as reported.on social media . It looks like a war between kids on a bus rather than grown men attacking said bus.