Hamas: We intimidated reporters into not covering rocket firing

Hamas: We intimidated reporters into not covering rocket firing

A Hamas spokeswoman tells the truth reporters in Gaza covered up. 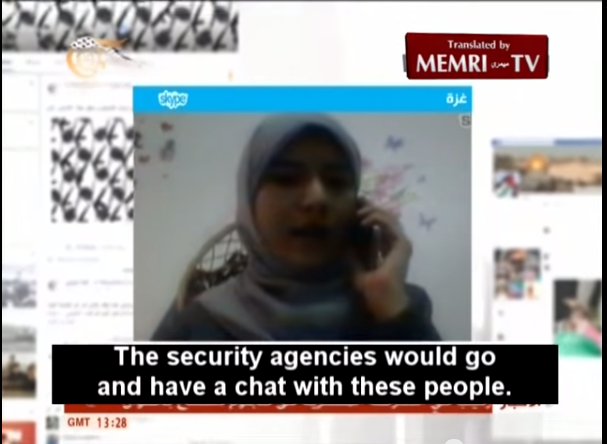 Israel and its supporters have argued for some time that the news media give a skewed view of Operation Protective Edge because reporters in Gaza are intimidated by Hamas.

Perhaps one of the most blatant examples was the disappearing tweet of The Wall Street Journal’s Nick Casey, showing a member of Hamas sitting for an interview in Shifa hospital. As Prof Jacobson noted, Casey was subjected to online threats. But the disappearing tweet was consistent Hamas’ rules for social media (that also apparently applied to major media organizations), which included “[d]o not publish photos of military commanders.” Apparently Casey was in violation of that.

Last week the Foreign Press Association in Israel (and not an organization that shrinks from criticizing Israel) decried Hamas’ “blatant, incessant, forceful and unorthodox methods” to intimidate journalists.

There were still skeptics. Jodi Rudoren, the Jerusalem bureau chief of The New York Times, called the FPA’s charge “nonsense.” The left wing Israeli paper Ha’aretz also covered the story calling the press “divided” over the issue. Even in the Ha’aretz story, the term”divided” seems generous. The one reporter who spoke on the record to say he hadn’t been intimidated, was forced to leave Gaza after he violated Hamas’ press guidelines.

If there was any remaining doubt about the intimidation, it was removed by an unlikely source, Hamas spokeswoman Yisra al-Mudallel.

According to the MEMRI transcript, al-Mudallel said:

Moreover, the journalists who entered Gaza were fixated on the notion of peace and on the Israeli narrative.

So when they were conducting interviewers, or when they went on location to report, they would focus on filming the places from where missiles were launched. Thus, they were collaborating with the occupation.

These journalists were deported from the Gaza Strip. The security agencies would go and have a chat with these people. They would give them some time to change their message, one way or another. …

We suffered from this problem very much. Some of the journalists who entered the Gaza Strip were under security surveillance. Even under these difficult circumstances, we managed to reach them, and tell them that what they were doing was anything but professional journalism and that it was immoral.

Al-Mudallel’s (perhaps inadvertent) admission explains why India’s NDTV’s news crew waited until it left Gaza before it broadcast its news of Hamas firing rockets right next to the hotel where they were staying. And why Italian journalist Gabriele Barbati left Gaza before telling the truth.

Writing in The New Republic, Oren Kessler noted that as July ended media outlets were more likely to report on Hamas’ war crimes.

As the conflict approached the one-month mark, media coverage had perceptibly changed. On August 1, a correspondent for Finnish TV reported seeing rockets fired from Shifa. Days later, an Indian TV crew, filming from their hotel room, spotted a Hamas team setting up a rocket launcher in a densely populated area nearby. Yet again, the footage was aired only after the crew left Gaza.
But the most damning footage of all came on August 5, from Gallagher Fenwick of the TV network France 24. Several days prior, the correspondent had been reporting live when a Hamas rocket whooshed over his head. Returning later to the launch site, he revealed that it had been a densely populated area 100 meters from a U.N. facility and 50 meters from a hotel frequented by foreign journalists.

Even if the coverage did change, Hamas’ intimidation played a crucial role in establishing a media narrative of excessive Israeli violence.

Yesterday Nechemia Gershuni tweeted a link to a Google spreadsheet showing that of some 700 reporters who were based in Gaza during Operation Protective Edge, only 15 actually reported on Hamas’ war crimes.

Mark Lavie a long time foreign correspondent for news organizations including NBC and NPR recently wrote in Why Everything Reported from Gaza is Crazy Twisted “[b]rutal intimidation and threats against reporters are so much more effective” than censorship.

The belated, under-reporting of Hamas’ war crimes proves his point. Now that Hamas as confirmed the charges, it will be harder for the media to continue pretending that they weren’t Hamas’ public relations agents.

Then don’t report anything. Hamas has been proven to do nothing but kill and then lie about it. Everything out of their mouths will be lies.

I was trying to think of someone stupid enough to be surprised by this kind of news.

And then I realized…

From the horse’s mouth: While the Israelis want peace, the Palis in Gaza have a very different agenda.

Kinda like the lack of outrage over the Obama administration putting it’s jackboot on the neck of so-called reporters here. Crickets from the left.