This report was just posted by NDTV showing Hamas setting up a rocket launch location next to residential buildings, then firing the rocket just before the current ceasefire (emphasis added).

It was only published after the reporters had left Gaza, for fear of Hamas retaliation:

In the minutes before the ceasefire kicked in at Gaza this morning, Hamas fired a flurry of rockets towards Israel – 30 according to some counts.

Israel has argued that that these rockets are fired from civilian areas, and this is why its retaliatory strikes can result in civilian casualties.

But this morning, NDTV witnessed one such rocket silo being created under a tent right next to the hotel where our team was staying. Minutes later, we saw the rocket being fired, just before the 72-hour ceasefire came into effect….

This report is being aired on NDTV and published on ndtv.com after our team left the Gaza strip – Hamas has not taken very kindly to any reporting of its rockets being fired. But just as we reported the devastating consequences of Israel’s offensive on Gaza’s civilians, it is equally important to report on how Hamas places those very civilians at risk by firing rockets deep from the heart of civilian zones.

This is consistent with other bits and pieces of information that has leaked out showing rockets fired next to the main Gaza hospital, from near U.N. facilities and from areas where reporters were gathering.

How much more of this was covered up by the media that we will never find out about because they are too embarrassed to admit how unprofessionally they acted, or because they don’t want the truth to come out?

Update: Judge Dan at IsraellyCool has determined the location of the launch — it was near the beach in Gaza harbor (full image): 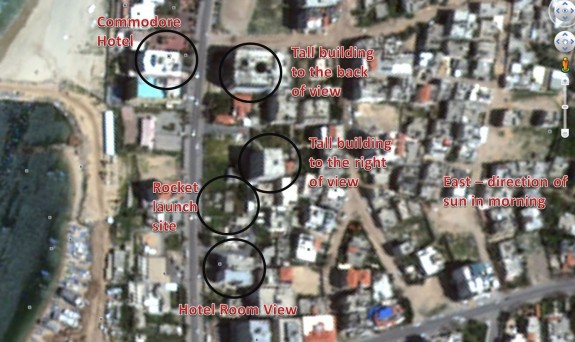 Also, a second video has been posted, this time by a French reporter. IsraellyCool reports it’s from the same location as the Indian video:

I can forgive them just as soon as I see the White House apologizes for criticizing Israel for killing civilians.

The tactics of Hamas are clear violations of law

I’ll be dark for this comment, mostly as an insult to the US government and the world at large for being useful idiots.

I give Hamas and Iran credit as an enemy that knows how to find and exploit a weakness and for playing it out.

Think about it— if you were them, could you have done more damage to Israel? Could you have played the rest of world and media for bigger fools?

No- they are good at what they do.

I give Bibi a blank check to do whatever the hell he wants with Gaza.

Yikes, I hope this reporter stays safe and keeps up the good work. Standing next to those tubes right after rockets were fired its him right in the line of fire for an Israeli strike. And that’s only if Hamas doesn’t kill him first.