Media a critical part of the Hamas war effort. 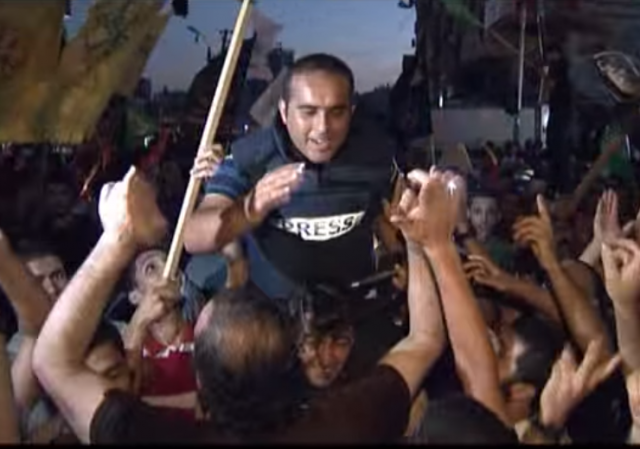 Tamer Al-Mishal was a reporter for Al Jazeera in Gaza during the recent conflict.

Among all the networks reporting from Gaza, Al Jazeera was considered vital to Hamas getting its message out.

Al-Mishal was granted special access to accompany Hamas fighters in tunnels to prove to the world that Hamas still had fighting capacity.

Al-Mishal’s coverage was so helpful to Hamas that after the ceasefire, crowds lifted him in the air shouting his name. (h/t Paul Hirschson)

The “About” note to the video reads (Google Translate):

Mahtflon [sic] in the field of the main hoist the Gaza-Jazeera correspondent Tamer Mishal Ali shoulders after the announcement of a cease-fire in recognition of his efforts and the efforts of Al-Jazeera coverage of the war in Gaza.

The media was so favorable to Hamas, and so compliant with Hamas’ demands, that had more reporters stuck around until late August, they too could have been part of the celebration.

The only good news to come of this is that they royally scammed him. Karma is a bitch, Al.

Then again, the current US president is a traitor.

When you have MSNBC working for you, Al Jazeera is redundant.

too bad it wasn’t a stick of SDB’s raining down on that street of legitimate targets.

Hillary’s favorite network, yes? It used to be Al Gore’s, too…..till he decided to sue them. Disgusting.

Support for those evil terrorists – it’s so sickening! – and the world continues to be blind!! Truly a world turned upside down, inside out, with no end in sight.

Mark Levin’s answer, The Liberty Amendments, is the only way out for America, I believe. Let’s hope it’s not too late.

That last link is broken……. this one should work, if you want to check it out. 🙂

The prog drone army tried to lift Candy Crowly the same way after her performance ‘moderating’ the presidential debate, but they couldn’t get her collossal ass off the ground.

RE: “Media a critical part of the Hamas war effort.”

THEN, it’s time to De-Media them.