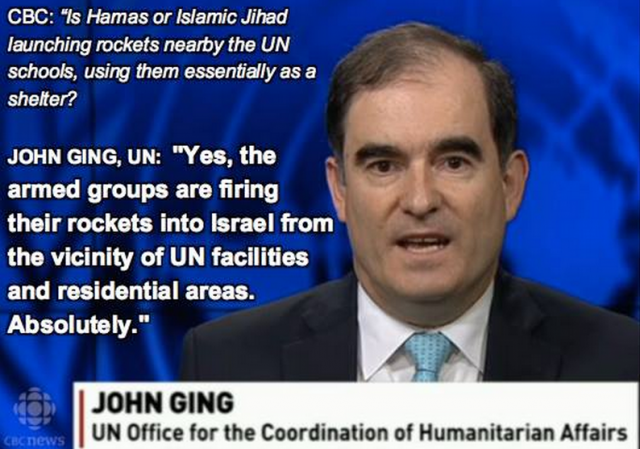 What we already knew, but some UNRWA officials have pretended doesn’t happen.

Puts in context how some UN facilities and civilians are hit either by misfired Hamas or Islamic Jihad rockets or Israeli return fire.

Via Hillel Neuer of UN Watch, here’s the description of the video clip (Google translate):

John Ging the Office for the Coordination of Humanitarian Affairs of the United Nations confirmed on Radio-Canada July 30, 2014 that Hamas and other terrorist groups in Gaza get their rockets into Israel near shelters Palestinian civilians and since residential areas

This is no low-level person. From Wikipedia, here’s part of his bio:

John Ging (born 1965) is an Irish national and former officer in the Irish Army who served as head of the United Nations Relief and Works Agency (UNRWA) in the Gaza Strip from 2006 to 2011. As head of the United Nations’ 10,000 employee operation there, he became a sought-after commentator by the media and an information source for foreign governments during Israel’s 2008-2009 offensive in Gaza.

John Ging, an Irish national, was appointed by United Nations Secretary-General Ban Ki-moon as Director of the Operational Division at OCHA in February 2011. He oversees the day-to-day management of all OCHA field operations worldwide and on behalf of the Emergency Relief Coordinator, and is her day-to-day focal point for supporting Humanitarian Coordinators. Mr. Ging is also the lead adviser to the Under-Secretary-General for Humanitarian Affairs on operational decision-making.

It’s rare that we hear such admissions, even from reporters in Gaza, considering the Media cover-up of Hamas crimes.

Yes, but what are we going to do about all these news reports, including Fox, that start with the premise that Israel fired on civilian targets?

They can hardly ignore no less than the Secretary-General using that premise himself.

So the UN knows, the UN just doesn’t… care. Lovely.

What reality? In the IDF’s entire nearly 70-year history, it has never once knowingly targeted an innocent person.

We do not have to ignore it. Islamists commit war crimes, which are known as hirabah in Islam and are punishable in Islam by death. A Canadian observer who was subjected to this by Hezbollah and ultimately killed by return Israeli fire, characterized Israel’s action as “tactical necessity.”

Media coverups? Inconsistent positions? Excellent article at Powerline blog, “Hamas and the Libertarians“. It’s now National Brotherhood Week all the time. (Except, of course, that “everybody” still hates the Jews): https://www.youtube.com/watch?v=aIlJ8ZCs4jY

It’s great this clip was found but this Irish UN guy’s full interview is much more helpful to Hamas, as his past interviews have been. First, the You Tube clip in the facebook post is only 46 seconds (https://www.youtube.com/watch?v=CvaZ1a9wW3Y). The full Ging CBC interview lasted over 10 minutes (http://www.cbc.ca/player/News/Politics/ID/2479781349/), wasn’t favorable for Israel, the admission about Hamas was only in passing and wasn’t built upon by the interviewer. Ging twice said in the full interview, “one child is killed every hour” (http://www.cbc.ca/player/News/Politics/ID/2479781349/) in Gaza (or Palestine, whichever he said). This is exactly the “dead baby strategy” Hamas has long used as Alan Dershowitz has written. It’s also the constant “media dead count” so helpful to Hamas. The long form CBC interview starts with a US State Dept. spokesperson who says children were killed. Within the interview, Ging rushes past his Hamas admission to correct the interviewer about blaming UN schools for stocking weapons. Ging says all the schools were vacant, that the UN would never allow actual schools to store weapons, etc. He gave a 2009 interview which was just Israel bashing, he repeated over and over how he had eye witnesses that Israel deliberately fired on innocent civilians, he knew it for a fact, and that the Red Cross reported the same. It’s helpful to remember the UN is a criminal organization that only exists due to endless no-strings US taxpayer cash which UN personnel can spend redecorating their homes and will suffer no consequences. UN personnel can’t be charged with any crime anywhere in the world. And we accept this.

Which is the same thing as Israel NOT firing on the same UN facilities.

Israel does not fire at civilians. It does fire at legitimate military targets. If the UN allows its facilities to becomes such targets, then Israel has every right to fire at them.

Well, if the UN is handing bombs back to Hamas and letting them fire from UN cover…. it had better be bomb-proof.
I am no fan of the UN, so if they are warned, I suggest they pull out. Otherwise, it is their own fault what happens to their people.