BDS hate on campus is real

BDS hate on campus is real

Students are speaking out about the culture of intimidation. 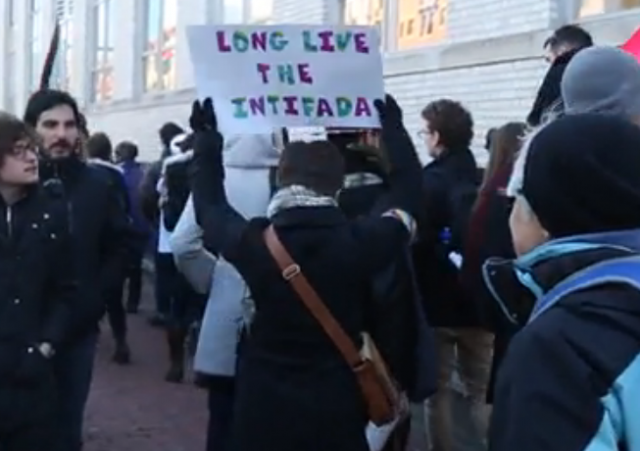 We have posted many times about how the Boycott Divestment and Sanctions movement, through faculty and Students for Justice in Palestine branches, has turned campuses and classrooms into political battlefields in the worst way.

When Northeastern University SJP marches to the chant of “Long Live the Intifada,” they are celebrating the bloody suicide bombing campaign.

When Vassar College SJP pickets a class and forces a professor to walk the guantlet just because the course involved a trip to Israel, and anti-Israel students jeer Jewish students who spoke up for Israel, they are sending a message of continued conflict — so it was no surprise when Vassar SJP tweeted out a Nazi cartoon.

When NYU SJP dorm storms and invades the privacy of students in their dorm rooms to leaflet against Israel, they bring the war into bedrooms.

When the faculty members of American Studies Association bring the war to campus through an academic boycott of Israel led by people whose explicit goal is the destruction of Israel, it sends a message to students that to be pro-Israel is to be unacceptable in the classroom.

When faculty are willing to destroy academic freedom for everyone in order to hurt Israel, yet play victim when their own academic freedom allegedly is impinged, the argument no longer is over principle but pure power.

When conspiracy theories involving Jewish control of the media and the money are central to the arguments of BDS supporters who claim not to be anti-Semitic, anti-Semitism flourishes.

When a central thesis of the student, faculty and off-campus leadership of the BDS movement on campuses is that Zionism is the cause of anti-Semitism, and even Naziism, anti-Semitism is rationalized.

When stoking and exploiting racial tension is a common tactic used to increase hatred of Israel, and BDS refuses to allow Arab and Jewish students to interact for fear of “normalization,” BDS tears campuses apart.

When making it costly to be pro-Israel on campus is the major achievement of student BDS activists, discussion is impossible.

When BDS banners and messages are at the front of Jew-baiting crowds in Europe, Boston and Miami, it’s clear what BDS is about.

When intolerance for pro-Israel students reaches the heights it has on some campuses, it’s no surprise when violence erupts.

The voices of the students intimidated, harassed, and threatened by these tactics finally are being heard.

This video has some of those voices:

Their behavior and intimidating tactics follow the instructions and example of their self-proclaimed prophet, “We will cast terror into the hearts of those who disbelieve for what they have associated with Allah of which He had not sent down [any] authority. And their refuge will be the Fire, and wretched is the residence of the wrongdoers.” Koran 3,151.

Oh, absolutely. Faced with a potential Ebola epidemic, what will save America is more of the people who brought us Healthcare.com, Cash For Clunkers, and shovel ready unemployment.

Are the young adults who are banding together to have their voices heard in support of BDS and spew hatred of people of Jewish faith and culture, the same students who march with their banners to up hold civil rights of minority groups, be they Indian, Black, Hispanic? If so, why the hypocrisy? What makes them feel they have the right to say who is or isn’t able to participate in “their” world. These kids seem to be acting out “Survivor” and on an island they have not yet contributed to? It’s like they have this huge bully pulpit for the first time in their lives and have empowered themselves to beat up on someone smaller who has opted not to play in their sandbox. Where were / are their parents in all this? They all couldn’t have been raised in a void.