The threatening face of anti-Israel boycotters in America

The threatening face of anti-Israel boycotters in America

Coming to a campus near you this fall.

We have featured them before.

The screamers, and disrupters, and threateners. They say they want another Intifada — the bloody Palestinian suicide bombing and murder campaign that killed thousands starting in 2001, causing Israel to build the security barrier.

Now they complain about the security barrier, and call it the “Apartheid Wall.”

Oh boy, do they love to flash the bird. 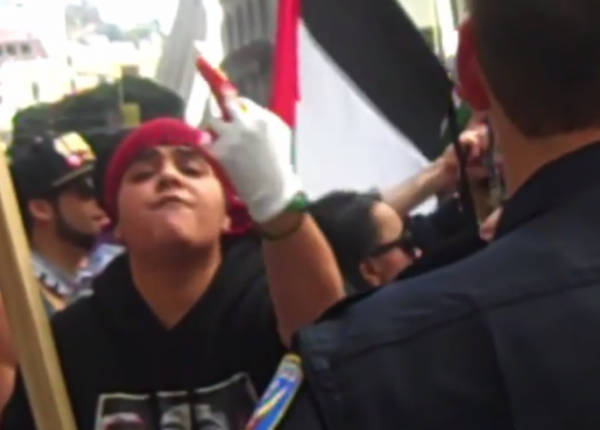 Coming to a campus near you this fall.

Here is the latest, via Truth Revolt:

The footage was captured by Sam Levine, Executive Director of Zionist Organization of America West, who noted that the protestors were simply calling for terrorism:

The protesters chanted, “from the river to the sea, Palestine will be free,” which calls for the complete destruction of the Jewish State. They also called for another intifada, which means they wish to see massive terrorist attacks perpetrated against innocent Israeli civilians. I have no doubt these lunatics would have assaulted us if it wasn’t for the large police presence and barricades that were eventually placed between us. There is no compromise with people like this.

Here are two original Legal Insurrection videos, so you can see some more of these charming youth:

Here I am at Camp Intifada,

And it’s said we’ll have some fun if they stop hating.

Got your package nice GPS

Led me right here to BDS

He’s a bit shell-shocked from all the hateful F-bombs.

I just lve that song .And ‘They’re coming to take me away’ .

This is what “multicultural” immigration policies get us: Huge numbers of the Koranic version of Nazis, organized in the Muslim equivalent of such Nazi pressure groups as the German-American Bund.

This protest was on a Monday. Don’t these people have to work?

The BDS crowd has a tremendous overlap with the spoiled brats of the OWS crowd. They all should have a large “L” burned into their forehead.

In fact, the face of the anti-Israel/pro-jihadi demonstrators in the West is virtually indistinguishable from that of any leftist group.

They are motivated by hate and their tactics are pure intimidation, shouting down opponents and veiled or overt threats of violence.

America, this is where your New Democratic Party is rapidly headed. Choose wisely.

Well the Democrats ARE the party of the Klan. They’ve been there and never left, just “put on a happy face” or two.

Such a counter movement against Islam’s deception propaganda is needed on campuses.

Use Socratic methods. Ask questions such as, ‘Do you approve of honor killings, female mutilation, human trafficking?’

From the video at 2.50 min: “I am here today as the leader of the NE Palestine Underground”. Having just watched the excellent exposé of Bill Ayers and the Weather Underground on the Kelly File, I find this statement particularly chilling.

“I have no doubt these lunatics would have assaulted us if it wasn’t for the large police presence and barricades that were eventually placed between us.”

As the Japanese peasants eventually discovered, there are ways of leveling the playing field when faced with a more physically-powerful adversary.

Watching the San Francisco video, I could not help but notice that the anti-Israel crowd was flying a large number of Palestinian flags, but not a single American Flag.

I took a clear piece of plastic and drew a rifle scope crosshair on it. I put it over the loudmouths while watching. It was much more enjoyable.

Good luck with your intifada. It might work for the first day here, but it will kind of suck for you after that.

You could have substituted Valerie Jarrett and her puppet Barry Obama for any one of the clowns in that video.