I have argued strenuously against the academic boycott of Israel, led by people like Steven Salaita, on a number of grounds.

Not the least of those grounds is that academics who insist on violating the academic freedom of Israelis and those who wish to interact with Israelis do damage to the system in its entirety.

There is a related point to how academic boycotts have a negative ripple effect.

On what ground do the academic boycotters of Israel claim their own academic freedom if they are so quick to deny it to others?

Because they think they are right? What if the people who want to boycott the boycotters believe just as firmly in their own correctness?

Now you can see why universities reacted so swiftly in rejecting the academic boycott — it’s easy to start, but hard to stop.

As posted earlier, Inside Higher Ed reports that Salaita allegedly was denied an offer at U. Illinois at at Urbana-Champaign because of his tweets. I don’t know if that’s true, if it was the anti-Israeli views expressed in the tweets, or if it was that the tweets arguably presented Salaita as an unhinged and unstable demagogue who would bring disrepute on his institution and intimidate his students; or any or none of the above.

Many of those rushing to Salaita’s defense on the ground of academic freedom, however, themselves are among the worst violators of academic freedom through the anti-Israel academic boycott. They would turn away a Dean or representative of an Israeli academic institution, would bar joint programs and research, and even cooperation in journal publications.

In a clear case of national origin discrimination, these boycotters apply a litmus test to Israeli scholars (that they are not representatives of or officials of their institutions) applied to no other nationality. 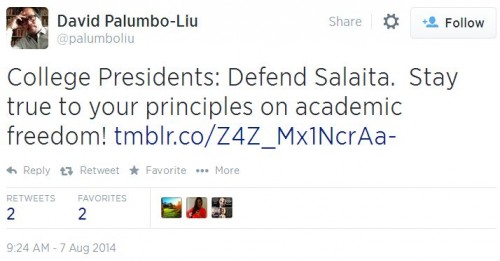 I saw this comment at Crooked Timber faculty blog making a similar point:

The resolution passed by the ASA supported by Corey [Robin of Brooklyn College] and Steven [Salaita] prevents scholars affiliated with the management of Israeli institutions from speaking at ASA conferences (deans, gov’t official, institute heads, etc). That violates academic freedom in my book.

I guess by your standards no academic boycott is arbitrary if you think the cause is just. If so, we both could make a very long list of countries whose affiliated scholars we could boycott. Like what’s happening in China/Tibet? Saudi Arabia? Egypt? Myanmar? Or why not just name people?

There is a reason that the likes of AAUP oppose academic boycotts and why the South African boycott generally left out academics.

btw-when I think of slippery slope, I think of an exception to a principle (academic freedom in this case) that can lead to further exceptions, using similar justifications or not, since the bright line was erased.

But I doubt they will. Because they believe they are right.

UPDATE: NYU Prof. Lisa Duggan, current President of the ASA and a very aggressive supporter of the academic boycott, also has tweeted out for University Presidents who opposed the ASA boycott to support Salaita (linking to Palumbo-Liu’s article):

UPDATE: Vincente Diaz, co-Chair of the search committee at UL-UC that recommended hiring Salaita also is an academic boycott supporter, having supported not only the ASA boycott but also the boycott by the Association for Asian American Studies.

You are entitled to your own opinion.

Any company or university is just as entitled to choose not to employ you if your opinion does not represent them in a good light.

My understanding of “academic freedom” is that it gives no special license to academics, despite how they seem to have twisted that concept.

It is also NOT an omnibus concept, but is limited to the field of study of a given academic. It also does not extend outside the academe. It’s sole purpose is to foster open thought and expression in an academic field of study WITHIN the academy.

Otherwise, academics have exactly the same freedom of expression the rest of us do.

This issue comes up when there are complaints about professors spending class time spouting political opinions that have nothing to do with the subjects that the students thought they were there to learn about.

On one side, there’s an absolutist “academic freedom” defense, which sometimes boils down to “I’ve got tenure so I can do anything I want.”

On the other side, there’s the observation that teachers or parents or taxpayers or wealthy patrons are paying so that students may have the benefit of expert knowledge on the subject advertised in the catalog. Does the university have some responsibility to ensure that the precious, paid-for class time is not employed for some unrelated purpose of the paid professor’s choosing? I think so.

To which I’ve heard the reply that this puts us on the slippery slope toward punishing faculty solely for their political viewpoints — which, by the way, is most likely to happen when conservative viewpoints are involved. But slippery slope arguments tend to overlook the fact that few things in life are absolute, and limits are routinely drawn somewhere between extremes.

I agree with all your points, and would simply add that NOBODY has a license to commit the fraud incorporated in using class time in a given subject for the purpose of spewing unrelated opinions in a clear effort to indoctrinate.

There is a marked difference between an institution boycotting a country and the same institution exercising discretion and applying standards in hiring. Salaita is obviously, by the evidence, an unsatisfactory employee for any company because of his unrestrained aggression and hatred for vast swaths of people.

The history of “academic freedom” is poorly documented.

That said, there is some evidence that it became a popular rallying cry in the 1930s. The idea at that time was to prevent college administrators from removing communists from their faculty.

At that time many intellectuals, faced with the Depression and what seemed to be the gross failure of the traditional American economic system, found communism and its ideas of planned economies attractive. The allegiance of the communists to the Soviet Union was not as apparent as it became in the ‘forties and ‘fifties. Nevertheless, some considered it desirable to get communists out of colleges, where, despite the merits (or lack thereof) of their “research”, they could work their famous communist propaganda on students.

The danger became more acute in the postwar atomic era, but by then nobody remembered the real reason for “academic freedom”, and the communists proved difficult to remove.

The overt communist infiltration of college academia dropped sharply after the NYT published Khrushchev’s denunciation of Stalin, and the subsequent near collapse of membership of the Communist Party USA.

However, even after the near disappearance of the overt communists, the persistence of the concept of “academic freedom” made it possible for all sorts of fruitcakes to burrow into the bowels of academia, filling up the spaces left by the communists, and even more. And those fruitcakes are still there.

As a stand-alone concept, “academic freedom” is not particularly tenable. Certainly, all honest academic pursuits would be aided by freedom. But so would all honest pursuits, academic or otherwise. Why should the academy have special privileges the rest of society does not?

The idea that the outrageously racist conduct of an individual outside the academic sphere may be defended as a exercise of academic freedom and thus, ought not affect his job prospects is not only preposterous but it is insulting to those who actually understand what academic freedom is. It is NOT a license to disparage those with whom you disagree; it is NOT permission to utter or write the most vile racist remarks. Indeed, if this putz (sorry to insult putzes the world over) had uttered racist or sexist sentiments about one of the world’s protected groups, none of the jackasses (I apologize to jackasses the world over for the insult) who are now defending him would have the slightest compunction in seeing him launched.