It’s part of a pervasive dehumanization of Israeli Jews to justify Hamas’ deliberate rocket fire into the middle of cities and perpetual war to destroy Israel.

This tweet caught my eye because it distills how deviant the propaganda has become comparing not just Israelis, but Zionism itself, to Nazism.  The tweet shows the founder of modern Zionism, Theodor Herzl, giving birth to Hitler:

As if that’s not bad enough, note the reaction from Max Blumenthal, one of the leading anti-Israel and pro-BDS campus speakers and authors: 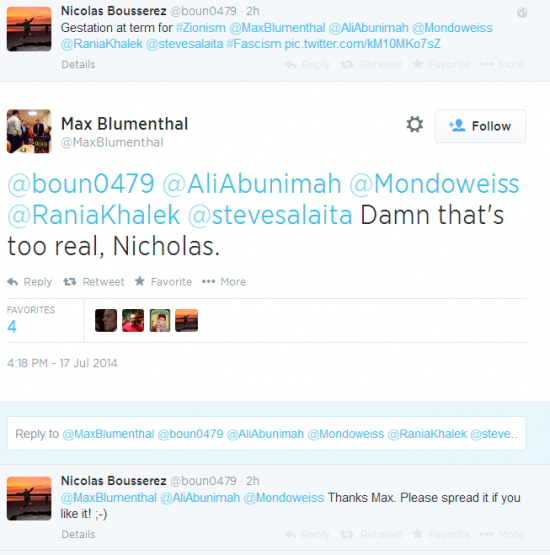 The anti-Israel movement has come to this.

Update: The creator of the photoshop, Nicolas Bousserez is doubling down, tweeting it out again with the wording “Hertzl’s descendant.”

UPDATE: U. Illinois Prof: Zionists partly to blame for recent outbursts of anti-Semitism

How does a guy let himself get that sick?

Evil…thinks that it is good.

If one believes, with a fierce, burning conviction, and does not -question- oneself, it’s very easy to spiral down into what some think of as sickness and depravity, especially if others reinforce the unquestioned beliefs and methods.

Ah reckon. But the thing is, one usually has some sense of proportionality, some sense of crossing a rational line into a dark place that acts as a tether.

Whether it is a rational, thoughtful process or a more intuitive function of what we call conscience, or the calling of the better angels of our nature, there is something in almost all of us that pulls us back from the brink the haters of the Blumenthal ilk have thrown themselves off.

I suppose his father bears some culpability, too. But only some.

Impossible – Islam is the Siamese twin of Nazism:
http://www.tellthechildrenthetruth.com/gallery/

I love the smell of desperation in the morning.

Professor, thank you for this forum, and thank you for following this topic. There is something big to be won, here, and it is not just the reputation of Jews, but the soul of Islam, with a side of world peace.

These jerks are beatable, but somebody has to bother to answer them, and do it effectively. Good job.

A back up thank you to yours for the diligence Prof. J. gives to the current situation not only in Israel, but here within our country. Thank you to Prof. J. for taking the fight to those who extol the virtues of anti-Semitism and would suppress the only democratic state in the Middle East. He is forcing the radicals to debate their Anti-Semitism not just on the campuses but within our own government administration foreign policies.

The soul of Islam, in brief: The whole world must be made to submit; no un-Islamic power on earth is legitimate; every Muslim is superior to every non-Muslim; killing infidels for the sake of spreading Islamic power is the surest way to paradise; Muslims are entitled to take anything they want from infidels; Muslim men are entitled to take infidel women and girls as sex slaves; apostates must be killed; anyone who “insults” the “prophet” must be killed; it’s okay to kill one’s own children if they dishonor Islam; music is evil; dogs are evil; everything wrong in the world is the fault of Jews; every failure of Muslims is the fault of Jews; etc.

That was Islam at its origin. That is the soul of Islam today. The “spiritual” part was added by people who were forced to live under it and tried to make the best of it. Human goodness sometimes emerges from beneath the Islamic jackboot.

In the old days, people kept their depravity secret. Maybe we’re better off when they make it public, but not by much.

The beauty of Twitter is that it gives these people a very public forum where they can expose their idiocy for all to see.

(Hollywood talent agents need to keep their clients the hell away from it.)

How can anyone think that way, or agree with it?!

G-d help us if we don’t stand against such evil, such lies.

Today is Herzl’s Yahrzeit, the anniversary of his passing on the Jewish calendar. One wonders what he would make of all this.

Do the same thing for the Palestinian national movement and everyone named in that tweet would be shouting racism from the rooftops.

To be clear, I’m not recommending anyone do that, I don’t think that kind of hate belongs in the discussion regardless of side.

Max Blumenthal has been, and will continue to be a horrible human being. He deserves all of the shaming he has coming.

A tiny troupe of scum bags living in their own distorted hate-world. Fortunately America has always been exceptional in its treatment of religions. In Pauline Maier’s excellent book “Ratification: the People Debate the Constitution,” she recounts that on the day that New York State ratified the Constitution, there was a parade in New York City. The parade was led by a Protestant minister, a Catholic priest, and a Jewish Rabbi. This in 1789.

These loons will have a tough time overcoming our traditions on this score.