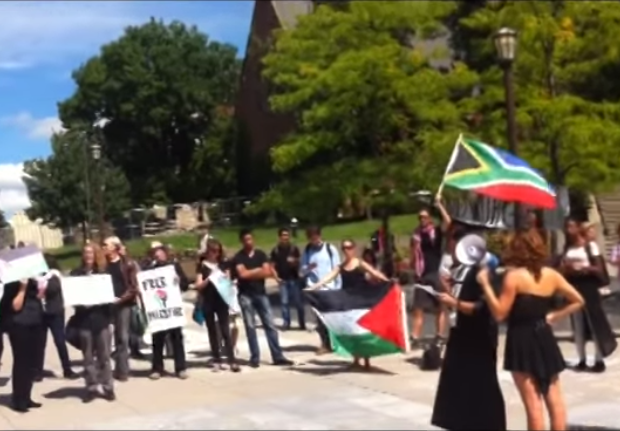 I have noted before the disturbing trend of anti-Israel Boycott Divestment and Sanctions (BDS) supporters blaming Israel and/or Zionism for the recent outbursts of anti-Semitism around the world.

I first noted the issue in connection with a tweet from Professor Steven Salaita, where he tweeted that “By eagerly conflating Jewishness and Israel, Zionists are partly responsible when people say antisemitic shit in response to Israeli terror.” [Salaita’s tweets became a big issue, although that tweet has not receive a lot of attention.]

In that post, I noted that Salaita was far from alone. There has been a trend to use the “Zionism causes anti-Semitism” verbiage as a way of deflecting the grossly anti-Semitic BDS-led protests seen around the world under the guise of protesting the Gaza conflict.

Making Yom Kippur a UN holiday to honor the genocidal "state" of Israel would be sure way to increase global anti-Jewish sentiment.

Fast forward to last week at Cornell, when Students for Justice in Palestine held what was to be a mobilization rally on campus related to Gaza.

Casey and fellow Cornell Review member Andres Sellitto covered the rally. You can read their full report at The Cornell Insider blog.

There was a paltry turnout, only about 40 people many of whom were not even students, according to Casey. (The Cornell Sun put the number at 30.) Lots of socialist literature was handed out.

But one sentence in Casey’s report caught my eye:

Another off the wall remark included something along the lines of “Israel’s occupation of Palestine is the number one cause of anti-Semitism in the world.”

Casey told me that the remark was shouted from a bullhorn, and was pretty close to how he wrote it out in his post.

I think you will be hearing more along these lines as campuses heat up this fall.

But wait, will campuses heat up as expected? Given the low turnout at the Cornell rally, maybe not.

Anyway, here’s the video from the Cornell Review (language warning)

Something is seriously wrong with Salaita’s brain housing group.

So the protest was in front of the Campus Store and Sage Chapel … I guess they didn’t want to push their luck in front of Hillel.

You know what I find interesting? When I went to collage we were there to learn and expand our critical thinking skills, not to protest and become activist.

I wonder if the chickie in the short black dress and boots knows she’d be in a bee-keeper’s outfit in Ham-assville…???

THAT would be quite a rude awakening.

…and at the ripe old age of 20 would have 5 kids, get beaten regularly and unable to read anything except kitchen labels.

What I find interesting is that, when I went to college, the professors were there to teach the subjects listed in the course manual, not to spend all their time advocating for their personal political agenda. (That was left to the students!)

Simply fascists doing what they do best: hate.

Once again, the one common thing that repeats in EVERY one of these “protests” : no American flags.

These are not U.S.A. loving people.

The problem isn’t that there are really so many antisemitic leftist/islamist nuts, it’s that they are each so loud and prolific and persistent that they gain influenced out of all proportion to their actual numbers.

When Jewish students and students from Israel or others who merely show support for Israel are faced with screams and catcalls and chants from angry mobs of spittle-flying crazies, it tends to discourage their participation in the public discourse.

Which, of course, is precisely the intent.

I learned about protest and movements and their coverage in the 60’s. There was a peaceful anti-war concert being held at the parade ground at LSU in 68. The flag ceremony was conducted and the concert stopped and everyone respected the flag. When it was over the concert continued, but the press had the flag raised again and redid the ceremony with the picture showing the people not showing respect. Then there was the occasion when the SDS (Obama’s group) came to burn the flag. The press showed them approaching the area, stopping, conferring and leaving. They were lauded for their respect. What the press did not show were the 2000 students with bats at the other end of the parade ground.

If the inhabitants of the west bank and Gaza want peace, they should make peace on the best terms they can get, not try to continue to wage unsuccessful wars that hurt their own people far more than Israel. Stupidity repeated many times is still stupidity.

Makes perfect sense to me. If there were no Jews, then there’d be no anti-Semitism. So it’s the Jews fault. /s