BDS poisons everything it touches 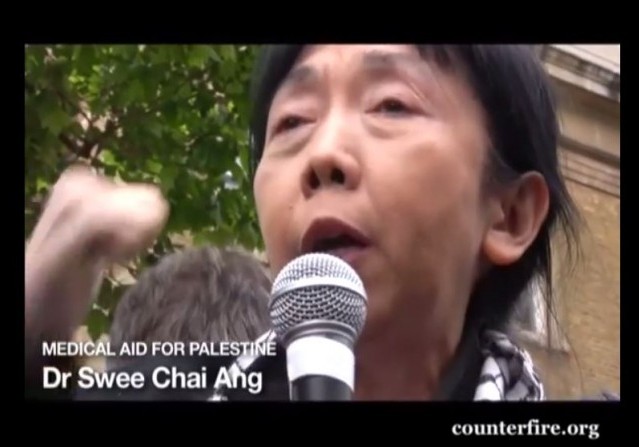 You need no better proof of how the anti-Israel Boycott, Divest and Sanctions movement poisons everything it touches than the story of how anti-Israel activists turned a once-respected medical journal, The Lancet, into a BDS platform.

Just like Ohio University student senate president Megan Marzec hijacked the purpose of the ALS Ice Bucket Challenge to bash Israel, so too a handful anti-Israel physicians, including the notorious Dr. Mads Gilbert, corrupted the purpose of Lancet by publishing an anti-Israel screed in the journal.

That was bad enough, and caused substantial protest against the biased politicization of a medical journal .

Then, NGO Monitor, a group that investigates the anti-Israel Non-Governmental Organization industry, uncovered that two of the physicians involved peddled anti-Semitic conspiracy theories and circulated a David Duke video.

The Telegraph in Britain reports:

For almost 200 years, it has been regarded as a well-respected medical journal.

But according to senior British medical figures, the Lancet is being hijacked to campaign indefatigably against Israel, and used as a platform by alleged conspiracy theorists.

In August, it published a controversial “open letter for the people of Gaza” that condemned Israel in the strongest possible terms, but strikingly made no mention of Hamas’ atrocities.

The five principal authors of the letter made it clear that they had “no competing interests”. However, all of them have campaigned vociferously for the Palestinian cause over many years.

In addition, a cache of emails openly available in Google groups show that two of the authors, Dr Paola Manduca and Dr Swee Ang, have sympathies with the views of David Duke, a white supremacist and former Ku Klux Klan Grand Wizard.

Dr Swee Ang, an orthopaedic surgeon, and Dr Manduca, a professor of genetics at the University of Genoa in Italy – who are both members of pro-Palestine NGOs – sent round-robin emails to their contacts promoting a video entitled “CNN Goldman Sachs & the Zio Matrix”.

The video features an extended anti-Semitic rant by Duke, in which he claims that “the Zionist Matrix of Power controls Media, Politics and Banking” and that “some of the Jewish elite practices racism and tribalism to advance their supremacist agenda”.

Dr Ang wrote: “This is a shocking video please watch. This is not about Palestine – it is about all of us!”

In another email, Dr Manduca forwarded a message alleging that the Boston marathon bombings were in fact carried out by Jews. “Let us hope that someone in the FBI us smart enough to look more carefully at the clues in Boston and find the real culprits behind these bombings instead of buying the Zionist spin”, it said.

Conspiracy theories surrounding Jews and the influence of Israel (or the “Israel Lobby”) are endemic to the BDS movement, and not just in Britain.  Glenn Greenwald, among others, has used the term “Israel Firsters” to paint Jewish supporters of Israel as disloyal to the United States.

Jim Dey, a columnist for the Urbana Journal-Gazette, notes the “paranoid style” of conspiracy theories circulating among supporters of BDS promoter Steven Salaita, who was denied a tenured position by the Board of Trustees of the University of Illinois at Urbana-Champagne:

To many people, the Salaita story is one that involves a guy between jobs who shot himself in the foot with some ill-timed, ill-considered incendiary and obscene comments about Israel and Jews that prompted a university chancellor to withdraw a job offer. To them, the messy process raises questions of freedom of speech and professional conduct, about which reasonable people can disagree, sometimes vehemently.

To others, particularly those who share Salaita’s hostile views toward Israel, it’s all about the long reach of the Israeli government and the Jewish lobby and their determination to punish critics….

From their perspective, Chancellor Phyllis Wise didn’t act on the Salaita matter in good faith to prevent harm to the UI’s reputation but, instead, to carry water for Israel.

These type of Jew-centric conspiracy theories were at the core of Salaita’s controversial tweets, according even to one of Salaita’s UI-UC campus supporters, Professor Faisal Mohamed:

… Those who brand [Salaita’s tweets] as anti-Semitic are wrong, but those who claim that they are completely devoid of anti-Semitism are not quite right, either. Salaita’s tweets frequently trade in a kind of anti-Zionist rhetoric that summons and sustains millennia of anti-Jewish sentiment hard-wired into Western culture. Nobody should be fooled when people adopt a posture akin to saying, “I am completely opposed to anti-Semitism, but I think Zionists would kill Jesus given half a chance.” There is a certain kind of person who, to paraphrase Marvell, doesn’t break his shins but by stumbling upon a Zionist. Steven Salaita may or may not be such a person; he certainly can tweet like one….

There is something about BDS that brings out the worst in people.

Or maybe it brings out who they really are, which is why I want them to keep telling us exactly how they feel.

It won’t be long now till they get the death panels up and running.

LOL, that bus has arrived at the station … the Left circulating David Duke. I am still shaking my head.

The Lancet has gotten more than a little weird of late.

This is the journal that published a crap article linking autism and vaccines that has had to be retracted, and which has meanwhile resulted in hazard to American school children.

This is also the journal that published a crap article about casualties in Iraq, which turned into a real outlier.

My definition of a crap article is one where the methodology does not pass even the most basic statistical smell test.

The Lancet is one of many publications and/or organizations that got hijacked and moved to the left.

I went and read the Telegraph article to which Prof. Jacobson linked, and what’s REALLY appalling is the comments of Dr. Horton, the editor, who seems to think that the authors behavior is just hunky-dory. Interestingly, Lancet is owned by a rather large publicly traded company, Reed Elsevier NV. A letter-writing campaign politely pointing out that Dr. Horton is devaluing their property by making it an anti-Semitic rag might yield some action. It’ll also be interesting to see if Elsevier has any corporate policies against racial/religious/ethnic discrimination…