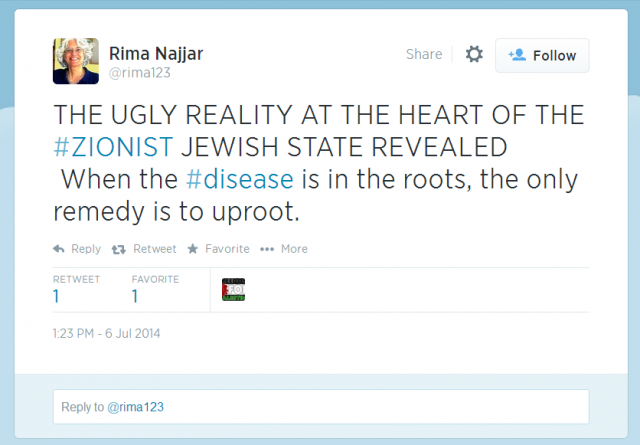 If reports are true, Steven Salaita’s horrific and bizarre Twitter feed cost him a job offer at U. Illinois at Urbana-Champaign.

As of this moment, the reason behind the denial of a position is not known, but that hasn’t stopped Salaita’s supporters from portraying the denial as based on Salaita’s anti-Israel views. As if there is some new blacklist against anti-Israel views, despite the fact that so many faculty members are anti-Israel and proud to express those views.

One thing about Salaita’s tweets — he said how he feels. And how he feels is that Israel should be destroyed (“decolonized” in his lingo).

That’s what the Boycott, Divest and Sanctions movement really is all about — it’s struggle until Israel is gone.

There are some naive dupes who actually believe that academic boycotts are about changing Israeli policies, but the leadership knows that it’s about destroying Israel.

The reaction to the denial of an offer to Salaita has been furious. One supporter of the academic boycott of Israel now wants a boycott of UI-Urbana-Champaign. Another professor is refusing to show his film there. The American Association of University Professors has weighed in against the denial, although it admits “a number of facts concerning this case remain unclear.”

There has been an attempt to portray Salaita as a world-reknowned scholar, but that’s an exaggeration. Most of his work was simply devoted to bashing Israel in a now-typical melding of political activism and academics.

Whether Salaita’s initial selection was political to begin with is being questioned.

Much of the organizing has been focused on a Petition for Corrective Action on Change.org posted by Rima Merriman: 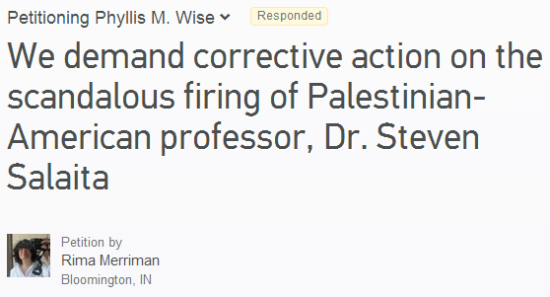 The University of Illinois at Urbana-Champaign has just severed their contract of employment with the brilliant, ethical, and prolific Dr. Steven Salaita for his political views on Israel, effectively firing him the very month he was to take up a tenured position there. This is also an insult to the Department of American Indian Studies that was not consulted in this administrative decision.

It appears that we live in a world where students get paid to post state propaganda while professors/journalists get FIRED for exposing it in the name of truth and justice.

We demand his immediate reinstatement.

For information about this case and academic freedom generally, please go to the U.S. Campaign for the Academic & Cultural Boycott of Israel website http://www.usacbi.org/

Note the last line. This is a BDS-motivated petition, not a petition for academic freedom for all. As I have pointed out recently, those who now invoke academic freedom to defend Salaita are among the worst destroyers of academic freedom through the academic boycott passed by the American Studies Association (with Salaita’s help) and some smaller groups.

As of this writing, the Petition has over 11,000 signatures. Most appear real, although there is some trolling in there. It’s hard to tell how many are faculty or students.

Merriman, who also is known as Rima Najjar (Merriman), is a BDS activist who calls for the destruction of Israel, and argues that Zionism is a disease.

Her Twitter feed was first brought to my attention by a tweet this morning from Professor Jonathan Marks of Ursinus College, who also frequently writes for Commentary Magazine and Minding the Campus.

Wow. The organizer of the pro-#Salaita petition seems like a real champ.https://t.co/pT51DxnCIl

THE UGLY REALITY AT THE HEART OF THE #ZIONIST JEWISH STATE REVEALED
When the #disease is in the roots, the only remedy is to uproot.

And another making her point clear:

Down w/ #Zionism & the #Jewish state at the heart of it. #Gaza #Zionism #HistoricPalestine #Occupation #RightOfReturn pic.twitter.com/8WHgScR1RL

No doubts about her goal. She’s not one of those “just get out of the West Bank, let’s live side by side in perfect harmony” types:

In #Haifa, #Jerusalem, #Hebron – in ALL the territories of #Palestine, #Zionism is indefensible! pic.twitter.com/V6DeZDv2Uz

Scrolling through her Twitter feed, it gets even worse. She is a promoter of the putrid Zionism=Nazism narrative so prevalent in anti-Semitic riots and violence around the globe.

#Israel's violence is all that was and all that remains. It makes no difference what #Palestinians do or don't do. pic.twitter.com/PS8chvSILb

She excused the kidnapping of three Israeli teens as justifiable retaliation, and tweeted that the Israelis were just getting a small taste of their own medicine:

When challenged, she stood by her position:

@RevoluZionist you dare to use the word "moral" when u Zionist lack every shred of morality and human decency? Zionism is indefensible!

#Terrorism is a social construct. Salute to the troops of the epic resistance & #sumoud in #Gaza, #Palestine #Hamas pic.twitter.com/11SPiyTaxg

She not interested in a resolution of the conflict short of the elimination of Israel:

We'll push the #Zionist colonizers back any way we can. One thing we will never do is accept our ongoing! #Palestine pic.twitter.com/vEYIRt5USJ

When the Pope, after visiting Palestinian areas, visited a memorial in Israel to the Israel victims of Palestinian terror, she mocked the visit and termed those Jewish victims to be the victims of Jewish terror:

Don’t get me wrong as to why I post these tweets.

I don’t want Merriman, or Salaita, or the others in the BDS movement to restrict their speech or stop telling us how they really feel.

Even if Merriman insists that “someone ought to shut up” UI-Urbana-Champaign Professor Cary Nelson, who thinks the University reached the right decision.

I want them to keep telling us how they really feel.

Because how they really feel is not what they tell to faculty and students on campuses and to community groups, who they try to dupe into thinking BDS is about changing Israeli policies and peace.

“scandalous firing” indeed. The guy resigned from his old position before the hiring process was complete. And she is a professor of English literature at Al Quds University! One would think she might be more vaguely familiar with the King’s English.

If he never had an official offer letter signed by an individual authorized to make the job offer [it is my understanding such a letter was never issued] and obviously he could not accept the position because there was no offer letter, then he could not have been fired.

The funniest thing is that the university that he quit thought he was so good that when he quit they were like ooops shit happens you can have your old job back …. HAHAHAHAHA.

This guy is a douche canoe and no one wants him. You know how I know this, because no university has come out of the wood work to give our poor down trodden loser a job.

Another piece of work, like the “brilliant, ethical, and prolific Dr. Steven Salaita” who she adores.

The hate in her heart is hard to understand, but is evident.

Yep. I WANT the full-tilt, no cuteness, pure-D hate to be clearly on display.

Let them feel VERY safe in telling everyone how they feel, without the varnish.

His specialty is Native Americans.

And as you might guess, his body of work is using the Euro slaughter of Native Americans as a metaphor to explain the Israeli-Pali conflict.

If only I had known… we were all sophomores in high school, smoking some weed after detention, and Bob says “Dude! Did you ever notice how the Palestinians are just like our Indians!”…and we were like “Wow! Thats deep Bob! Way cool and pass that bong” and quickly forgot. If only I had bothered to follow up that line of thought – I could have been hired to research it by the University of Illinois. Prob gotten tenure too. Like, Dude!

[…] Now it gets even more interesting. The person organizing a petition to get Salaita reinstated has made some rather derisive comments about Israel herself. Professor William Jacobson at Legal Insurrection reports: […]

Really special that the same milieus that want to boycott Israeli academics, and the very same media outlets that are constantly seeing racism and calling for sanctions against this one and that one for alleged racist commentary are now carrying on about free speech and “civility” because this antisemite didn’t get a job.

P.S. He was tweeting on Presidents’ Day that the U.S. should give its land back to the native Americans. Which ones. How does that work. (Here in Florida, the Seminoles are millionaires, gambling casino royalties.)

It is not him they are worried about, it’s their gravy train. If people start to look at the behavior of these “community organizers” who are scamming the system to finance their political activities, they lose their own jobs.

“I want them to keep telling us how they really feel.”

I am in furious agreement with you here. If we are to be true to the principle of free speech we can’t pick and choose. Also these views, no matter how bigoted, are better out in the open where everyone can see them.

I think UIUC should hire Salaita and live with the embarrassment.

Many “intellectuals” gingerly step around these issues without having the integrity to either fully embrace them or fully renounce them. Give Rima credit: like Hamas she makes her views clear.

The “brilliant, ethical” Steven Salaita? Whatever this witch is smoking it must be, in the words of George Carlin, “Good shit!” His tweets are rambling and plagued with misspellings and grammatical gaffs, as well as being hate mongering at its worst.

Why is it that none of these educated fleas can comprehend that the presumptive Palestinians were not “driven out” by Zionists, or anyone else. The nascent Israel’s neighbors blanketed the airwaves in ’48 advising Arabs and Muslims to leave so they wouldn’t get hurt when the “bastard Jew dogs” were driven into the sea. Israel’s leaders exhorted them to stay and help defend their mutual homeland but warned if they refused to defend the country and ran away instead they would not be allowed to come back.

Oops! The Arabs failed miserably in their effort to drive Jews into the sea, and true to their word the Israelis did not allow the runaway poltroons to come back. This is the true history of the “Palestinian refugee problem” and in my opinion Israel made the right call; if they ran away once, they were likely to do it again. The simple solution would have been for the countries who were responsible for their flight in the first place to make room for them, but when this was suggested it was met with a blanket refusal.

Anyone who truly believes this mess was caused by Israel is ignorant of the facts, doing some serious drugs, or is simply grabbing hold of the Islamic Supremacist bullshit to justify their own wish for the destruction of Israel … antisemitic bigots in short.