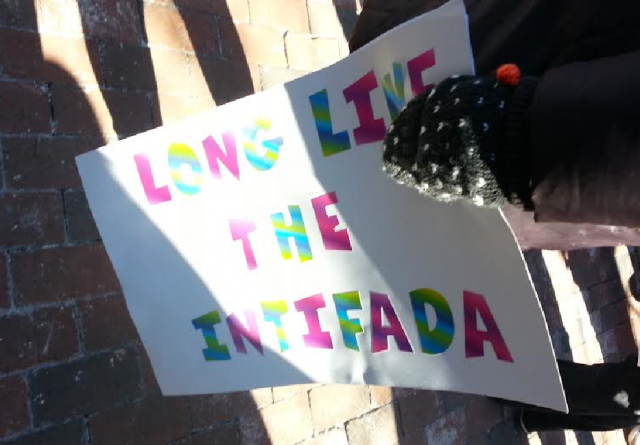 That group was Northeastern Students for Justice in Palestine (SJP).

Ilya Feoktistov has an excellent write-up on the group at FrontPage Mag, including images of its leader, law student Max Geller, wearing a Hezbollah t-shirt and carrying a weapon in the Palestinian Territories.

A rally in support of Northeastern SJP was held on March 18.

The rally was hyped in advance by anti-Israel websites like Mondoweiss and Electronic Intifada, and among branches at SJP at numerous universities. The co-sponsors included a wide range of left-wing groups:

The expectation was that there would be a mass rally.

It didn’t turn out that way. There were at most about 200 protesters according to participants.

It’s pretty obvious from photos and video that many if not most of the protesters were not even students, but a coalition of local (and rather aged) activists and some union members with gripes unrelated to Israel:

Calling the President of Northeastern a “Zionist Goon,” as reflected in the video, was bad enough, and was typical of the attacks.

Chanting “Long Live the Intifada” was much worse.  The Second Intifada alone caused the deaths of approximately 1000 Israelis and 3000 Palestinians.

Supporters of Venezuela and the Hugo Chavez socialism agenda were handing out flyers: 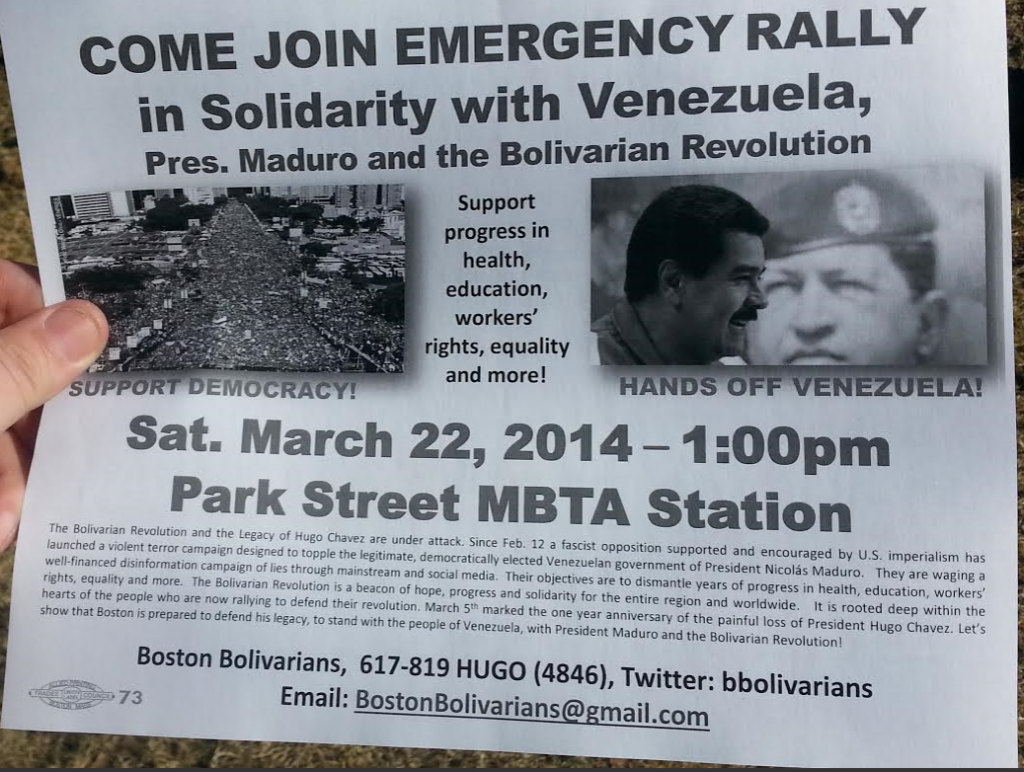 I guess there’s not going to be an academic boycott by this left-wing coalition of Venezuela, despite the crackdown on students and opposition groups.

These people are plain and simply crazy. The alternative is they’re knuckle dragging stupid.

I keep waiting for some modern history and political science teachers to show up and correct the historical lies these idiots propagate. Where are they, and why aren’t they doing their jobs? There are objective facts available, and yet these groups continually spout easily-disproved lies. Why do teachers allow this crap to go unchallenged?

These are not rhetorical questions. The lack of rigor and factual hygiene in our academic settings is evidence that we are wasting our money on our education system.

Stop waiting, Valerie. The people you are waiting on have caused the problem because they teach their political biases and prejudices rather than original documents and objective analysis of the same.

Israelis, you didn’t start the fire. Stand your ground.

They only chant “Long Live the Intifada” because chanting “Juden Raus” would show their true nature.
Different slogans, same hate.